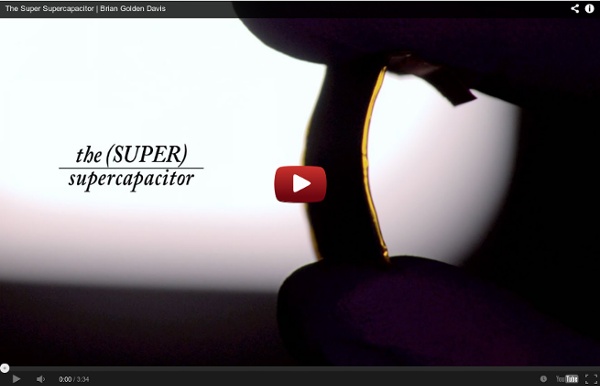 Graphene supercapacitor breaks storage record Researchers in the US have made a graphene-based supercapacitor that can store as much energy per unit mass as nickel metal hydride batteries – but unlike batteries, it can be charged or discharged in just minutes or even seconds. The new device has a specific energy density of 85.6 Wh/kg at room temperature and 136 Wh/kg at 80 °C. These are the highest ever values for "electric double layer" supercapacitors based on carbon nanomaterials. Supercapacitors, more accurately known as electric double-layer capacitors or electrochemical capacitors, can store much more charge than conventional capacitors. The new device was made by Bor Jang of US-based Nanotek Instruments and colleagues. The researchers coat the resulting slurry onto the surface of a current collector and assemble coin-sized capacitors in a glove box. Fast charging We believe that this is truly a breakthrough in energy technology Bor Jang, Nanotek Instruments The work was reported in Nano Letters.

Nanowires grown on graphene have surprising structure (Phys.org) —When a team of University of Illinois engineers set out to grow nanowires of a compound semiconductor on top of a sheet of graphene, they did not expect to discover a new paradigm of epitaxy. The self-assembled wires have a core of one composition and an outer layer of another, a desired trait for many advanced electronics applications. Led by professor Xiuling Li, in collaboration with professors Eric Pop and Joseph Lyding, all professors of electrical and computer engineering, the team published its findings in the journal Nano Letters. Nanowires, tiny strings of semiconductor material, have great potential for applications in transistors, solar cells, lasers, sensors and more. "Nanowires are really the major building blocks of future nano-devices," said postdoctoral researcher Parsian Mohseni, first author of the study. Li's group uses a method called van der Waals epitaxy to grow nanowires from the bottom up on a flat substrate of semiconductor materials, such as silicon.

Graphene Antennas Would Enable Terabit Wireless Downloads Want to wirelessly upload hundreds of movies to a mobile device in a few seconds? Researchers at Georgia Tech have drawn up blueprints for a wireless antenna made from atom-thin sheets of carbon, or graphene, that could allow terabit-per-second transfer speeds at short ranges. “It’s a gigantic volume of bandwidth. A terabit per second could be done at a range of about one meter using a graphene antenna, which would make it possible to obtain 10 high-definition movies by waving your phone past another device for one second. Graphene is a sheet of carbon just one atom thick, in a honeycomb structure, and it has many desirable electronic properties. To make an antenna, the group says, graphene could be shaped into narrow strips of between 10 and 100 nanometers wide and one micrometer long, allowing it to transmit and receive at the terahertz frequency, which roughly corresponds to those size scales. Of course, myriad challenges lie ahead.

'Soft' approach leads to revolutionary energy storage: Graphene-based supercapacitors Monash University researchers have brought next generation energy storage closer with an engineering first -- a graphene-based device that is compact, yet lasts as long as a conventional battery. Published today in Science, a research team led by Professor Dan Li of the Department of Materials Engineering has developed a completely new strategy to engineer graphene-based supercapacitors (SC), making them viable for widespread use in renewable energy storage, portable electronics and electric vehicles. SCs are generally made of highly porous carbon impregnated with a liquid electrolyte to transport the electrical charge. Known for their almost indefinite lifespan and the ability to re-charge in seconds, the drawback of existing SCs is their low energy-storage-to-volume ratio -- known as energy density. Low energy density of five to eight Watt-hours per litre, means SCs are unfeasibly large or must be re-charged frequently.

First inkjet-printed graphene computer circuit is transparent, flexible You can add another crazy characteristic to graphene’s ever-expanding list of “wonder material” properties: It can now be used to create flexible, transparent thin-film transistors… using an inkjet printer. The discovery comes from researchers at the University of Cambridge, UK, who were trying to ameliorate the lackluster performance of existing inkjet-printed electronics. As we covered last month, it’s possible to print standard CMOS transistors using different ferroelectric polymer inks, but the resultant circuit is so slow that it can’t actually function as a computer. If graphene could replace or augment the interconnects or transistors, these circuits would be a lot faster — and that’s what these Cambridge engineers have done. The actual meat of the discovery is that graphene has been successfully chipped off a block of graphite using a chemical solvent. Read more at arXiv.org and Technology Review, or check out our rather extensive graphene-related coverage

Graphene's love affair with water: Water filters allow precise and fast sieving of salts and organic molecules -- ScienceDaily Graphene has proven itself as a wonder material with a vast range of unique properties. Among the least-known marvels of graphene is its strange love affair with water. Graphene is hydrophobic -- it repels water -- but narrow capillaries made from graphene vigorously suck in water allowing its rapid permeation, if the water layer is only one atom thick -- that is, as thin as graphene itself. This bizarre property has attracted intense academic and industrial interest with intent to develop new water filtration and desalination technologies. One-atom-wide graphene capillaries can now be made easily and cheaply by piling layers of graphene oxide -- a derivative of graphene -- on top of each other. Two years ago, University of Manchester researchers discovered that thin membranes made from such laminates were impermeable to all gases and vapours, except for water. Small salts with a size of less than nine Angstroms can flow along but larger ions or molecules are blocked.

How do you manufacture huge amounts of graphene for a fraction of the cost? Printing presses Graphene, a one-atom-thick sheet of carbon atoms with amazing physical properties, could carry the digital world into an age beyond silicon. But it might be helped along by a technique borrowed from something quite analog: the newspaper printing press. Earlier this month, the National Science Foundation awarded University of Pennsylvania graphene startup Graphene Frontiers $744,600 to develop technology that makes it faster and cheaper to produce graphene on a large scale. I recently caught up with CEO Michael Patterson who described how roll-to-roll manufacturing will enable graphene to make its entrance into the big industries. Roll-to-roll manufacturing could allow graphene to be made at large scales. In 2010, it cost tens of thousands of dollars to manufacture a piece of graphene smaller than a postage stamp. Graphene Frontiers’ big contribution is that its method works at normal pressure, negating the need to make graphene in a vacuum. A sheet of graphene.

What is graphene? Here’s what you need to know about a material that could be the next silicon Graphene, an emerging material that could change the way electronic components are made and help computing performance continue to grow, is everywhere in the research world these days. This month alone, advancements suggested it could boost internet speeds, serve as a touch sensitive coating and extend the lives of computers. It is stronger than diamond and conducts electricity and heat better than any material ever discovered, and it will likely play an important role in many products and processes in the future. What is graphene? Graphene is made of a single layer of carbon atoms that are bonded together in a repeating pattern of hexagons. Carbon is an incredibly versatile element. These single layers of carbon atoms provide the foundation for other important materials. How was it discovered? Chances are good that you have made graphene many times in your life. Graphene was first studied theoretically in the 1940s. Why is it unusual? What can it be used for? What are the critiques?