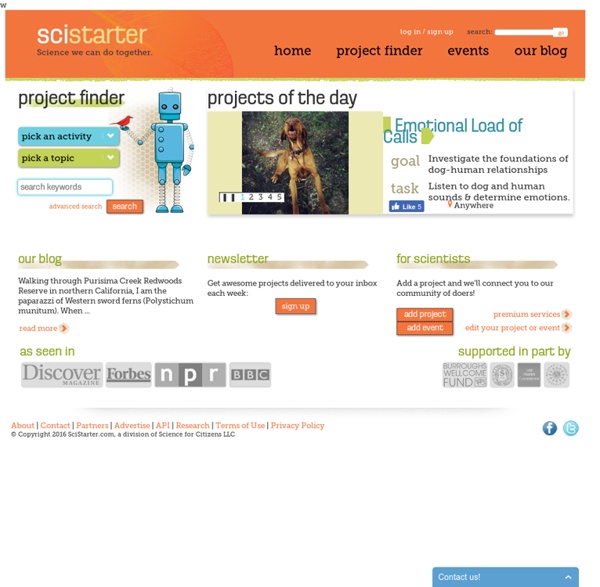 Create Something. Donate Login Remember Me Create An Account Forgot Password // Provide alternate content for browsers that do not support scripting // or for those that have scripting disabled. Magnifying the Universe Embed this infographic on your site! <iframe width="500" height="323" scrolling="no" src=" frameborder="0" allowfullscreen></iframe><br />Copyright 2012. <a href=" the Universe</a> by <a href=" Sleuth</a>. The above is an interactive infographic.

The Science Behind Foldit Foldit is a revolutionary new computer game enabling you to contribute to important scientific research. This page describes the science behind Foldit and how your playing can help. What is a protein? Proteins are the workhorses in every cell of every living thing. Your body is made up of trillions of cells, of all different kinds: muscle cells, brain cells, blood cells, and more. DataBase This is a database created in order to provide information related to the transcripctional regulation of three important bacteria: Escherichia coli K12, Salmonella typhimuriun LT2 and Pseudomona aeruginosa PA01. Get more information visiting our FAQs section. This is a data base that involves features related to transcriptional regulation on Escherichia coli K12 , Salmonella LT2 typhimuriun, Pseudomonas aeruginosa PA01 This organisms where selected because the information they generate every year is too much and it is not grouped. Also, they are model organisms for researching and is esential the easy obtention of infotmation about them.

NASA eClips™ NASA eClips™ are short, relevant educational video segments. These videos inspire and engage students, helping them see real world connections. Full Site Located: Grades K‑5 The Our World program supplements existing elementary learning objectives not only in science, technology, engineering and mathematics, but also in reading, writing, and visual and performing arts. Technology By the mid 20th century, humans had achieved a mastery of technology sufficient to leave the atmosphere of the Earth for the first time and explore space. Technology (from Greek τέχνη, techne, "art, skill, cunning of hand"; and -λογία, -logia[1]) is the making, modification, usage, and knowledge of tools, machines, techniques, crafts, systems, and methods of organization, in order to solve a problem, improve a pre-existing solution to a problem, achieve a goal, handle an applied input/output relation or perform a specific function. It can also refer to the collection of such tools, including machinery, modifications, arrangements and procedures.

Moonbase Alpha on Steam About This Game NASA has once again landed on the lunar surface with the goal of colonization, research, and further exploration. Shortly after the return to the Moon, NASA has established a small outpost on the south pole of the moon called Moonbase Alpha. Utilizing solar energy and regolith processing, the moonbase has become self-sufficient and plans for further expansion are underway. In Moonbase Alpha, you assume the exciting role of an astronaut working to further human expansion and research.

Discover the world's most endangered species Wildscreen's Arkive project was launched in 2003 and grew to become the world's biggest encyclopaedia of life on Earth. With the help of over 7,000 of the world’s best wildlife filmmakers and photographers, conservationists and scientists, Arkive.org featured multi-media fact-files for more than 16,000 endangered species. Freely accessible to everyone, over half a million people every month, from over 200 countries, used Arkive to learn and discover the wonders of the natural world. History of Newton's Papers (1727-1872) At his death on 20 March 1727,[1] Isaac Newton left papers relating to all areas of the intellectual pursuits he had followed since arriving at Trinity College, Cambridge, in the summer of 1661.[2] His friend, relative by marriage (to Newton's half-niece Catherine Barton) and successor at the Mint, John Conduitt, posted a bond for Newton's debts and claimed entitlement to this material, Newton having died intestate. As is evident from a number of manuscripts adorned with Conduitt's notes and corrections -- for example the manuscript of 'An historical account of two notable corruptions of Scripture in a Letter to a Friend' (now New College, Oxford, Ms. 361.4) -- he took a serious scholarly interest in the papers he had acquired, although this was also partly directed towards the possibility of their publication. Continue reading about the donation of Newton's scientific papers to Cambridge University in 1872 [12] S. Horsley, ed., Isaaci Newtoni Opera quæ exstant Omnia. [14] J.