I Didn't Know That - Concrete Tent 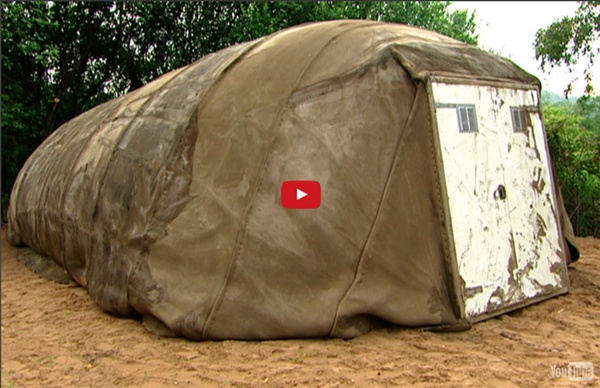 Bulletproof & Fireproof House Made From Used Plastic Bottles This 2 bedroom house built from recycled plastic bottles is bulletproof and fireproof and can withstand earthquakes. Oh, and it also reportedly holds a comfy year-round temperature of 64 degrees F. The bottles were filled with sand and are held together by mud and cement to form a solid wall that supposedly is stronger than cinder clocks. A man builds a wall with plastic bottles in the village of Sabon Yelwa. Nineteen-year old mason, Yahaya Musa, checks a wall of made of sand-filled plastic bottles in the village of Sabon Yelwa. “…the nearly-complete home is bullet and fireproof, earthquake resistant, and maintains a comfortable interior temperature of 64 degrees fahrenheit year round! The United States uses 129.6 Million plastic bottles per day! The article states it took about 14,000 bottles to build this home. The United States throws away enough plastic bottles to build 9257 of these 2 bedroom houses per day! References: via: Comments comments

Pallet House Build In the summer of 2011, volunteers from all over the country came together to build a house of pallets for a family on the Pine Ridge Reservation. The powerful experiences of living and working on the reservation were transformational for every participant of the build. Here in The U.S.A. there are so many places with codes and restrictions. If you work with the natives, there are terrific opportunities to build no code no restriction housing. There are many indigenous peoples who are far from commercial infrastructure making access to what most would consider "normal" stores or supplies quite difficult. We have seen many pallet houses which were just pallets, and not complete. The land is cleared and trench is dug for moisture / freeze barrier earth bag foundation

Strawbale Innovation in the UK I just spotted this on Shedworking.co.uk. It’s a tiny strawbale house offered by amazonails, the leading strawbale building company in the UK. This tiny house is their answer to a growing demand for tiny strawbale houses. Their website is filled with a lot of alternative building techniques like cement-free tire foundations and using lime instead of cement as a binder for stone and brick. If you’re in the UK, or are inclined to travel, you might want to enroll in one of their workshops or even hire them to consult on your strawbale project. New giant 3D printer can build a house in 24 hours (TruthSeekerDaily) Scientists claim to have developed a revolutionary new giant 3D concrete printer that can build a 2,500-square-foot house in just 24 hours. The 3D printer, developed by Professor Behrokh Khoshnevis from the University of Southern California, could be used to build a whole house, layer by layer, in a single day. The giant robot replaces construction workers with a nozzle on a gantry, which squirts out concrete and can quickly build a home based on a computer pattern, MSN News reported. It is “basically scaling up 3D printing to the scale of building,” said Khoshnevis. ‘Contour Crafting’ is a layered fabrication technology and has great potential for automating the construction of whole structures as well as sub-components, according to the project website. The potential applications of this technology are far reaching including in emergency, low-income, and commercial housing. With the process, large-scale parts can be fabricated quickly in a layer-by-layer fashion.

Natural Building Blog Hempcrete: The Green Movement returns to its Roots Smoking a rope made of modern, industrial hemp might cause a headache, but not much else. Why not build houses with it instead? As the Green Movement invents itself, builders are returning to old ideas. Three times more durable than concrete Some builders have found their way back to hemp, a fast-growing, highly sustainable plant that produces those famously long, tough fibres. While durability and insulation are the big two, hemp lends itself to greater versatility than just walls and insulation. Dismissing chemical fertilizers, pesticides & weed killers Perhaps more importantly, hemp farming doesn’t require chemical fertilizers, pesticides, or weed killers. Hempcrete has already found a home-building niche in the US, Canada, and Scotland. (thanks to Huffingtonpost.com for the images)

Recommissioned Silos - Life In A Roundhouse Round houses have been a successful design option for thousands of years. Wind passes around the building and finds no resistance. Round buildings achieve much higher wind ratings than traditional straight edged buildings. Round houses also have less surface area on the exterior making for a home that is easier to heat and cool. Enjoy 5 pages of fabulously designed roud silo homes! Monte-Silo House in Woodland, Utah.Two linked corrugated metal grain silosby Gigaplex Architects.montesilo.blogspot.com The south facing side of above silo house.Monte-Silo House in Woodland, Utahby Gigaplex Architects. Bed cubbies inMonte-Silo House in Woodland, Utahby Gigaplex Architects. Curved kitchen in Monte-Silo House in Woodland, Utahby Gigaplex Architects. Casa Futebol: Architects Want to Turn Brazil's Stadiums Into Affordable Housing Now that the World Cup euphoria is starting to settle down, the question remains-what will Brazil do with the 12 stadiums built for the massive sport event? Architects Axel de Stampa and Sylvain Macaux of 1Week1Project created hypothetical designs entitled Casa Futebol that propose to insert affordable housing units into the existing structures. As of this weekend, Brazil has to decide what to do with the stadiums and facilities built for the World Cup. Temporary buildings will be dismantled, some will be reused, but a large number of objects will have to be repurposed or demolished otherwise they will end up sitting vacant. Some of the stadiums might be converted into public parks, but one of the most cost effective reuse plans is based on the idea of keeping them as event-based venues. Related: Barcelona’s ‘Las Arenas’ Bullfighting Ring Transformed Into Epic Commercial Complex + 1Week1Project Via Gizmodo

Eco-Friendly Home Uses Only Straw for Heating and Cooling Students at Japan’s Waseda University are revolutionizing home heating by designing a home heated by actively decaying compost. The home, located on the island of Hokkaido in the town of Taiki-cho, is known as “A Recipe to Live.” The compost element of the home is not nearly as disgusting as it sounds. The hay ferments and composts using the bokashi method which produces very little odor. Aesthetically, the home is an exceptionally beautiful piece of architecture. (via: Inhabitat)