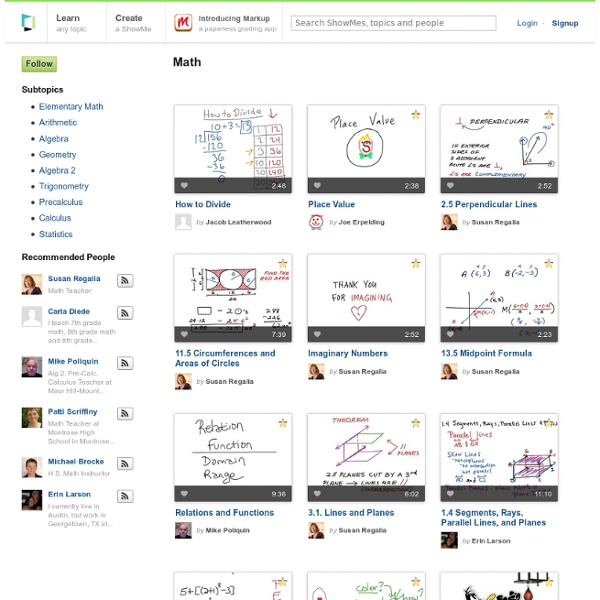 Yummy Math 21 Common Core-Aligned Math Apps for High School by edshelf: Reviews & recommendations of tools for education If your high school has adopted Common Core Standards and provides students with iPads (either 1:1 or via an iPad cart), you will need to find apps that map to these standards. And if you teach math, you are in luck. Math and engineering teacher Chris Beyerle from South Carolina curates this collection of math apps. These map to the eight Standards for Mathematical Practice. Which math apps do you use? 21 Common Core-Aligned Math Apps for High School Students From edshelf Murderous Maths: Tricks and Games! Do you want to be a mind reader? Or maybe have a brain that does lightning calculations? Or maybe you just want to make your friends feel silly! Here are a few of my sneakiest tricks, and don't worry - you don't need to be a maths genius to do them! Some of these tricks are in the Murderous Maths books, but here I can let you play on my special calculators and other computer gadgets! The Fiendish Football Team Illusion! Let Riverboat Lil READ YOUR MIND! The EIGHT QUEENS Puzzle! The 7-11-13 Trick (And other miracle sums) Pass your friends a calculator - and then make them feel really silly with these simple tricks! The Predictor Cards The trick with four cut-out cards, you pick a number from 1-16 and it mysteriously appears in a hole at the back! The Missing Digit Trick Your friend does a sum then crosses a digit out - you can tell what it is without looking! The Prime Numbers Trick Make a strange prediciton using the magic of PRIME NUMBERS. What were you like when you were born?

Online Math Practice - Free Math Help | iPracticeMath 5000 free math, physics, and engineering video tutorials and lectures | Mathematics and Multimedia Here are the collections of sites with math, physics, engineering, and other sciences video tutorials. Some sites also contains non-science videos as well. If you find a site with more than 50 videos, please inform me so I could include it on the list. Khan Academy – more than 2100 2600 not only for math but also includes other subjects such as economics, chemistry, physics and other fields. The math videos range from adding integers up to elementary calculus. Brightstorm - more than 500 math videos in algebra, geometry, Precaculus and Calculus.Just Math Tutorials – more than 1000 videos on algebra, geometry, trigonometry, calculus, differential equations, and linear algebraMIT Open Courseware – videos about math, engineering, sciences, and other fields.Free Video Lectures – more than 700 (excluding Khan Academy’s which they also listed) videos.

The Math Forum - Ask Dr. Math Ask Dr. Math® Thank you for your interest in Ask Dr. Math. We are no longer accepting new questions for this service. [Privacy Policy] [Terms of Use] Math Forum Home || Math Library || Quick Reference || Math Forum Search 14 Virtual Tools: Favorite Math Apps More and more classrooms are gaining access to technology that can be used with students. Whether you’re modeling a lesson, creating stations, or working in a one-to-one classroom, virtual tools can promote student engagement while increasing academic success. Here are some apps for iPads — along with a few other tips — that can transform your daily lessons and are definitely worth checking out! Base Ten Blocks Number Pieces is a great free app that allows every student with an iPad to have an endless number of base ten blocks at their fingertips. Whether they are learning basic place value, modeling how to add decimals, or exploring expanded notation, this app is worth looking into. Protractor Even on an iPad, a protractor can be used as a tool to measure angles. Graph Paper Geometry Pad lets children draw lines and shapes on graph paper. Geoboard Say goodbye to rubber bands! Ruler Ruler is a neat app to try out on your iPad — it simply turns your screen into a ruler. Pattern Shapes Clock

Math Play Math Jeopardy Games Are you looking for free math jeopardy games? These exciting games about different mathematical concepts are excellent for practice and review. The games can be played alone or in teams; therefore they make good classroom activities. Play these free and interactive jeopardy games! 2D Shapes Jeopardy Game Multiplication Jeopardy Game Decimals Jeopardy Game Factors and Multiples Jeopardy Game Fractions Jeopardy Game Fractions Decimals Percents Jeopardy Game Comparing Rational Numbers Exponents Jeopardy Game Integers Jeopardy Game Angles Jeopardy Game Coordinate Plane Jeopardy Game 7th Grade Algebra Jeopardy Numbers and Operations Jeopardy Pythagorean Theorem Jeopardy GCF Jeopardy Game Return from Math Jeopardy Games to Math Play homepage. Math Tests and Quizzes That Are Aligned Core Math Curriculum Math Tests and Topic/Skill Based Quizzes We now have a full line of tests for each section of the common core curriculum. Test are fully available to members for immediate download. There is a test sampler in each section for those who haven't signed up yet and want to see what it is all about. Tests By Grade Level Kindergarten Level - You'll find a multiple choice version, short response, and all 5 individual content areas in their own quiz.Grade 1- The level of the material seems very difficult for first graders, but it is perfectly aligned.Grade 2- The extended response test form is difficult for most students at this level.Grade 3- Geometry comes to life, at least a little more.