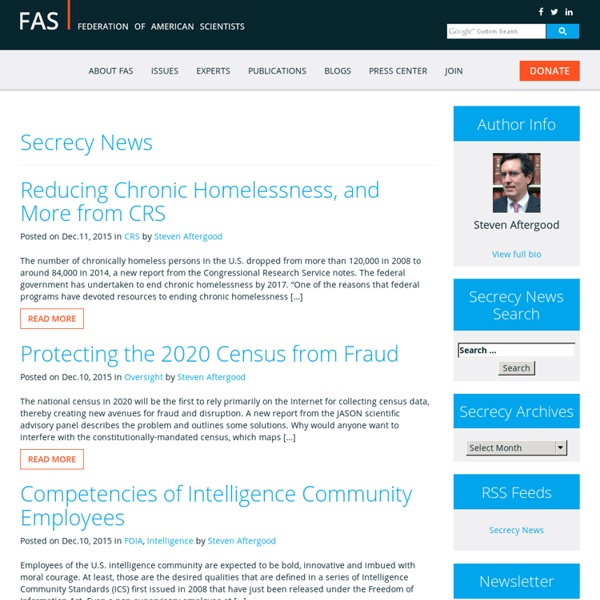 The number of chronically homeless persons in the U.S. dropped from more than 120,000 in 2008 to around 84,000 in 2014, a new report from the Congressional Research Service notes. The federal government has undertaken to end chronic homelessness by 2017. “One of the reasons that federal programs have devoted resources to ending chronic homelessness […] Read More The national census in 2020 will be the first to rely primarily on the Internet for collecting census data, thereby creating new avenues for fraud and disruption. A new report from the JASON scientific advisory panel describes the problem and outlines some solutions. Read More Employees of the U.S. intelligence community are expected to be bold, innovative and imbued with moral courage. Read More Read More A newly updated Department of Defense publication affirms the importance of public outreach, not simply as a gesture towards democratic governance, but also as an instrument of operational utility. Read More Read More Read More

Related:  A Drone for US of A & Drones for All • US of A and What You may Face • A Citizen's Rights in the US of A

Origins of C.I.A.’s Not-So-Secret Drone War in Pakistan Photo Nek Muhammad knew he was being followed. On a hot day in June 2004, the Pashtun tribesman was lounging inside a mud compound in South Waziristan, speaking by satellite phone to one of the many reporters who regularly interviewed him on how he had fought and humbled ’s army in the country’s western mountains. He asked one of his followers about the strange, metallic bird hovering above him. Mississippi State Penitentiary Mississippi State Penitentiary (MSP), also known as Parchman Farm, is the oldest prison and the only maximum security prison for men in the state of Mississippi, USA.[2] Begun with four stockades in 1901, the Mississippi Department of Corrections facility was constructed largely by state prisoners; it is located on about 28 square miles (73 km2) in unincorporated Sunflower County,[3][4] in the Mississippi Delta region. It has beds for 4,840 inmates. Inmates work on the prison farm and in manufacturing workshops.

Christopher Elliott: When You Should Stand Up To The TSA Francisco Canseco took a stand when a TSA agent tried to give him an enhanced pat-down last spring. Canseco, who happens to also be a Texas congressman, objected to the agent's forceful frisking, and a few days later, to being singled out for a secondary screening. Police had to be called in that incident. A report published by the San Antonio Express-News last week, which retrieved an incident report under the Freedom of Information Act, paints a complex picture of Rep. Canseco's confrontation: A legislator who had already taken a public stand on the agency's effectiveness -- or lack thereof -- and airport agents who may have wanted to show the congressman who's in charge.

Thomas P.M. Barnett Cartoon found here (in an FT op-ed that fits this post nicely - if orthogonally). Read through a variety of the tenth-year anniversary reviews, and I thought Thomas Friedman's was the best - despite the weird title (Democrats, Dragons or Drones?). His basic notion that it takes the next generation to create and shape the subsequent reality is correct. Friedman pegs it at "9 months and 21 years to develop." Fair enough.

Predator Drone Nominated For Nobel Peace Prize OSLO, NORWAY — The General Atomics MQ-1 Predator unmanned drone was nominated Monday for the 2013 Nobel Peace Prize for its unrelenting pursuit of peace and tranquility in under-governed spaces around the globe, the Nobel Foundation announced. “The prize is awarded annually to recipients who have displayed an abiding commitment to ridding the world of conflict,” according to Nils Droppenhammer of the Nobel Foundation. “The Predator has shown an unwavering dedication to seeking out and eliminating sources of badness everywhere, but particularly in fragile states where its impact is felt more intimately.” Between 2004 and 2013, The Predator single-handedly reduced the number of opponents to world peace by no less than 1,533, with some estimates putting the number as high as 2,500. Conducting hundreds of missions daily, the remotely piloted drone and its peace-seeking missiles are capable of bringing instant tranquility to multiple villages and/or pickup trucks simultaneously.

Judge Orders Inmate's Release After More Than 40 Years In Solitary Confinement NEW ORLEANS (AP) — The last of the "Angola Three" inmates, whose decades in solitary confinement on a Louisiana prison farm drew international condemnation and became the subject of two documentaries, was ordered released Monday. The ruling would free 68-year-old Albert Woodfox after more than 40 years in solitary, which human rights experts have said constitutes torture. U.S.

Don't be a Petraeus: A Tutorial on Anonymous Email Accounts Tomorrow, as the Senate Judiciary Committee considers reforming the decades-old federal email privacy law, the personal Inboxes and love lives of senior military and intelligence figures may be on that august body's mind. When the FBI pored through the personal lives of CIA Director David Petraeus, Paula Broadwell, Jill Kelly and General John Allen, citizens across the land began to wonder how the FBI could get that kind of information, both legally and technically. So, just how do you exchange messages with someone, without leaving discoverable records with your webmail provider?

Foreign Policy: The 10 Worst Predictions for 2008 1 Scott Gries/Getty Images If [Hillary Clinton] gets a race against John Edwards and Barack Obama, shes going to be the nominee. Gore is the only threat to her, then. Barack Obama is not going to beat Hillary Clinton in a single Democratic primary. Ill predict that right now. Obama’s drone war kills ‘others,’ not just al Qaida leaders WASHINGTON — Contrary to assurances it has deployed U.S. drones only against known senior leaders of al Qaida and allied groups, the Obama administration has targeted and killed hundreds of suspected lower-level Afghan, Pakistani and unidentified “other” militants in scores of strikes in Pakistan’s rugged tribal area, classified U.S. intelligence reports show. The administration has said that strikes by the CIA’s missile-firing Predator and Reaper drones are authorized only against “specific senior operational leaders of al Qaida and associated forces” involved in the Sept. 11, 2001, terror attacks who are plotting “imminent” violent attacks on Americans. “It has to be a threat that is serious and not speculative,” President Barack Obama said in a Sept. 6, 2012, interview with CNN. “It has to be a situation in which we can’t capture the individual before they move forward on some sort of operational plot against the United States.”

Stop and identify statutes States (colored red) in which Stop and Identify statutes are in effect as of February 20th, 2013. "Stop and identify" statutes are statute laws in the United States that authorize police[1] to legally obtain the identification of someone whom they reasonably suspect has committed a crime. Police–citizen encounters[edit] In the United States, interactions between police and citizens fall into three general categories: consensual ("contact" or "conversation"), detention (often called a Terry stop, after Terry v.