A new dawn of communication. Drones Overhead, Seeing Everything, Always: Inside Google and Facebook’s Latest Acquisitions. Imagine a fleet of drones, overhead, out of sight, tens of thousands of feet in the sky. 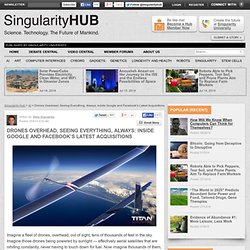 Imagine those drones being powered by sunlight — effectively aerial satellites that are orbiting constantly, never having to touch down for fuel. Now imagine thousands of them, perhaps tens of thousands of them, with cameras and radio repeaters on board. Such a fleet could image everything, all the time, everywhere, at high-resolution. They could also provide low-cost communications — effectively cellphone towers 60,000 feet tall. This vision of the future, is why both Google and Facebook are fighting to buy the technology.

Recently, Google (outbid Facebook and) purchased Titan Aerospace — a drone company — for $60M. As we’ve discussed at Abundance 360, there are two key trends emerging: (1) Global Connectivity: We are heading from a world of 2 billion connected to the internet (in 2010) to at least 5 billion by 2020. Hope this insight about the future is useful to you. [image: Titan Aerospace] Titan Aerospace - Solar Atmospheric Satellites. Wireless devices go battery-free with new communication technique. We might be one step closer to an Internet-of-things reality. 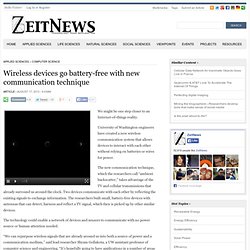 University of Washington engineers have created a new wireless communication system that allows devices to interact with each other without relying on batteries or wires for power. The new communication technique, which the researchers call “ambient backscatter,” takes advantage of the TV and cellular transmissions that already surround us around the clock. Two devices communicate with each other by reflecting the existing signals to exchange information. The researchers built small, battery-free devices with antennas that can detect, harness and reflect a TV signal, which then is picked up by other similar devices. The technology could enable a network of devices and sensors to communicate with no power source or human attention needed. The researchers published their results at the Association for Computing Machinery’s Special Interest Group on Data Communication 2013 conference in Hong Kong, which began Aug. 13.

Balloons, drones, satellites: what does the future of the internet look like? The internet may feel like it's everywhere, but large pockets of sky, swathes of land and most of the oceans are still beyond a signal's reach. 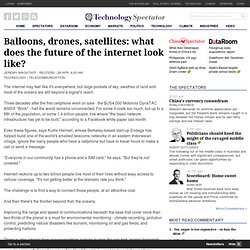 Three decades after the first cellphone went on sale - the $US4,000 Motorola DynaTAC 8000X "Brick" - half the world remains unconnected. For some it costs too much, but up to a fifth of the population, or some 1.4 billion people, live where "the basic network infrastructure has yet to be built," according to a Facebook white paper last month. Even these figures, says Kurtis Heimerl, whose Berkeley-based start-up Endaga has helped build one of the world's smallest telecoms networks in an eastern Indonesian village, ignore the many people who have a cellphone but have to travel hours to make a call or send a message.

"Everyone in our community has a phone and a SIM card," he says. "But they're not covered. " Heimerl reckons up to two billion people live most of their lives without easy access to cellular coverage. First Balloons and Drones, Now Dirigibles: The Race for a Truly ‘World Wide’ Web. Facebook wants to be as cool as Google. 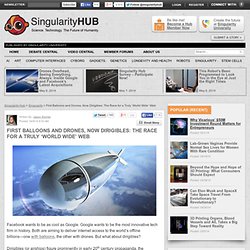 Google wants to be the most innovative tech firm in history. Both are aiming to deliver internet access to the world’s offline billions—one with balloons, the other with drones. But what about dirigibles? Dirigibles (or airships) figure prominently in early 20th century propaganda, the adventures of Indiana Jones, and alternate universes (see the TV show Fringe).

But excepting eye-in-the-sky ads at sporting events, the dirigible is largely out of fashion. Space firm, Thales, thinks that needs to change. The maker of commercial satellites knows well the cost of putting hardware into orbit. At 20 kilometers, StratoBus would operate above commercial airliners and below space divers (see Felix Baumgartner). Powered propellers will keep StratoBus stationary in high winds. Unlike Google Loon, StratoBus would be a stationary system. We like the idea. Solar Impulse solar powered plane. Likely, this early in the game, cost isn’t remotely calculable. Google Acquires Titan Aerospace, The Drone Company Pursued By Facebook. Google has acquired Titan Aerospace, the drone startup that makes high-flying robots which was previously scoped by Facebook as a potential acquisition target (as first reported by TechCrunch), the WSJ reports. 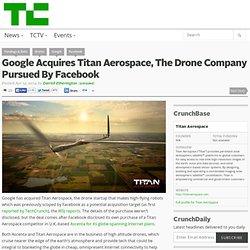 The details of the purchase weren’t disclosed, but the deal comes after Facebook disclosed its own purchase of a Titan Aerospace competitor in U.K. -based Ascenta for its globe-spanning Internet plans. Both Ascenta and Titan Aerospace are in the business of high altitude drones, which cruise nearer the edge of the earth’s atmosphere and provide tech that could be integral to blanketing the globe in cheap, omnipresent Internet connectivity to help bring remote areas online. According to the WSJ, Google will be using Titan Aerospace’s expertise and tech to contribute to Project Loon, the balloon-based remote Internet delivery project it’s currently working on along these lines.