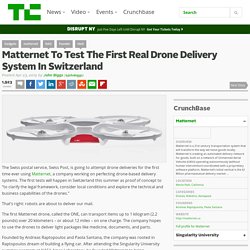 The first tests will happen in Switzerland this summer as proof of concept to “to clarify the legal framework, consider local conditions and explore the technical and business capabilities of the drones.” That’s right: robots are about to deliver our mail. The first Matternet drone, called the ONE, can transport items up to 1 kilogram (2.2 pounds) over 20 kilometers – or about 12 miles – on one charge. The company hopes to use the drones to deliver light packages like medicine, documents, and parts. Founded by Andreas Raptopoulos and Paola Santana, the company was rooted in Raptopoulos dream of building a flying car. Matternet previously tested its drones in Haiti where it delivered medicine and supplies to inaccessible areas. “Our product is vertically integrated into a complete transportation solution. Amazon Begins Testing Its Drone Delivery System In Canada. According to a report from The Guardian, it seems that Amazon has decided to test out its drone delivery system over in Canada after facing some initial reluctance from the US authorities. 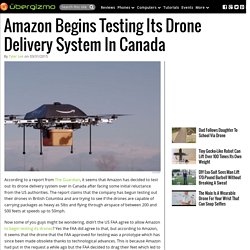 The report claims that the company has begun testing out their drones in British Columbia and are trying to see if the drones are capable of carrying packages as heavy as 5lbs and flying through airspace of between 200 and 500 feets at speeds up to 50mph. Now some of you guys might be wondering, didn’t the US FAA agree to allow Amazon to begin testing its drones? Yes the FAA did agree to that, but according to Amazon, it seems that the drone that the FAA approved for testing was a prototype which has since been made obsolete thanks to technological advances. 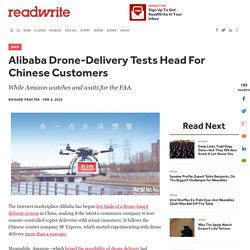 It follows the Chinese courier company SF Express, which started experimenting with drone delivery more than a year ago. Meanwhile, Amazon—which hyped the possibility of drone delivery last November—has yet to receive approval for similar U.S. tests involving actual customers. While the company has been testing its proposed Prime Air service on its own U.S. property and in unspecified overseas locations, there's so far no indication that it's delivered test packages to urban residents the way Alibaba is doing. See also: Why We Need A New Word For Drones Here's what Alibaba is doing, per Bloomberg: 37 Critical Problems that need to be Solved for Drone Delivery to become Viable. It all started when Toni, one of our staffers working on our flying drone workshop, asked me a simple question. 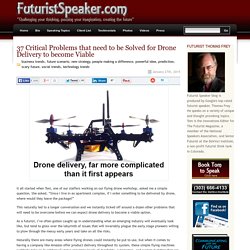 She asked, “Since I live in an apartment complex, if I order something to be delivered by drone, where would they leave the package?” This naturally led to a longer conversation and we instantly ticked off around a dozen other problems that will need to be overcome before we can expect drone delivery to become a viable option. As a futurist, I’ve often gotten caught up in understanding what an emerging industry will eventually look like, but tend to gloss over the labyrinth of issues that will invariably plague the early stage pioneers willing to plow through the messy early years and take on all the risks. For example, early stage drone delivery will require a pilot for every package, making it an expensive option. Domino's Tests Delivery of Pizza by Remote-Controlled Drone. 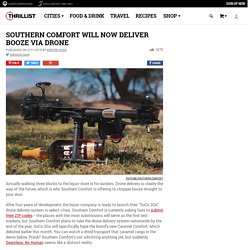 Google Admits Secretly Testing a Drone Delivery System. Google revealed that it has been developing a drone delivery system in the Australian outback, codenamed Project Wing. 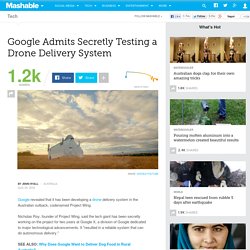 Nicholas Roy, founder of Project Wing, said the tech giant has been secretly working on the project for two years at Google X, a division of Google dedicated to major technological advancements. It "resulted in a reliable system that can do autonomous delivery. " In a video released on YouTube Thursday, Google said it is "developing a delivery system that uses self-flying vehicles. " 'Project Wing': Google Unveils New Drone-Delivery System. Move aside, Amazon: Google has revealed its own top-secret drone project. 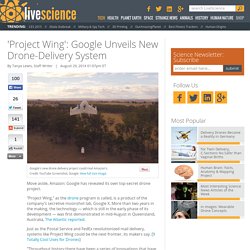 "Project Wing," as the drone program is called, is a product of the company's secretive moonshot lab, Google X. More than two years in the making, the technology — which is still in the early phase of its development — was first demonstrated in mid-August in Queensland, Australia, The Atlantic reported. Just as the Postal Service and FedEx revolutionized mail delivery, systems like Project Wing could be the next frontier, its makers say. [9 Totally Cool Uses for Drones] "Throughout history there have been a series of innovations that have each taken a huge chunk out of the friction of moving things around," Astro Teller, the leader and so-called "Captain of Moonshots" at Google X, said in a YouTube video. Burrito Bomber: The world's first airborne Mexican food delivery system. Earlier this year, the world was brought to its knees when it was cruelly teased with the promise of tasty Mexican treats being delivered via quadcopter. 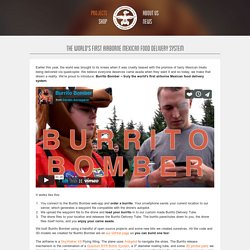 We believe everyone deserves carne asada when they want it and so today, we make that dream a reality. Amazon can now start testing out a drone delivery system in the US. Amazon has won a license from the US Federal Aviation Administration to start testing a drone program. 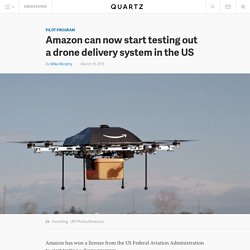 The “experimental airworthiness certificate” was awarded to Amazon logistics, the shipping arm of Amazon. Test flights must be operated during the daytime, and all data about the flights must be shared monthly with the FAA. Also, in keeping with regulations pushed through in February, the aerial equipment must remain in view of its operators at all times—a requirement that some thought would hamper the company’s development plans.