Herzog & de meuron + ai weiwei's hansel & gretel installation opens in NYC. Art in the drone age. Taken from the June 2013 issue of Dazed: The future rarely comes to pass the way we imagine, or, more accurately, as we hope for. 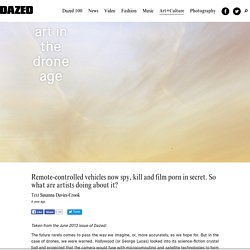 But in the case of drones, we were warned. Hollywood (or George Lucas) looked into its science-fiction crystal ball and projected that the camera would fuse with microcomputing and satellite technologies to form the foreboding symbol of our time: the unmanned aerial vehicle, or drone. A Self-Organising Drone Army Dances with Humans. A swarm of semi-autonomous drones feature in this multimedia dance where they're paired with a group of humans, reacting to the movements of the lead dancer. 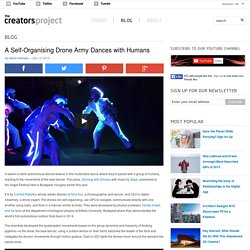 The piece, Dancing with Drones, with music by Zagar, premiered at the Sziget Festival held in Budapest, Hungary earlier this year. It is by Collmot Robotics whose artistic director is Nina Kov, a choreographer and dancer, and CEO is Gábor Vásárhely, a drone expert. The drones are self-organizing, use GPS to navigate, communicate directly with one another using radio, and flock in a manner similar to birds. They were developed by physics professor Tamás Vicsek and his team at the department of biological physics at Eötvös University, Budapest where they demonstrated the world's first autonomous outdoor flock back in 2014. NIna Kov and lead dancer. Drones have been used a lot in art, but they've also developed a notorious reputation thanks to their use by the US military. 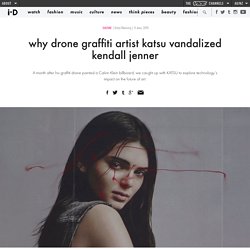 But while a shiny new Kendall face has replaced the vandalized original, and the media machine has moved on to the exuberance of her ponytails and her inner cowgirl, KATSU's painting raises some meaningful questions about the future of art and technology. KATSU's work emerged on New York City's streets in the late 90s. Blending traditional methods of graffiti writing with a conceptual focus, his approach to renegade artmaking has resulted in transforming fire extinguishers into graffiti tools and more recently, 3D printing crack cocaine. The Age of Drone Vandalism Begins With an Epic NYC Tag. In the early hours of Wednesday morning, the age of robotic graffiti was born. 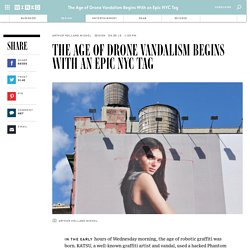 KATSU, a well-known graffiti artist and vandal, used a hacked Phantom drone to paint a giant red scribble across Kendall Jenner’s face on one of New York City’s largest and most viewed billboards. By all accounts, it is the first time that a drone has been deployed for a major act of public vandalism. In April last year, KATSU made headlines when he demonstrated that he had figured out how to attach a spray can to an off-the-shelf DJI Phantom drone.

At the time, he was only using the drone to paint canvasses for white-wall galleries. But he assured the world that soon he would take his mad invention out into the streets and create enormous tags in places that were previously inaccessible to even the most daring and acrobatic taggers. The rise of drones - The Space. You’ll see them on YouTube playing catch or delivering pizzas. 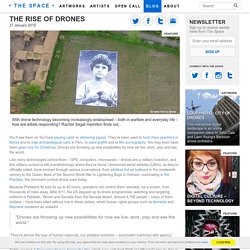 They’ve been used to hunt rhino poachers in Kenya and to map archaeological ruins in Peru, to paint graffiti and to film pornography. You may even have been given one for Christmas. Giving Up Control: Two Artists Who Do Drones Differently. Two recent New York exhibitions put a new spin on the specter of the drone within art and technology. 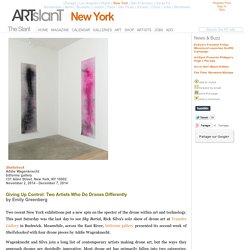 This past Saturday was the last day to see Sky Burial, Rick Silva's solo show of drone art at Transfer Gallery in Bushwick. Meanwhile, across the East River, bitforms gallery presented its second week of Shellshocked with four drone pieces by Addie Wagenknecht. Black Hawk Paint : ADDIE WAGENKNECHT. Black Hawk Paint paintings and performance 2007 - ongoing Started in 2007/2008 and as an ongoing experiment Black Hawk Paint paints with a drone as brush. 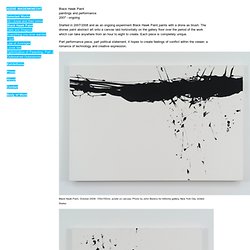 The drones paint abstract art onto a canvas laid horizontally on the gallery floor over the period of the work which can take anywhere from an hour to eight to create. Each piece is completely unique. "Black Hawk Paint" (2008) by Addie Wagenknecht. Now Even Drones Are Taking Selfies. While Italian artist group IOCOSE aren’t yet full-blown tricksters in the vein of Cattelan and Ferrari, and certainly won't admit to it, works that include sneaking real sunflowers seeds into Ai Wei Wei’s Sunflower Seeds exhibition and attempting to accelerate Earth’s rotation are, to the casual observer, often quite funny. 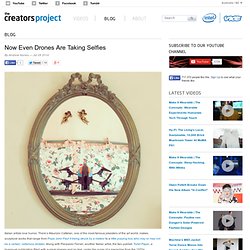 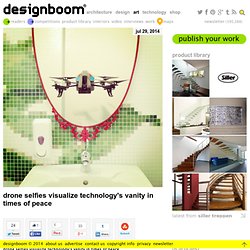 IOCOSE are a group of italian artists who are popularizing this new wave of social picture sharing as it relates to technology, hitting some poignant marks regarding peace, politics and the potential ‘life’ of these devices along the way.