Certification and Law - from Heliguy Quadcopter SUAS. Uk and Europe Any work being conducted for commercial purposes with any kind of unmanned aerial system is subject to regulations introduced by the CAA that require operators to obtain permission from them. 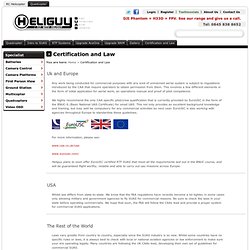 This involves a few different elements in the form of initial application for aerial work, an operations manual and proof of pilot competence. Aeronavics – Advanced Aerial Solutions. This is a quick guide for those new to Multi-Rotor craft offering some basic safety and operational procedures …and are recommended standard operating procedures for those piloting Aeronavics or any multi-rotor craft. 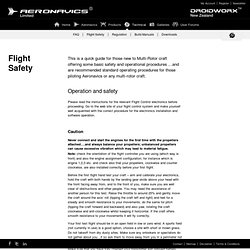 Operation and safety Please read the instructions for the relevant Flight Control electronics before proceeding. Go to the web site of your flight control system and make yourself well acquainted with the correct procedure for the electronics installation and software operation. Caution Never connect and start the engines for the first time with the propellers attached….and always balance your propellers; unbalanced propellers can cause excessive vibration which may lead to material fatigue. Before the first flight hand test your craft – arm and calibrate your electronics, hold the craft with both hands by the landing gear skids above your head with the front facing away from, and to the front of you, make sure you are well clear of obstructions and other people. 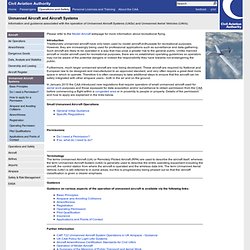 Introduction Traditionally unmanned aircraft have only been used by model aircraft enthusiasts for recreational purposes. However, they are increasingly being used for professional applications such as surveillance and data-gathering. Such aircraft are likely to be operated in a way that may pose a greater risk to the general public. Unlike manned aircraft or model aircraft used for recreational purposes, there are no established operating guidelines so operators may not be aware of the potential dangers or indeed the responsibility they have towards not endangering the public.

Furthermore, much larger unmanned aircraft are now being developed. Taking Flight: Drone Photography & Video with Jeff Foster. Aerial photography and videography captures some of the most stunning images out there, but the tools, techniques, and gadgets used to capture the action are often confusing and difficult to master. 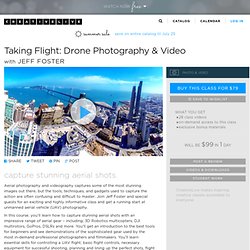 Join Jeff Foster and special guests for an exciting and highly informative class and get a running start at unmanned aerial vehicle (UAV) photography. In this course, you'll learn how to capture stunning aerial shots with an impressive range of aerial gear – including; 3D Robotics multicopters, DJI multirotors, GoPros, DSLRs and more. You'll get an introduction to the best tools for beginners and see demonstrations of the sophisticated gear used by the most in-demand professional photographers and filmmakers. Legal News & Info About Drones, UAVs and Remote-Controlled Model Aircraft by Peter Sachs, Esq. UK UAV Regulations Explained. I had a look around the site, and it seems that the discussion on UAV regulation is mostly centred around America and the FAA. 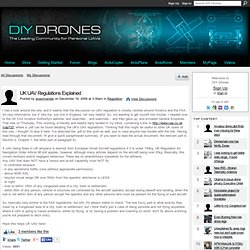 All very informative, but if, like me, you live in England, not very helpful. So, not wanting to get myself into trouble, I headed over to the UK Civil Aviation Authority's website, and searched... and searched... and then gave up, and e-mailed General Enquiries. That was on Thursday. This morning, a friendly and helpful reply landed in my inbox, containing a link to where a .pdf can be found detailing the UK's UAV regulations.

Thinking that this might be useful to other UK users of this site, I thought I'd drop it here. A UAV being flown in UK airspace is exempt from European Small Aircraft regulations if it is under 150kg. So, basically very similar to the FAA regulations, but still, it's always better to check. Transport Risk Management - Aviation Insurance. Build Your Own Drone - Amateur UAV & Drone Autopilot Kits from DJI Innovations & 3D Robotics. FPV UK Store, Membership. Members Insurance. A question that is regularly asked of the office staff is "When does insurance cover start when I join the BMFA? 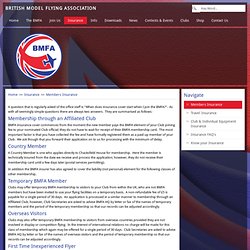 ". As with all seemingly simple questions there are always two answers. They are summarised as follows: Membership through an Affiliated Club BMFA insurance cover commences from the moment the new member pays the BMFA element of your Club joining fee to your nominated Club official; they do not have to wait for receipt of their BMFA membership card. The most important factor is that you have collected the fee and have formally registered them as a paid up member of your Club.

Country Member A Country Member is one who applies directly to Chacksfield House for membership. In addition the BMFA insurer has also agreed to cover the liability (not personal) element for the following classes of other membership. Outlook.com (7) - runningrocker. Guide for Unmanned Aerial Filming and Videography Work UK - Quadcopters.co.uk. 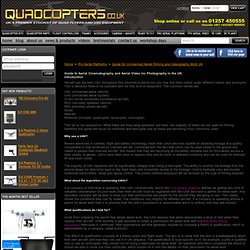 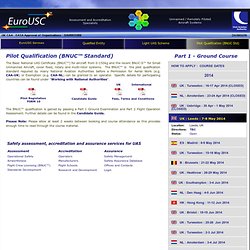 The BNUC™ is the pilot qualification standard required by many National Aviation Authorities before a Permission for Aerial Work (e.g. CAA-UK) or Exemption (e.g. CAA-NL) can be granted to an operator.