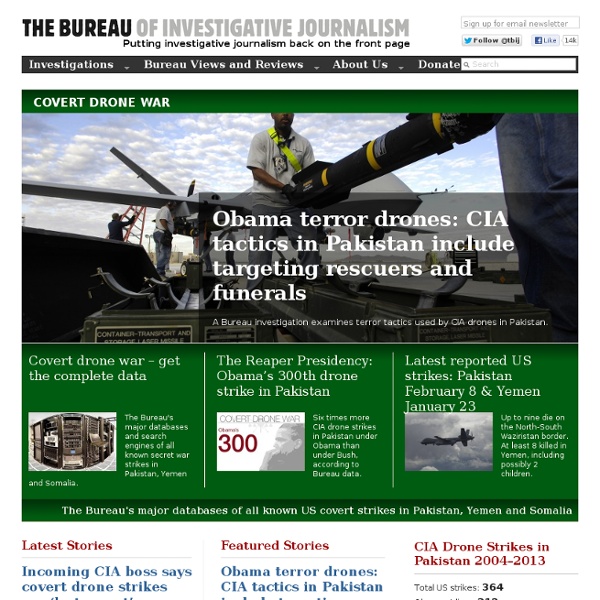 Related:  Obama's war by drone • wayoflife • A Drone for US of A & Drones for All • The Drone War

More than 2,400 dead as Obama’s drone campaign marks five years Obama has launched over 390 covert drone strikes in his first five years in office (Pete Souza/White House). Five years ago, on January 23 2009, a CIA drone flattened a house in Pakistan’s tribal regions. It was the third day of Barack Obama’s presidency, and this was the new commander-in-chief’s first covert drone strike.

Taste for Makers February 2002 I was talking recently to a friend who teaches at MIT. His field is hot now and every year he is inundated by applications from would-be graduate students. Origins of C.I.A.’s Not-So-Secret Drone War in Pakistan Photo Nek Muhammad knew he was being followed. On a hot day in June 2004, the Pashtun tribesman was lounging inside a mud compound in South Waziristan, speaking by satellite phone to one of the many reporters who regularly interviewed him on how he had fought and humbled ’s army in the country’s western mountains. He asked one of his followers about the strange, metallic bird hovering above him. Less than 24 hours later, a missile tore through the compound, severing Mr. Muhammad’s left leg and killing him and several others, including two boys, ages 10 and 16.

US drone strikes listed and detailed in Pakistan, Somalia and Yemen Spies in the sky. Click image to embiggen Are drone attacks becoming the face of modern warfare? The Bureau of Investigative Journalism has collected the comprehensive database of reported drone attacks. President Obama's new normal: the drone strikes continue There has been yet another violent attack with mass casualties. This was not the act of a lone gunman, or of an armed student rampaging through a school. It was a group of families en route to a wedding that was killed. The town was called Radda – not in Colorado, not in Connecticut, but in Yemen. The weapon was not an easy-to-obtain semiautomatic weapon, but missiles fired from US drones.

11 Profiles in Bad Leadership Behavior CIO — Most of us have worked for a bad supervisor at one point in our lives. (If you haven't, consider yourself very lucky.) Perhaps they yelled a lot and kept everyone walking on egg shells, or maybe they couldn't or wouldn't articulate what they expected. However it manifests itself, bad leadership can kill your company's productivity and can spread like a cancer. The important thing for your career goals is that you don't let yourself fall into any of these bad management traps. Just because you hold a leadership position doesn't mean you are a good leader.

Predator Drone Nominated For Nobel Peace Prize OSLO, NORWAY — The General Atomics MQ-1 Predator unmanned drone was nominated Monday for the 2013 Nobel Peace Prize for its unrelenting pursuit of peace and tranquility in under-governed spaces around the globe, the Nobel Foundation announced. “The prize is awarded annually to recipients who have displayed an abiding commitment to ridding the world of conflict,” according to Nils Droppenhammer of the Nobel Foundation. “The Predator has shown an unwavering dedication to seeking out and eliminating sources of badness everywhere, but particularly in fragile states where its impact is felt more intimately.” Between 2004 and 2013, The Predator single-handedly reduced the number of opponents to world peace by no less than 1,533, with some estimates putting the number as high as 2,500.