US of A and What You may Face 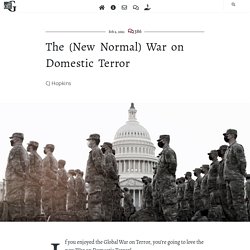 According to a “National Terrorism Advisory System Bulletin” issued by the DHS on January 27, these DCEs, HVEs, VCTEs, VRDEs, IMAEs, and PWMLFUs are. Never Forget How The MSM Smeared Assange: Notes From The Edge Of The Narrative Matrix. The frenetic mass media propaganda campaign against Julian Assange was easily the creepiest and most Orwellian thing I’ve ever witnessed. 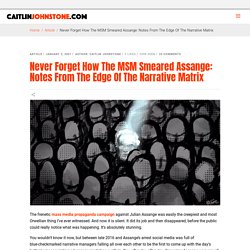 And now it is silent. It did its job and then disappeared, before the public could really notice what was happening. It’s absolutely stunning. A judge had to order ICE to do the bare minimum to protect detainees against COVID-19. ICE has been endangering both detainees and employees by refusing to back down from its mass detention policies, with ICE even showing this intentional disregard during lawsuit proceedings. 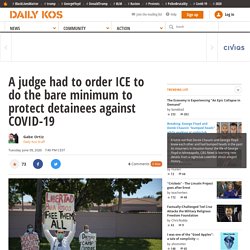 When Deivys Perez Valladares, currently jailed at the Krome Processing Center in Miami-Dade, testified in a virtual hearing, he said the guard standing next to him hadn’t bothered with putting on a mask. “Yes I am scared,” he said according to Miami Herald. “Like right now, the ICE official who is here with me, he doesn’t have a mask on.” Another man, Alejandro Ferrera Borges, testified that the Broward Transitional Center in Pompano Beach sometimes “runs out of the travel-sized shampoo bottles they are given once a week,” the report continued. So basically ICE and its $8 billion annual budget is forcing detained people and their advocates to have to go to court for weeks and months to fight for what are crumbs compared to its vast resources in order to try to stay safe. US government drops case against Max Blumenthal after jailing journalist on false charges. As the mysterious disappearance of Secret Service records and complete absence of evidence supporting its case came to light, the US government dropped its bogus charges against journalist Max Blumenthal. 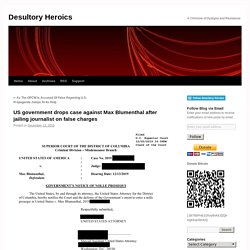 By Ben Norton Source: Grayzone The US government has dropped its bogus charge of “simple assault” against journalist Max Blumenthal, after having him arrested on a 5-month-old warrant and jailed for nearly two days. The Grayzone has learned that Secret Service call logs recorded during the alleged incident were either not kept or destroyed. MSM Defends CIA’s “Whistleblower”, Ignores Actual Whistleblowers. These pictures of overcrowded Border Patrol facilities are downright horrifying. The Office of the Inspector General of the U.S. 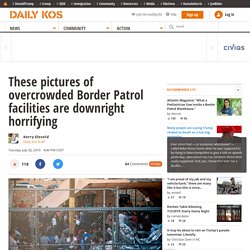 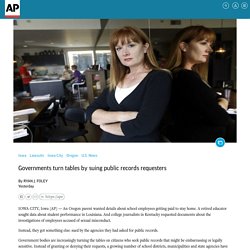 A retired educator sought data about student performance in Louisiana. And college journalists in Kentucky requested documents about the investigations of employees accused of sexual misconduct. Instead, they got something else: sued by the agencies they had asked for public records. Government bodies are increasingly turning the tables on citizens who seek public records that might be embarrassing or legally sensitive. Instead of granting or denying their requests, a growing number of school districts, municipalities and state agencies have filed lawsuits against people making the requests — taxpayers, government watchdogs and journalists who must then pursue the records in court at their own expense.

The lawsuits generally ask judges to rule that the records being sought do not have to be divulged. The lawsuits have been denounced by some courts and policymakers. The FBI Pressured a Lonely Young Man Into a Bomb Plot. He Tried to Back Out. Now He’s Serving Life in Prison. Harlem Suarez was an unlikely jihadi. 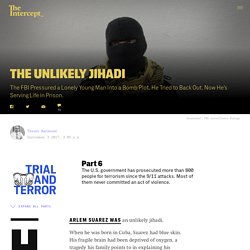 When he was born in Cuba, Suarez had blue skin. His fragile brain had been deprived of oxygen, a tragedy his family points to in explaining his lifelong social and intellectual challenges. As a child, Suarez also suffered several significant head injuries, including being struck by a brick and falling off motorcycles without a helmet on. His parents brought him to Key West, Florida, in 2004, when he was 12 years old. Jeff Sessions' DOJ To Put Woman Who Laughed At Jeff Sessions On Trial Yet Again. Photo accidentally reveals UK determination to give Assange no way out. By Robert Booth, The GuardianFriday, August 24, 2012 19:19 EDT It is the “restricted” official document that sums up the Metropolitan police’s tactics towards Julian Assange. 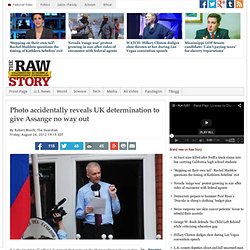 “Action required: Assange to be arrested under all circumstances,” says the handwritten note that was photographed under a policeman’s arm on Friday detailing a “summary of the current position” on Assange’s exile inside the Ecuadorean embassy in Knightsbridge. It is no surprise that a fugitive from a European arrest warrant that demands removal to Sweden to face allegations of rape and sexual assault should face such a fate.

Police officers are stationed right up against the front and back of the embassy where Assange has sought sanctuary and he recently claimed to have heard them “swarming” behind the fire escape. Leaked Documents Reveal Counterterrorism Tactics Used at Standing Rock to “Defeat Pipeline Insurgencies” A shadowy international mercenary and security firm known as TigerSwan targeted the movement opposed to the Dakota Access Pipeline with military-style counterterrorism measures, collaborating closely with police in at least five states, according to internal documents obtained by The Intercept. 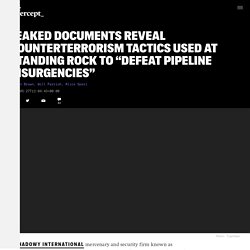 The documents provide the first detailed picture of how TigerSwan, which originated as a U.S. military and State Department contractor helping to execute the global war on terror, worked at the behest of its client Energy Transfer Partners, the company building the Dakota Access Pipeline, to respond to the indigenous-led movement that sought to stop the project. Internal TigerSwan communications describe the movement as “an ideologically driven insurgency with a strong religious component” and compare the anti-pipeline water protectors to jihadist fighters. TigerSwan did not respond to a request for comment.

A Reporter Was Arrested for Asking Secretary Tom Price a Question. In a day of truly cinematic developments from the executive branch, one nearly slipped by. 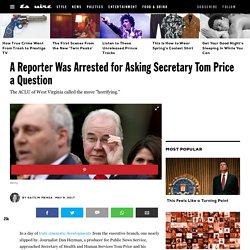 Journalist Dan Heyman, a producer for Public News Service, approached Secretary of Health and Human Services Tom Price and his colleague Kellyanne Conway at the capitol building in West Virginia to ask them a question about the American Health Care Act. A few minutes later, he was arrested. Advertisement - Continue Reading Below Preliminary eye-witness reports suggest that capitol police were unaware Heyman was a member of the press. Exclusive: Watch Lady Gaga Question Julian Assange in Ecuadorian Embassy - Rolling Stone. Laura Poitras started filming Julian Assange six years ago when the Wikileaks founder was still operating out of a supporter's home in Norfolk, England under house arrest, while he waited to be questioned by Swedish authorities about allegations of rape, molestation and coercion made against him by two women in Sweden. Her new film, titled Risk, out Friday in New York, follows Assange as he prepares to barricade himself inside the Ecuadorian Embassy to avoid extradition.

She revisits him there periodically over the next five years, where, among other private moments, Poitras captures a bizarre visit from Lady Gaga who, in the context of the film, materializes inside the embassy apropos of seemingly nothing. "I think it's really funny and surreal and the sort of disconnect is great. And I also think it’s revealing about him," Poitras tells Rolling Stone of the scene.

Sessions: Arresting Julian Assange Is Now a Priority for U.S. Months after then-presidential candidate Donald Trump declared “I love WikiLeaks” at a campaign rally, Attorney General Jeff Sessions told reporters the arrest of the rogue website’s founder, Julian Assange, has become a top priority for U.S. prosecutors. “We are going to step up our effort and already are stepping up our efforts on all leaks,” Sessions told a press conference in El Paso, Texas, on Thursday. “This is a matter that’s gone beyond anything I’m aware of. We have professionals that have been in the security business of the United States for many years that are shocked by the number of leaks and some of them are quite serious.”

Nobody Knows What Trump's Customs And Border Agents Are Doing At LAX. Milwaukee Sheriff David Clarke Threatens To 'Knock Out' Man Who Accused Him Of Harassment. Police Attacked Standing Rock Activists For Hours. Why Are They Calling It A Riot? In a video streamed live on Facebook on the night of November 20, an army of riot police stand guard as fire hoses blast anti–Dakota Access pipeline activists on a bridge near Standing Rock in the subfreezing cold. Scenes of distress and chaos follow. A breathless medic describes seeing mass hypothermia and severe hand and head injuries from rubber bullets. Two soaking wet young men complain of being gassed with smoke bombs, tear gas, and mace.

A man shot in the head by a rubber bullet is bandaged and carted away in a hatchback. Untitled. WikiLeaks’ October Surprise Explains Why Assange Was Just Silenced. Wikileaks continues dropping bombshell revelations in its coordinated October Surprise of documents and emails hacked from Hillary Clinton campaign chair John Podesta — so many, in fact, it has been difficult to keep up. Damning best describes information released so far — damning not only for Clinton, but countless top U.S. politicians, officials, the FBI, the State Department, President Obama, corporate media, Big Banks, and nearly innumerable others. Taibbi on Amy Goodman Arrest for Covering Dakota Pipeline Story - Rolling Stone. A little over a month ago, private security guards working on behalf of the Dakota Access pipeline company clashed with Native Americans.

A UC Berkeley student whose family fled Iraq in 2002 after his diplomat father was killed under Saddam Hussein’s regime, was booted from a Southwest Airlines flight and questioned by the FBI after another passenger heard him speaking Arabic, NBC Bay Area reports. How to Avoid Going to Jail under 18 U.S.C. Section 1001 for Lying to Government Agents.

Solomon L. Public School Students Are the New Inmates in the American Police State. By John W. Why the Darknet Matters. By Luther Blissett and Fernando Villalovs of Arkesoul In February 2015 Ross Ulbricht was convicted of money laundering, computer hacking and conspiracy to traffic narcotics for his role (either with or as Dread Pirate Roberts) in creating and administrating the darknet market Silk Road. For this, U.S. District Judge Katherine Forrest sentenced Ulbricht to life in prison without possibility for parole. 'Clock kid' Ahmed Mohamed demands $15M from city, school. Ordeals of Whistleblowers in a 'Democracy' The Digital Dog Ate Our Civil Liberties Homework: 'It’s Just the Way It Is' How A Teenage Girl Who Gave An 'Intimidating Look' Was Sentenced Up To 5 Years In Prison.

“Pastafarian” wins right to wear strainer on government ID. Jailed Journalist Barrett Brown Faces 105 Years For Reporting on Hacked Private Intelligence Firms. So let me get this straight, we fast track renditions but hunt down whistleblowers on presidential planes! Attempted Set-Up of We Are Change's Luke Rudkowski. What big secret did a 4-star general reveal? One Era's Traitor Is Another Era's Whistle-Blower - By J. Dana Stuster.

Craigslist Proved My Innocence Against A Felony Charge. China Releases Its 2012 Report On Human Rights In The United States. War on Whistleblowers: How the Obama Administration Destroyed Thomas Drake For Exposing Government Waste. Your Papers, Please: Man Deals with “Immigration Checkpoint” 350 Miles Away from Border. Ex-Goldman programmer rejects plea deal with NY - lawyer. Wikileaks Was Just a Preview: We're Headed for an Even Bigger Showdown Over Secrets. Www.fas.org/sgp/othergov/intel/leak-poly.pdf. Feds Add New Espionage Act Charge Against Linguist. The Danger of Suppressing the Leaks. Big Brother, Kill Lists, and Secrecy: What to Expect from Obama’s Second Term. The New Political Prisoners: Leakers, Hackers and Activists. Supreme Court Rejects Challenge to Surveillance Law. The NDAA and the Death of the Democratic State.