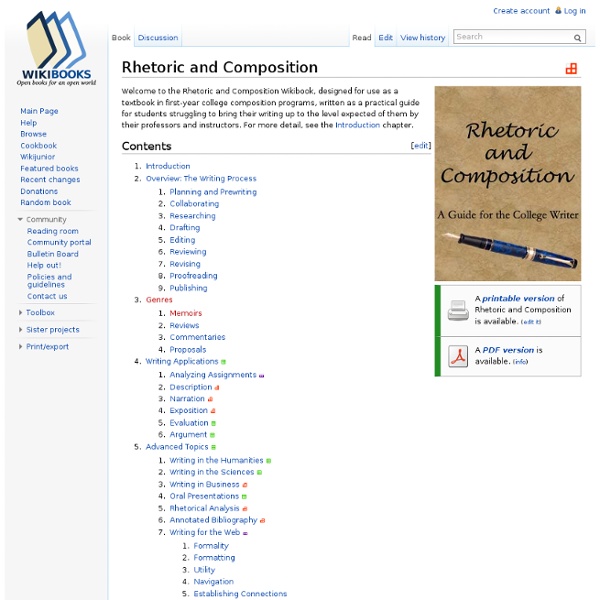 English Grammar (Wikibooks) This Wikibook is designed to teach standard English Grammar as taught in English-speaking countries. Although the English page has a separate section for grammar, it seems harder to follow if you are using it for self study or classroom use. If you plan on taking a course for grammar, this resource may help. The layout and structure is based upon the 1963 edition of Warriner's English Grammar and Composition, but does not use any resources or text derived from that resource. Contents[edit] Related books[edit] Welcome to Awareness Magazine, Southern California's Guide to Conscious Living The Language of the Birds Coming Into Resonance with Mother Earth as We Speak (and Write) By Laurel Airica Speak a new language so the world will be a new world.” — Rumi A concept that has gone in and out of fashion among linguists for decades is that words affect perceptions. So, what would you do if you knew that the words in your mind-mouth-ears — and throughout the at-most-fear — were literally ‘bugged?’ As one who has spent a lifetime playing in the magical undercurrent of word symbols and sounds, I have come to the conclusion that English is largely a fear-based language of limitation and persuasion toward conformity and mediocrity. Betrayed By Our Own Tongue “The Women say the language you speak poisons your glottis tongue palate lips. Consider the sad ring of ‘mourning’ that greets us each new day as we come ‘a wake’ from our nightly immersion in our personal Life’s Dream. What a somber vision of a fallen life such words conjure together when shown in trance-lation. “…. 1 See Dr.

American Enlightenment, 1760s-1820s (Wikibooks) The French and Indian War, which began in 1754, served its purpose in making the colonists feel that they were one people. At this time most of them were living on the seacoast from Georgia to Maine, and had not yet even crossed the great Appalachian range of mountains. The chief men of one colony knew little of the leaders in the other colonies. This war made George Washington known outside of Virginia. The French and Indian War, which decided whether France or England was to be supreme in America, exposed the colonists to a common danger. All of the colonies had been under English rule, although they had in large part managed in one way or another to govern themselves. Freneau, a poet of the Revolution, thus expresses in verse some of these events: "When a certain great king, whose initial is G, Shall force stamps upon paper and folks to drink tea; When these folks burn his tea and stampt paper like stubble, You may guess that this king is then coming to trouble." "Mr.

American Colonial Lit, 1620s-1776 (Wikibooks) The British claimed most of the Atlantic seaboard north of Florida as belonging to Britain soon after Columbus discovered land across the Atlantic Ocean. Henry VII sent John Cabot to chart out the "regions or provinces of the heathen and infidel, whatsoever they may be" as early as 1497. However, circumstances never arose for England to make good on her claims until late during Elizabeth's reign. When England finally did establish her first permanent settlement in 1607 in Jamestown, Virginia, and a few years later in Massachusetts, her primary motives were: 1) the monarchical desire to expand the empire, 2) the people's longing for land to cultivate, 3) treasure and adventure, 4) a nation's desire to be rid of excess populations, such as debtors, prisoners, and unemployed youths, 5) expand commerce through trade, and 6) freedom of religious practice. The literature produced in the part of America known as the United States did not begin as an independent literature.

The 7 Story Archetypes, and How They Can Dramatically Improve Your Marketing. Did you know that there are only 7 basic plotlines throughout all story telling? Christopher Booker author of The 7 basic plots distills all of story telling to 7 basic archetypes that make up all of storytelling throughout history. The 7 story archetypes are: Overcoming the MonsterRags to RichesThe QuestVoyage and ReturnComedyTragedyRebirth Now why do I tell you this? How does this possibly relate to marketing? Well, actually it has everything to do with marketing. And in each of these types of stories, there are individual characters that play a huge role in the development to how that chapter in your personal story plays out. Ever meet the wise stranger that gave sagely advice out of nowhere when you needed it the most? The reason I bring this up is because your customers are going through one of these plot lines at this very moment in their lives. Overcoming the Monster In the stories, this is where the hero must destroy the monster to restore balance to the world. Rags to Riches The Quest

What is writing? Writing is a method of representing language in visual or tactile form. Writing systems use sets of symbols to represent the sounds of speech, and may also have symbols for such things as punctuation and numerals. Definitions of writing systems Here are a number of ways to define writing systems: a system of more or less permanent marks used to represent an utterance in such a way that it can be recovered more or less exactly without the intervention of the utterer. From: Daniels, Peter T. & Bright, William, The world's writing systems, P.3 (Oxford, Oxford University Press, 1996) a set of visible or tactile signs used to represent units of language in a systematic way, with the purpose of recording messages which can be retrieved by everyone who knows the language in question and the rules by virtue of which its units are encoded in the writing system. From: Coulmas, Florian, The Blackwell Encyclopedia of Writing Systems (Oxford, Blackwell, 1999), P.560 See also

Resources for Writing Fiction UPDATE 1/10: Dead links removed, new links added, as well as Revision and Tools and Software sections. Are you still stuck for ideas for National Novel Writing Month? Or are you working on a novel at a more leisurely pace? Here are 102 resources on Character, Point of View, Dialogue, Plot, Conflict, Structure, Outlining, Setting, and World Building, plus some links to generate Ideas and Inspiration. Also, I recommend some resources for Revision and some online Tools and Software. Too many links? 10 Days of Character Building Name Generators Name Playground The Universal Mary Sue Litmus Test Priming the idea pump (A character checklist shamlessly lifted from acting) How to Create a Character Seven Common Character Types Handling a Cast of Thousands – Part I: Getting to Know Your Characters It’s Not What They Say . . . Establishing the Right Point of View: How to Avoid “Stepping Out of Character” How to Start Writing in the Third Person Web Resources for Developing Characters Speaking of Dialogue

The WWW Virtual Library 7 ways writing by hand can save your brain It's time to put pen to paper. Our tech-dependent society has put keyboards at the tips of our fingers at all times, from our smartphones to our laptops. But when was the last time you wrote by hand? Science shows that handwriting can benefit our minds in a number of ways. We spoke to Dr. 1. Writing a calming sentence is a form of graphotherapy, Seifer says. "This actually calms the person down and retrains the brain," Seifer says. 2. Writing something in cursive, that beautiful archaic form, can coordinate the left brain and right brain. 3. For young children, writing by hand is an imperative tool in improving cognitive skills. 4. Taking pen to paper inspires more creative thought, because it is a slower process than just typing something on a keyboard, Seifer says. 5. Writing by hand is a great tool for baby boomers who want to keep their minds sharp as they get older. 6. Let's say you're taking notes in class. 7. "One key difference is movement. Have something to add to this story?

Creative Writing These OWL resources will help you with the basics of creative writing. This section includes resources on writing poetry, fiction, and creative nonfiction. Fiction Writing Basics This resource discusses some terms and techniques that are useful to the beginning and intermediate fiction writer, and to instructors who are teaching fiction at these levels. Pattern and Variation in Poetry A brief rundown on the basic concepts of pattern and variation and how they can be used when writing poems. Pattern and Variation: Aural A brief exploration of the various aspects of sound that can be utilized when making a poem. Pattern and Variation: Visual A brief exploration of the various visual aspects that can be utilized when making a poem. Characters and Fiction Writing These resources discuss character creation and development in fiction writing. Poetry Writing The following resource provides the reader with a better understanding of invention and invention strategies for poetry writing.