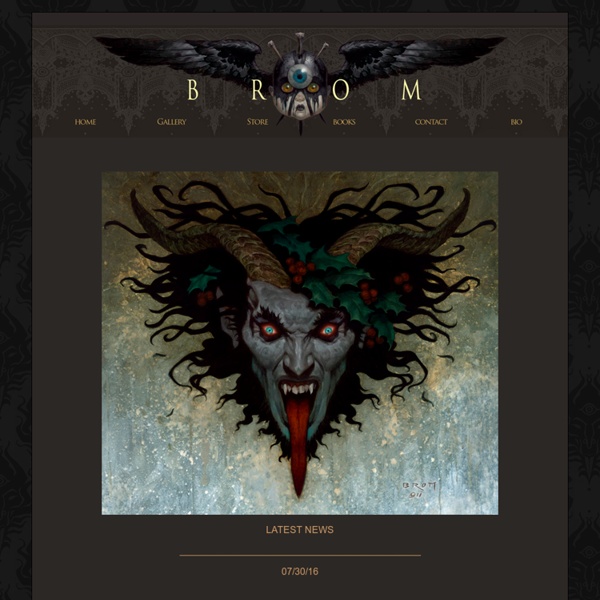 Rhys Cooper Beyond The Pale now has Foo Fighters gig posters for their Melbourne & Brisbane shows created by Rhys Cooper. On sale now HERE. “Foo Fighters – Melbourne 2018″ by Rhys Cooper. 12″ x 36” 6-color Screenprint. Ed of 395. $45 “Foo Fighters – Brisbane 2018″ by Rhys Cooper. 12″ x 36” 6-color Screenprint. The 100 Best Books of All Time Many publishers have lists of 100 best books, defined by their own criteria. This article enumerates some lists of "100 best" books for which there are fuller articles. Among them, Science Fiction: The 100 Best Novels (Xanadu, 1985) and Modern Fantasy: The 100 Best Novels (Grafton, 1988) are collections of 100 short essays by a single author, David Pringle, with moderately long critical introductory chapters also by Pringle.

John Walker's Shop “Eye of a Necromancer” Now available, faux fresco pieces of the famed, (and fictitious) collection of historical artifacts and oddities owned by the dark and mysterious Mr Victor W. Dankquart. Above each sculpted eye is painted the quarter moon mark, identifying the wearer as a necromancer, with a beetle below the eye thought to designate speciality. These fragments are assumed to have been parts of much larger murals which paid tribute to the magical talents of village necromancers.

The Very Secret Diaries Welcome! Here you may find the brilliant "Very Secret Diary" series by the wonderful Cassandra Claire. These are also published in her LiveJournal, but she was kind enough to agree to let your humble servant here publish them here. Enjoy! And do be sure to check out her LiveJournal. Nicolas Delort - Illustration Inception - private commission Isle of the Dead - Black Dragon Press The Bride of Frankenstein - Dark Hall Mansion Frankenstein - Dark Hall Mansion 28 Things That I Have Learned On The Trail by Kimberlie Dame Kimberlie Dame and I connected on Facebook. She is an experienced backpacker who is planning a three-year hiking trip starting in the spring of 2012. I asked her to share what she has learned so far from her journey so far. She listed 28 things. She'll share them after I ask her three questions: Francis Tapon: How did you learn about Hike Your Own Hike?

A Clockwork Orange Film critic, Pauline Kael, writes a lot about how little she thinks of Kubrick’s creation. Literal-minded in its sex and brutality, Teutonic in its humor, Stanley Kubrick’s A Clockwork Orange might be the work of a strict and exacting German professor who set out to make a porno-violent sci-fi Comedy. Is there anything sadder — and ultimately more repellent — than a clean-minded pornographer? The numerous rapes and beatings have no ferocity and no sensuality; they’re frigidly, pedantically calculated, and because there is no motivating emotion, the viewer may experience them as an indignity and wish to leave. The movie follows the Anthony Burgess novel so closely that the book might have served as the script, yet that thick-skulled German professor may be Dr. Strangelove himself, because the meanings are turned around.

Strange Gods It’s been quiet around here this week, but here’s a shot of what I’ve been up to. Hopefully this giant monstrosity will be finished within the next few days, and I can set myself upon the next. Anonymous said: WHAT IS YOUR OPINION ON THE SKELETON WAR My family, everyone I know are all at least half skeleton. 10 great science fiction novels that have been banned @djscruffy: And that's why you're a heathen and should be burned at the stake. @djscruffy: In defense of public schools, I would suggest that the reason many of these books are challenged so often is that they're frequently included in school curriculums and libraries. I grew up in a state that, according to these links, engaged in book-burning less than a decade before my birth.

What I Learned from Harry Potter Harry Potter has been a part of my life since I was in high school. I've read the books, seen the movies too many times to count and my daughter is a huge fan. It's become part of who I am.