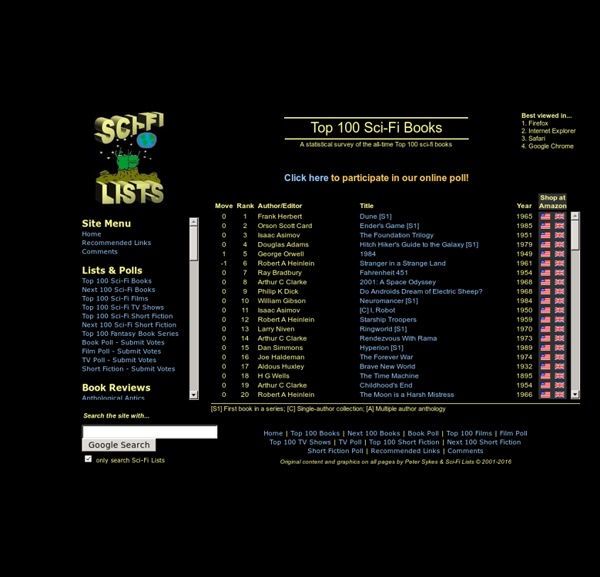 Your Picks: Top 100 Science-Fiction, Fantasy Books More than 5,000 of you nominated. More than 60,000 of you voted. And now the results are in. The winners of NPR's Top 100 Science-Fiction and Fantasy survey are an intriguing mix of classic and contemporary titles. 50 Fictional Days Immortalized in Literature Today is April 4th, the day on which George Orwell’s 1984 famously begins—in the year 1984, of course (a year that seems rather closer than usual right now). Inspired by this literary holiday of sorts, I went out in search of other notable fictional dates—that is, specific days on which something interesting happens in literature (as opposed to actual events that are reported in novels, as background or otherwise). I’m sure there are an infinite number of these out there, but there are also an infinite number of books in which the author never pins down the events at all, rather letting them float in the reader’s imagination—an approach that certainly has its merits. But if you are an obsessive planner and list-maker (like certain people, not me, not me at all), you enjoy knowing exactly what has happened, and what will happen, and when—even if said events are made up. January 1, almost every year — Aaliya begins a new translation, An Unnecessary Woman, Rabih Alameddine

A World Without People - In Focus For a number of reasons, natural and human, people have recently evacuated or otherwise abandoned a number of places around the world -- large and small, old and new. Gathering images of deserted areas into a single photo essay, one can get a sense of what the world might look like if humans were to vanish from the planet altogether. Collected here are recent scenes from nuclear-exclusion zones, blighted urban neighborhoods, towns where residents left to escape violence, unsold developments built during the real estate boom, ghost towns, and more. [41 photos] Use j/k keys or ←/→ to navigate Choose: A tree grows from the top of a chimney in an abandoned factory yard in Luque, on the outskirts of Asuncion, Paraguay, on October 2 , 2011. Imaginary Friends by Terry Brooks, Speakman Press Good, but not up to usual standards of Terry Brook's work This story is the basis of one of Terry Brook's most memorable characters that has always stuck with me since I first met him. The story starts out well but seems to have been finished in a hurry. Fortunately, this concept was later expanded upon and became a major plot in a later book. I would still recommend purchasing this title as it demonstrates a writer in progress and more importantly as its purchase raises money for someone in need

In the Land of the Non-Reader A few months ago, I stopped reading books. At night I crawl into bed and thumb my iPhone to life. I watch Star Trek: Voyager on the Netflix app. It’s not a bad show. But somehow it is difficult to compare the weeks it took to complete the seven-season voyage through the Delta Quadrant with Capt. Janeway and the weeks I spent reading my favorite books — thick books by Eliot, Laxness, Dickens, and Pamuk. 10 Great Post-Apocalyptic Science Fiction Novels Books It’s a classic theme of science fiction: something really, really bad happens, and mankind is knocked back to the Stone Age. Of course, with the dropping of atomic bombs by the U.S. to end World War II, people came to realize that for the first time Man himself possessed the power to bring about a global cataclysm. And science fiction wasted no time in examining the possible effects (there were speculative stories in print well before the Manhattan Project was even conceived). But nuclear holocaust isn’t the only way Man’s thin veneer of civilization can be stripped by catastrophe.

National Geographic Photo Contest 2011 - Alan Taylor - In Focus National Geographic is currently holding its annual photo contest, with the deadline for submissions coming up on November 30. For the past nine weeks, the society has been gathering and presenting galleries of submissions, encouraging readers to vote for them as well. National Geographic was kind enough to let me choose among its entries from 2011 for display here on In Focus. Gathered below are 45 images from the three categories of People, Places, and Nature, with captions written by the individual photographers. [45 photos] Use j/k keys or ←/→ to navigate Choose: Many people pilgrimage to Uluru, but what is seen there often depends on where you've come from. What I Learned from Harry Potter Harry Potter has been a part of my life since I was in high school. I've read the books, seen the movies too many times to count and my daughter is a huge fan. It's become part of who I am. I was sad to see it end.

So many great books, and never enough time! by scotthiga Mar 24

Thanks man, only just starting to dent this number by aldeane Mar 19