ChalkedUp comments on All doctors must carry a staff. The staff must be hand-carved from a local wood by the doctor, and for every patient a doctor can't treat, they lose an inch of their staff. When the staff is gone, so is their license. Seoul_Doctor comments on Kim Jong Un orders North Korea military to prepare for war (from Friday at 5 PM) Schaftenheimen comments on What is even happening in Syria right now? JesterJayJoker comments on TIL in 1975 a county clerk in Colorado issued a same-sex marriage license, finding no law that forbade it. When a man came to her office to marry his horse in protest, she determined the 8-year-old horse was too young to get mar.

TheSchnozzberry comments on You're a refugee, Harry! Is Math an inherent quality of the Universe or is it just a logical exercise conceptualized by Humans? : askphilosophy. The Real Reason Studios Want Die-Hard Fans Steering Movie Adaptations. M0dusPwnens comments on What is the best "the bad guy won" ending? Ocathasaigh comments on What mid-twenties feels like. Kahmahniwannaleia comments on What's the most messed up thing you've done in a video game?

Lamfada comments on My dad told me he was being "stalked by a sinister looking cow". I didn't believe it until he sent me this photo... Simon Pegg Worries The Love Of Science Fiction Is Making Us "Childish" An Artificial Intelligence Is Being Taught To Simulate Anger. Southofneutral comments on If you had 365 days to eat a standard wooden door, how would you go about it? Akustyx comments on Pick a restaurant. Visit it daily for years, and stick to a routine of always ordering scrambled eggs for breakfast. Then order poached eggs one day, scream "oh my god what is this" when it arrives, then run out and die in traffic, thu. I believe the government should be allowed to view my e-mails, tap my phone calls, and view my web history for national security concerns. CMV : changemyview. SuddenlySnowden comments on We are Edward Snowden, Laura Poitras and Glenn Greenwald from the Oscar-winning documentary CITIZENFOUR. AUAA. This is a good question, and there are some good traditional answers here. 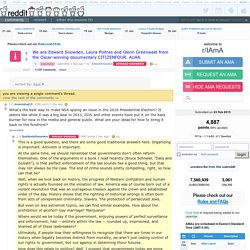 Organizing is important. Activism is important. At the same time, we should remember that governments don't often reform themselves. One of the arguments in a book I read recently (Bruce Schneier, "Data and Goliath"), is that perfect enforcement of the law sounds like a good thing, but that may not always be the case. The end of crime sounds pretty compelling, right, so how can that be? Well, when we look back on history, the progress of Western civilization and human rights is actually founded on the violation of law. But even on less extremist topics, we can find similar examples. Where would we be today if the government, enjoying powers of perfect surveillance and enforcement, had -- entirely within the law -- rounded up, imprisoned, and shamed all of these lawbreakers? Mopecore comments on Last Week Tonight with John Oliver: Drones (HBO)

How do you as a people walk around head held high, knowing that every few months you are committing a 9/11 event to other people. 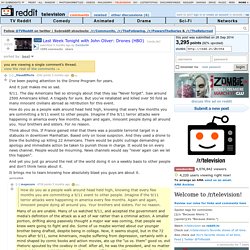 Imagine if the 9/11 terror attacks were happening in america every few months. Again and again, innocent people dying all around you. Your brothers and sisters. For no reason. Many of us are unable. Some of us, therefore, left our dorm rooms, and walked down Main Street to the recruiter's office. Some of us got enlisted, then, and went down to Georgia, head high to mask the anxiety and fear they might have helped. So they persevere. They learn to kill. Slate Star Scratchpad — Some thoughts on the recent discussion of HPMOR... [115] Speaking for the Dead : HPMOR. LuckisaFormula comments on The new White and Gold Power Rangers. Jcooper1321 comments on Burial pods.

Bcgoss comments on A modern Rockwell painting. Diabolico comments on "Magic" was widely acknowledged in the old world. Is there any evidence or record of such magic being used in a public, verifiable setting at any point in history? Why did so many people buy into this idea? Barassmonkey17 comments on What is the most sudden/unexpected character death in a film or TV show? Vengeful Doe Attacks Old Man After He Shoots Her. These Fan-Made Suicide Squad Trailers Are So, So Good. Superman Batman is going to be well made , visually stunning and absolutely predictable. 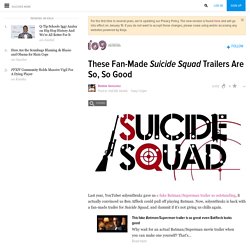 /u/An_undeniable_truth explains exactly why McDonalds employee turnover rate is so high : bestof. Should You Be Worried About Ebola? A Helpful Chart. Namtara comments on Who is the most misunderstood character in all of fiction? Morganmarz comments on so pure. Tommy2255 comments on [S4E8] When will we learn? Hibbel comments on Man cooked to death in scalding shower as punishment by prison guards. Rynvndrp comments on Reddit, can you blow my mind in one sentence? UnnaturalHeuristic comments on Grown-Ups of Reddit, What is the most embarrassing thing that you should be able to do, but can't?

Enjo13 comments on Another moment of real clarity in the fiscal debate "Obama manages to demonstrate once again that there is literally nothing he could offer Republicans. Why is it so hard to make friends as an adult? : AskReddit. Who's your favorite character that risked everything for love? GOD_Over_Djinn comments on New spin on an old question: Is the university economics curriculum too far removed from economic concerns of the real world? What Was the Most Life-Changing Invention of the Last Century? SExpand Standardized Shipping Containers There are many more inventions that should make the list, but I'll add this one because people don't think about how this invention allowed the world to shrink as much as the telephone or airplane did. 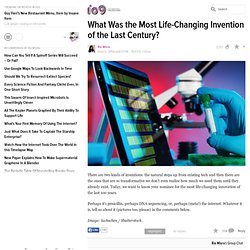 Until these, dockworkers unloaded ships by hand (see On the Waterfront for example), which was prohibitively expensive to import en mass. So if you could make it here, we usually did, and anything from overseas was costly. Now we make everything wherever the labor is cheapest, of course this has led to so serious growing pains, but all world changing inventions... well change the world. Mass of ants behaving as a fluid. A "floating" table made of magnetic cubes. DepthHub: A jumping-off point for deeply-involved subreddits. Joegee66 comments on What do you consider to be a 'victimless crime'? The_Old_Gentleman comments on Anarcho-"Capitalism," as described by a mutualist's comment in /r/anarcho-capitalism. Thoughts? First RoboCop trailer shows off Robocop's brand new look. Full disclosure: i'm neither in support of this movie or against it. i think it's the right choice not to do the satire angle again. it was done, expertly, already. trying to do it again would invite even more derision than just remaking it. instead, jose padhilla has said he's more interested in the real-world consequences of a technological feat like this. he's stated that this version of robocop deals with what the original only gave a few scenes: murphy coming to grips with his humanity (or loss thereof). meanwhile, it also addresses the use of drones on civilian populations, etc., which is reasonably topical and interesting. also, new robocop looks like a shiny, black iron man. meh. 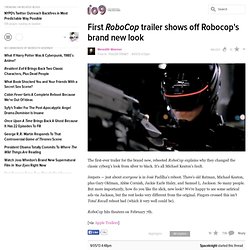 "i think it's the right choice not to do the satire angle again. it was done, expertly, already. trying to do it again would invite even more derision than just remaking it. " Which pretty much summarizes why this movie shouldn't have been remade. Some of that seems to be there. What could this baffling new trailer from J.J. Abrams possibly mean? Is this really a big issue? 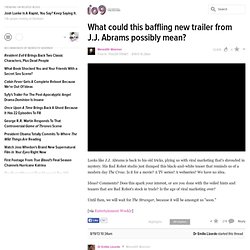 In an age of watching every casting call and budget spike in every production (and reporting them all on here, AV Club, Slashfilm, etc, as news items), is it so terrible that one guy wants to keep an element of mystery or surprise in his projects? This is really just a classic teaser trailer. It doesn't feel like it's trying to be an Event ("event" and forced-viral-marketing, that's something different; I'm not as keen to defend "event" marketing), it's just trying to whet your appetite.

It's too bad there's not a title attached (unless the title is The Stranger, in which case there you go), but again, in this media-saturated world, if a title were attached there'd be zero mystique right away. I think Abrams tries too hard, I'll concede that, definitely... but why are we so quick to spew bile at someone for wanting to try to get us excited at all? The truth is, if I was in JJ Abrams's position, I'd probably be doing this exact thing.