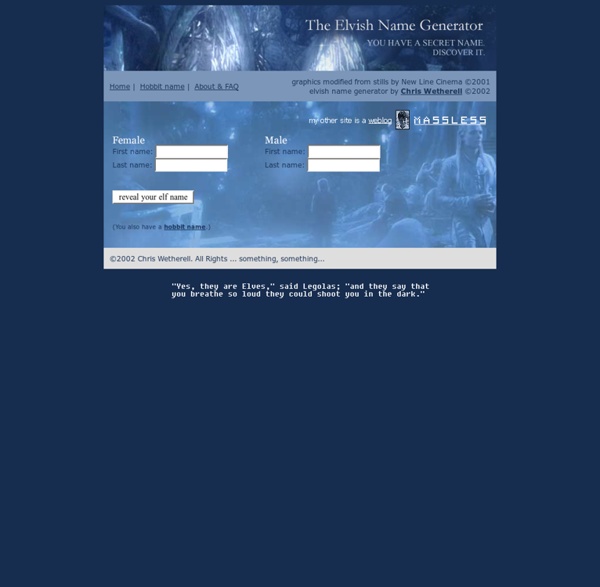 The Lord of the Rings by JRR Tolkien reviewed on Fantasy Book Review Reader reviews Have Your Say Andrew Luck from USA What I Learned from Harry Potter Harry Potter has been a part of my life since I was in high school. I've read the books, seen the movies too many times to count and my daughter is a huge fan. It's become part of who I am. I was sad to see it end. I cried at the beginning of the movie. I cried at the end of the movie.

Four Homemade Cleaners This was easier than I thought it would be. One of Betsy’s goals for the year was to ditch some of our standard cleaners that we use around the house and make them! Honestly, I was a bit skeptical about this project mainly because I wasn’t sure that homemade cleaners would really get the job done. And my lovely wife is a bit of a neat freak so there’s no way she would use something that didn’t perform well. J. R. R. Tolkien John Ronald Reuel Tolkien, CBE (/ˈtɒlkiːn/ TOL-keen;[a] 3 January 1892 – 2 September 1973) was an English writer, poet, philologist, and university professor, best known as the author of the classic high fantasy works The Hobbit, The Lord of the Rings, and The Silmarillion. He served as the Rawlinson and Bosworth Professor of Anglo-Saxon and Fellow of Pembroke College, Oxford, from 1925 to 1945 and Merton Professor of English Language and Literature and Fellow of Merton College, Oxford from 1945 to 1959.[1] He was at one time a close friend of C. S. Lewis—they were both members of the informal literary discussion group known as the Inklings. Tolkien was appointed a Commander of the Order of the British Empire by Queen Elizabeth II on 28 March 1972. In 2008, The Times ranked him sixth on a list of "The 50 greatest British writers since 1945".[7] Forbes ranked him the 5th top-earning "dead celebrity" in 2009.[8]

The Very Secret Diaries Welcome! Here you may find the brilliant "Very Secret Diary" series by the wonderful Cassandra Claire. These are also published in her LiveJournal, but she was kind enough to agree to let your humble servant here publish them here. Enjoy! 4 Amazing Underground Dwellings! Get closer to nature by living in an underground home built from sustainable materials I’ve always wanted to live in an underground dwelling because it’s the closest I’ll ever get to living like a Hobbit, and it seems like the perfect place to go in case zombies attack. Most importantly, underground homes are very eco-friendly and are built directly into the earth, which means they take up less construction material and produce less waste. Rohan Rohan was the territory of the Rohirrim, a people of herdsmen and farmers on the northern borders of Gondor in Middle-earth. Well-known for their horses and cavalry, they were Gondor's most important ally. [edit] Background

Writing With Elvish Fonts This is a tutorial for some of the fonts and tools that can be used for writing in Tengwar on a Windows PC. Contents Direct links to some notes in the text: "About installing fonts"; "A frequently asked question about TengScribe"; "A possible problem with Windows 2000 and XP".