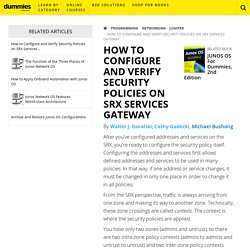 From the SRX perspective, traffic is always arriving from one zone and making its way to another zone. You have only two zones (admins and untrust), so there are two intra-zone policy contexts (admins to admins and untrust to untrust) and two inter-zone policy contexts (admins to untrust and untrust to admins). Configure security policies First, you want to give traffic originating on the admins zone permission to pass to the untrust zone: Realistically, the policy will probably count the packets and log the session initiations and closes between the zones.

Verify the policies. Automation. How to Apply Onboard Automation with Junos OS - dummies. By Walter J. 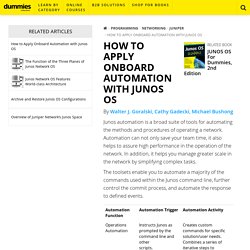 Goralski, Cathy Gadecki, Michael Bushong Junos automation is a broad suite of tools for automating the methods and procedures of operating a network. Automation can not only save your team time, it also helps to assure high performance in the operation of the network. In addition, it helps you manage greater scale in the network by simplifying complex tasks. The toolsets enable you to automate a majority of the commands used within the Junos command line, further control the commit process, and automate the response to defined events. The Juniper website offers a wealth of resources and tools that you can use to get started with Junos automation, including a library of templates to customize and run on your device.

Be sure to look for the “Day One” series on Junos automation to learn more about automating the methods and procedures of your network. Then head over to the Junos Automation community page to find experts who share the latest tips and can answer your questions. How to Configure SRX Security Zones with Junos - dummies. By Walter J. 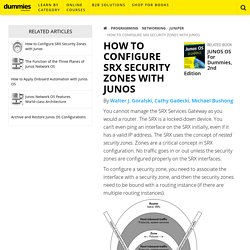 Goralski, Cathy Gadecki, Michael Bushong You cannot manage the SRX Services Gateway as you would a router. The SRX is a locked-down device. You can’t even ping an interface on the SRX initially, even if it has a valid IP address. The SRX uses the concept of nested security zones. To configure a security zone, you need to associate the interface with a security zone, and then the security zones need to be bound with a routing instance (if there are multiple routing instances). It sounds complicated, but it’s not. Juniper - dummies. How to Check Junos Configuration before Commit - dummies. By Walter J. 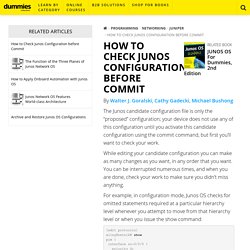 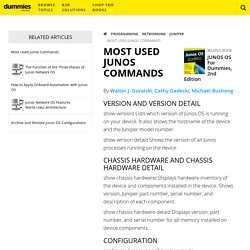 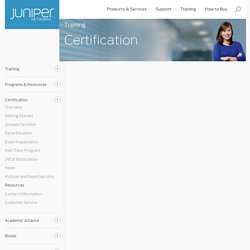 How to Configure Interfaces on Junos Devices - dummies. By Walter J. 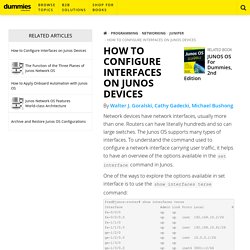 Goralski, Cathy Gadecki, Michael Bushong Network devices have network interfaces, usually more than one. Getting Started with Juniper Networks. Tech Talk - Networking. My meager attempt to share some tips and tricks and other niceties picked up along the way. 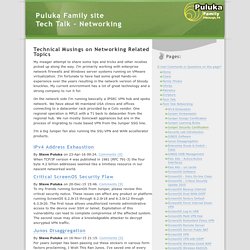 I'm primarily working with enterprise network firewalls and Windows server systems running on VMware virtualization. I'm fortunate to have had some great hands-on experience over the years resulting in the network version of bloody knuckles. My current environment has a lot of great technology and a strong company to run it for. On the network side I'm running basically a IPSEC VPN hub and spoke network. IT Workbooks Everything Center Share Knowledge. Tech Commands for Juniper JunOS Troubleshooting. 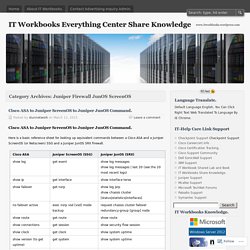 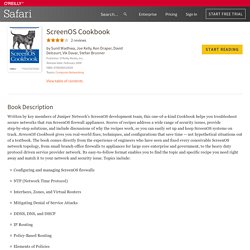 Scores of recipes address a wide range of security issues, provide step-by-step solutions, and include discussions of why the recipes work, so you can easily set up and keep ScreenOS systems on track. ScreenOS Cookbook gives you real-world fixes, techniques, and configurations that save time -- not hypothetical situations out of a textbook. The book comes directly from the experience of engineers who have seen and fixed every conceivable ScreenOS network topology, from small branch office firewalls to appliances for large core enterprise and government, to the heavy duty protocol driven service provider network.