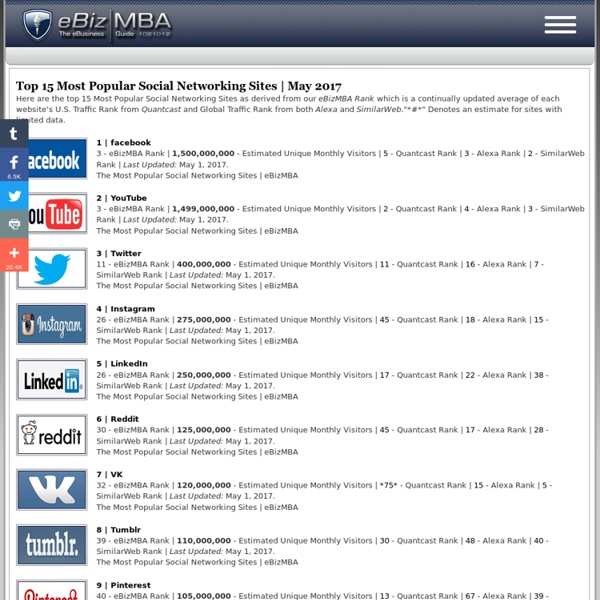 Top 10 Best Flash Websites of 2012 Here are our editor's picks for the Top 10 Best Flash Websites of 2017 based on visual artistry, integrated sound, ease of use, and uniqueness. 1 | Pharrell Williams - Happy Pharrell Williams has employed Flash and his creative style to create the world's first 24 hour music video. More importantly he uses the full complement of Flash media integration to create a web experience that fully conveys the song's theme in a way that a traditional video could not. 2 | Clouds Over Cuba This interactive multimedia documentary uses the immersive nature of Flash to allow the audience to relive the Cuban Missile Crisis 50 years later and discover what might have been. Produced by the JFK Library this chilling website entertains and teaches. The mobile synching and dossier are a great touch.

Multi Platform Social Media – diagram-by-diagram Over the years I have been creating lots of confusing, busy yet at the same time, meaningful and insightful emergent media diagrams. These attempt to help the uninitiated heritage media folk, get to grips with a multiplatform, shifting-social-media-sands, transmogodified entertainment landscape…breathe. So I have been uploading a bunch of these diagrams onto my flickr account over the past weeks, partly to make them more accessible to me too (oh the joys of the cloud) but with the creative commons tag, for all and sundry to use (attributed of course – the only way to power & fame nowadays – cackles!). Here is a short selection of the 25 or so already up, with brief descriptions – the main bunch is in a set called ‘Emergent Media’ here. The above diagram is intended to help storytellers simply understand a range of key places to distribute their story fragments or triggers online. The above is one of my favourite diagrams from way back in early 2006.

Make Your Own DIY Calendar From a Recycled CD Case Ring in the new year with this fun and easy DIY calendar. This project is a double win: you get to clean out all your old magazines and scrap papers while making the perfect end-of-the-year gift for your calendar-loving friends. Who doesn't love a good calendar? What you'll need: 18 x 24 inch piece of paper (or what's lying around) Scissors Markers Glue stick Ruler Collage scraps/magazines An old CD case Cut 13 pieces of paper to fit CD case (around 4.5 x 5.5 inches each)

Infographic: The Pros & Cons Of Social Media Tools In The Classroom With technology, or the forces of educational production, moving faster than the social relations of production can keep up with, a great graphic from Wired Magazine online shows how social media is being used in classrooms. John Hopkins, Harvard University, Stanford University, UC Berkeley, Ohio State, Columbia University and many more are now moving into the online world offering classes with over 150,000 students. They have adopted the business plan developed by the University of Phoenix and 13 of the other for-profit college cartels. This now means that the days of for-profit universities are numbered as they now no longer can compete with the internal privatization of education adopted by more and more higher education institutions using technology as the means to remove teachers and turn students over to robots and machines. As a teacher who taught online at a community college for ten or more years, I can testify to both the pros and the cons of technology use with students.

Top 10 Best HTML5 Websites of 2012 Here are our editor's picks for the Top 10 Best HTML5 Websites of 2016 based on visual artistry, integrated sound, ease of use, and uniqueness. 1 | The Wilderness Downtown The Wilderness Downtown is an interactive music video for Arcade Fire's song ''We Used to Wait''. Visitors are asked to input the address of the home they grew up in and then the site uses Google Earth and HTML5 to create a personalized music video that takes the user on a journey back home. 2 | Heart of The Artic Heart of The Arctic takes users on an Arctic expedition/scavenger hunt through four distinct environments designed to show users the steps that would be needed to restore climate balance to the arctic region. This site perfectly showcases how Html5 can be used to create fun and educational websites. 3 | Three Dreams of Black 3 Dreams of Black uses HTML5 to promote Danger Mouse and Daniele Luppi's album Rome.

Women Win Facebook, Twitter, Zynga; Men Get LinkedIn, Reddit [INFOGRAPHIC] When it comes to the sexes on social media, there are a few places where the battle lines seem settled. It probably won't surprise you to learn, for example, that men are from Google+ and women are from Pinterest. But when it comes to the two dominant social networks — Facebook and Twitter — you may be shocked to discover that women are now in the majority on both services. Not only that, but they're posting far more frequently on Facebook than their slowpoke male counterparts can manage.

Schools and Online Social Networking By Nancy Willard Most educators working with middle and high school students are aware of the explosive involvement of youth on social networking sites. Few are prepared to deal with it. Why does information flow in networks? People like Barry Wellman and Caroline Haythornthwaite have contributed significantly to advancing the analysis of the impact of networks on society. Well before Barabasi, Watts, and Strogatz arrived on the network scene, sociologists (and social psychologists) such as Granovetter, Wellman, and Milgram were developing models to understand how people connect. As a result of this work, terms like “six degrees” and “strong/weak ties” and “networked communities” have become mainstream. With an understanding of how people are connected we can also gain insight into how information flows through a network. I’m sure you’ve seen analysis of the social networks of board of directors at different companies. Valdis Krebs addresses this in Overlapping Networks:

Pros and Cons of Social Media in the Classroom Social Media | Feature Page 2 of 2 Pros and Cons of Social Media in the Classroom Organizing Your Social Media Strategy By Social media has made a tremendous impact on your business and now you need to come up with ways that you can improve your strategy to make social media even more effective for you. A checklist can help tremendously. 9 New Social Networking Sites That Could Change the Game In case you haven’t heard, the Facebook was recently the first social network to break the 1,000,000,000 users mark. That’s 1 billion…with a “B.” While Facebook in undoubtedly the king of social networking as we know it, over the past 2 years we’ve seen a plethora of new social networking sites jump on the scene. The Era of Niche Social Networks Over the years Facebook has evolved into a photo sharing and life streaming platform good for base online communication between friends and family. However the social networking giant’s biggest flaw is that it actually appeals to 1 billion people.

Teaching Toddlers to Tweet? Introducing Social Media to Elementary Students Let me begin this post by saying, "I agree." I agree that students should have recess and play outside. I agree that young children need to interact in a face-to-face setting. I agree that it is developmentally critical to engage with paper, paint, blocks, crayons and even the dirt on the ground, because elementary students need to experience the physical world.