How to Bring Colour to Your Acting Performance - Casting Networks Blog. Over the years, I have heard many directors, teachers, and casting directors instruct actors to ‘bring more colour’ to their performances in auditions and on screen. 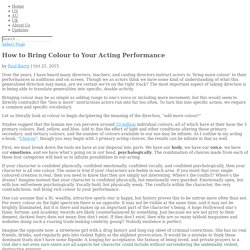 Though we as actors think we have some kind of understanding of what this generalised direction may mean, are we certain we’re on the right track? The most important aspect of taking direction is in being able to translate generalities into specific, doable activity. Bringing colour may be as simple as adding range to one’s voice or including more movement, but this would seem to directly contradict the “less is more” instructions actors run into far too often. To turn this into specific action, we require a common and specific vocabulary. Let us literally look at colour to begin deciphering the meaning of the direction, “add more colour!” Studies suggest that the human eye can perceive around 10 million individual colours, all of which have at their base the 3 primary colours. Comments comments. How to Be Awesome In the Audition Room - Casting Networks Blog.

Oh, those feelings we have when we head forth into The Room: the pressure, the anxiety, the nerves! 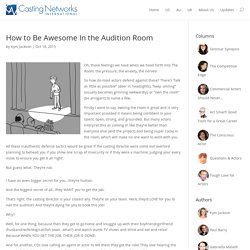 So how do most actors defend against these? There’s “talk as little as possible” (deer in headlights), “keep smiling” (usually becomes grinning awkwardly), or “own the room” (be arrogant) to name a few. Firstly I want to say, owning the room is great and is very important provided it means being confident in your talent, open, strong, and grounded. But many actors interpret this as coming in like they’re better than everyone else (and the project) and being super cocky in the room, which will make no one want to work with you.

All these inauthentic defense tactics would be great if the casting director were some evil overlord planning to behead you if you show one scrap of insecurity or if they were a machine, judging your every move to ensure you get it all ‘right’. The Networker Blog» Blog Archive » Rebel Without A Car. By Enci Turn Your Time Into Dollars “We define others not by what they have but by what they lack. 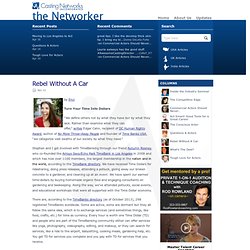 Rather than examine what they can offer,” writes Edgar Cahn, recipient of DC Human Rights Award, author of No More Throw-Away People and founder of Time Banks USA, “we categorize vast swaths of our society by what they need.” Stephen and I got involved with TimeBanking through our friend Autumn Rooney, who co-founded the Arroyo Seco/Echo Park TimeBank in Los Angeles in 2008 and which has now over 1100 members, the largest membership in the nation and in the world, according to the TimeBank directory.

We have received Time Dollars for ridesharing, doing press releases, attending a potluck, giving away our broken concrete to a gardener, and cleaning up at an event. There are, according to the TimeBanks directory (as of October 2013), 298 registered TimeBanks worldwide. The Networker Blog» Blog Archive » Act Smart! Good Tools for a Great Career. By Colleen Wainwright | The Communicatrix 7 better ways to end your day The day you’re waking up to has its roots in last night. 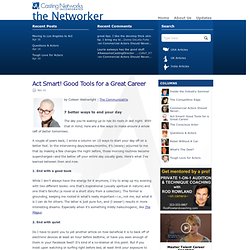 With that in mind, here are a few ways to make ensure a whole raft of better tomorrows. A couple of years back, I wrote a column on 10 ways to start your day off on a better foot. In the intervening days/weeks/months, it’s (slowly) occurred to me that by making a few changes the night before, those morning routines become supercharged—and the better off your entire day usually goes. The Networker Blog» Blog Archive » Commercial Actors Should Never… By Casting Director, Laurie Records I believe whenever possible, a casting director puts great care and consideration into building a project, otherwise known as a breakdown. 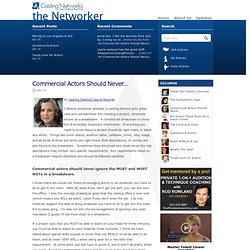 A commercial breakdown is chock full of incredibly important information. Casting Frontier ™ Blog. The Networker - Casting Networks Monthly Newsletter. By Bonnie Katz, MA Looking For Love In All The Wrong Places Ah, February, the month that sends most people into a tizzy, especially actors. 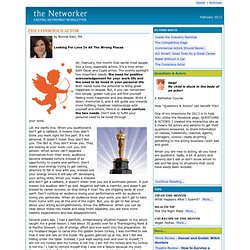 The Networker - Casting Networks Monthly Newsletter. By colleen wainwright | the communicatrix Ten Habits of Successful Artists (The Icarus Deception, Part 2) True—and truly successful—artists don't limit themselves to the "how-to"s of their own discipline; they steal from the best of everything. 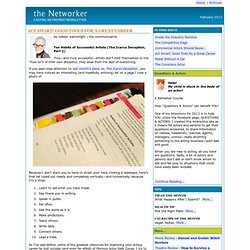 If you paid close attention to last month's piece on The Icarus Deception, you may have noticed an interesting (and hopefully, enticing) list on a page I took a photo of: Because I don't want you to have to strain your neck cricking it sideways, here's that list typed out neatly and completely vertically—and numerically, because I'm a Virgo: Learn to sell what you have made. As I've said before, some of the greatest resources for improving your acting career lie just outside (and even far afield) of Obvious Actor-Safe Zones. The Networker - Casting Networks Monthly Newsletter. The Networker - Casting Networks Monthly Newsletter. By colleen wainwright | the communicatrix Act Smart! 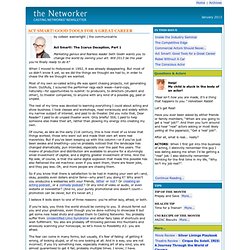 : The Icarus Deception, Part 1 Marketing genius and fearless leader Seth Godin wants you to change the world by owning your art. Will 2013 be the year you're finally ready to do it? When I moved to Hollywood in 1992, it was already disappearing. Most of my own so-called acting life was spent chasing projects, not generating them. The rest of my time was devoted to learning everything I could about acting and show business. Of course, as late as the early 21st century, this is how most of us knew that things worked; those who went out and made their own art were real mavericks. The Networker - Casting Networks Monthly Newsletter. 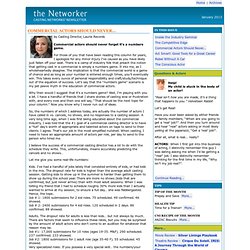 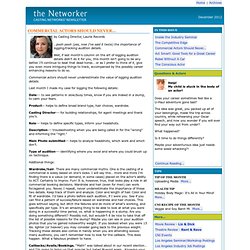 A Fresh Face for Casting Calls? The ever-youthful Goldie Hawn has been working in the entertainment industry for forty-five years and recently celebrated her 67th birthday! She started her career as the zany airhead on Rowan and Martin’s Laugh In and won an Academy Award for Best Supporting Actress as Walter Matthau’s suicidal fiancée in 1968’s Cactus Flower. Hawn is featured on the cover of this month’s Prevention Magazine as a star who defies the laws of age and aging. Indeed, she seems to defy the laws of gravity itself. The Networker - Casting Networks Monthly Newsletter. The Networker - Casting Networks Monthly Newsletter. By Casting Director, Terry Berland Happy New Year. Here’s to a fabulous year of auditioning and opportunities. What is the relationship between the Casting Director and session director? What impresses Casting Directors and session directors about actors?

As a Casting Director, we receive direction from our director and we then communicate that to our session director.