NGOs must form creative alliances to tackle global poverty and injustice. Why work with others? 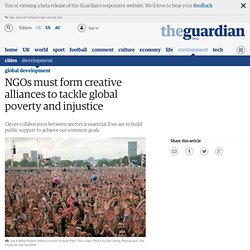 Life is a lot more straightforward when you don't. But no NGO can succeed in isolation. Oxfam's charitable mission is to end poverty and injustice. We're not the only ones. We all have a responsibility to work together where it accelerates progress towards goals we share. In developed countries, that means collaborating to influence the actions of our governments and to deepen public support for those efforts. How good are we at this today? But of course we can and must collaborate far more broadly. But too often our co-operation is limited to our traditional allies, and by the perception of different interests which would require sustained dialogue to resolve.

At the same time, new modes of organisation and shifts in public attitudes are diminishing the impact of even diverse alliances between traditional NGOs. NGO Networks: building capacity. New charities rely on peers for support. A Charity Commission survey reveals that charities seeking to register with it use other charities as a source of support almost as much as the sector regulator itself. 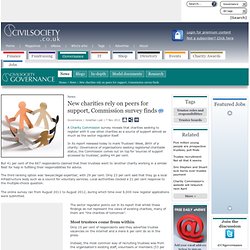 In its report released today to mark Trustees' Week, Birth of a charity: Governance of organisations seeking registered charitable status, the Commission comes out on top for ‘sources of support accessed by trustees’, polling 44 per cent. But 41 per cent of the 667 respondents claimed that their trustees went to ‘another charity working in a similar field’ for help in fulfilling their responsibilities for advice. The third ranking option was ‘lawyer/legal expertise’, with 29 per cent. Only 23 per cent said that they go a local infrastructure body such as a council for voluntary services. Local authorities clocked a 21 per cent response to the multiple-choice question. The online survey ran from August 2011 to August 2012, during which time over 6,000 new register applications were submitted. Most trustees come from within. NGO networks - Strength in numbers? Becoming a Networked Nonprofit. 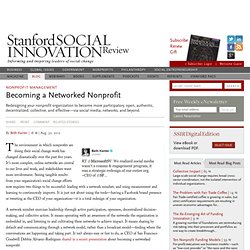 The environment in which nonprofits are doing their social change work has changed dramatically over the past five years. It’s more complex, online networks are central to our lives and work, and stakeholders want more involvement. Seeing tangible results from your organization’s social change efforts now requires two things to be successful: leading with a network mindset, and using measurement and learning to continuously improve. It is just not about using the tools—having a Facebook brand presence or tweeting as the CEO of your organization—it is a total redesign of your organization. Global Action Networks. Global Action Networks (GANs) are a specific type of network. 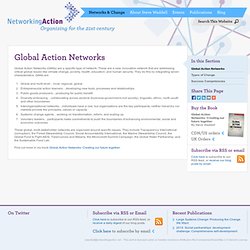 These are a new, innovative network that are addressing critical global issues like climate change, poverty, health, education, and human security. They do this by integrating seven characteristics. GANs are: Global and multi-level…local, regional, globalEntrepreneurial action learners…developing new tools, processes and relationshipsPublic goods producers…producing for public benefitDiversity-embracing…collaborating across sectoral (business-government-civil society), linguistic, ethnic, north-south and other boundariesInterorganizational networks…individuals have a role, but organizations are the key participants; neither hierarchy nor markets provide the principles, values or capacitySystemic change agents…working on transformation, reform, and scaling upVoluntary leaders…participants make commitments to push the boundaries of enhancing environmental, social and economic outcomes. Global solution networks for the 21st century. There is a fundamental change underway regarding how global problems can be solved and perhaps how we govern ourselves. 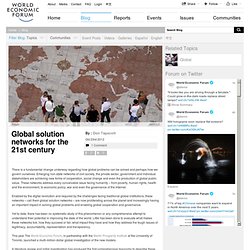 Emerging non-state networks of civil society, the private sector, government and individual stakeholders are achieving new forms of cooperation, social change and even the production of global public value. These networks address every conceivable issue facing humanity – from poverty, human rights, health and the environment, to economic policy, war and even the governance of the Internet.

Enabled by the digital revolution and required by the challenges facing traditional global institutions, these networks – call them global solution networks – are now proliferating across the planet and increasingly having an important impact in solving global problems and enabling global cooperation and governance. Yet to date, there has been no systematic study of this phenomenon or any comprehensive attempt to understand their potential in improving the state of the world. 1. 2. 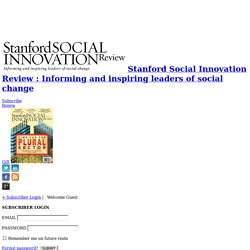 Organizations around the world have begun to see collective impact as a new and more effective process for social change. They have grasped the difference our past articles emphasized between the isolated impact of working for change through a single organization versus a highly structured cross-sector coalition.1 Yet, even as practitioners work toward the five conditions of collective impact we described earlier, many participants are becoming frustrated in their efforts to move the needle on their chosen issues. (See “The Five Conditions of Collective Impact,” below.) Global Action Networks. Catalysing networks for Social Change. Civicus: New social contract. Working "Wikily" Working Wikily Presentation. NGO Learning.

Why You Need Dóchas.