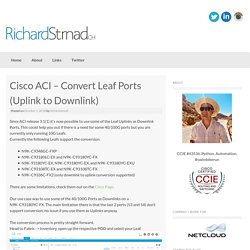 This could help you out if there is a need for some 40/100G ports but you are currently only running 10G Leafs. Currently the following Leafs support the conversion: CLI Commands Used to Troubleshoot ACI Fabric from the APIC Controller. Introduction This document describes commands that can than can entered on the APIC controller by the "admin" user. 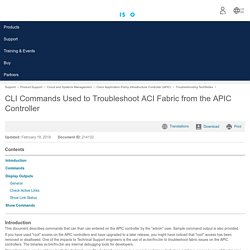 Sample command output is also provided. If you have used "root" access on the APIC controllers and have upgraded to a later release, you might have noticed that "root" access has been removed or disallowed. One of the impacts to Technical Support engineers is the use of av.bin/fnv.bin to troubleshoot fabric issues on the APIC controllers. The binaries av.bin/fnv.bin are internal debugging tools for developers. This information can be obtained with the "admin" user. Note: Some of the commands in this document might be deprecated in later releases. Commands This list contains some helpful commands that can be entered in the CLI of the APIC controller and can be executed by the "admin" user. 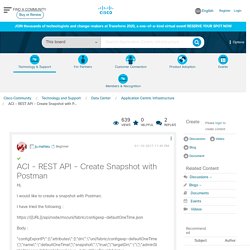 I have tried the following : Body : Unfortunately, I have the error code : Operating Cisco ACI the Right Way « ipSpace.net blog. This is a guest blog post by Andrea Dainese, senior network and security architect, and author of UNetLab (now EVE-NG) and Route Reflector Labs. 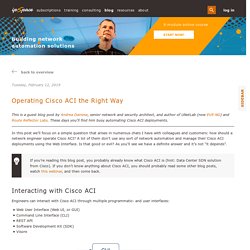 These days you’ll find him busy automating Cisco ACI deployments. In this post we’ll focus on a simple question that arises in numerous chats I have with colleagues and customers: how should a network engineer operate Cisco ACI? A lot of them don’t use any sort of network automation and manage their Cisco ACI deployments using the Web Interface. - Page 6 of 7 - One of my former colleagues wrote a great series of posts in which he explains ACI, from start to beginning. 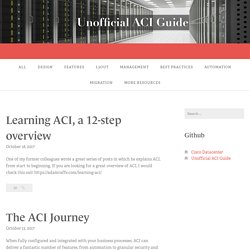 If you are looking for a great overview of ACI, I would check this out! When fully configured and integrated with your business processes, ACI can deliver a fantastic number of features, from automation to granular security and the list goes on… Commentary – So many times, I’ve seen ACI customers who have been “sold a bill of goods” that promises all the wonderful benefits, but due to lack of … More The ACI Journey One issue that can pop up when trying to maintain an ACI Fabric is the presence of cosmetic faults that drag our health score down.

For example, let’s say we pre-configure server ports to be members of an EPG, but the servers have yet to be plugged into the fabric. In that case, the health … More Ignoring Acknowledged Faults. Learning ACI - Part 4: Application Profiles, EPGs, Contracts and Filters · Adam Raffe. 02 Jan 2015 In this post, we’ll take a closer look at some of the most important constructs within the ACI solution - application profiles, End Point Groups (EPGs), contracts and filters. 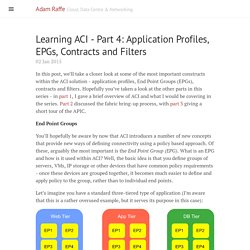 Hopefully you’ve taken a look at the other parts in this series - in part 1, I gave a brief overview of ACI and what I would be covering in the series. Part 2 discussed the fabric bring-up process, with part 3 giving a short tour of the APIC. End Point Groups You’ll hopefully be aware by now that ACI introduces a number of new concepts that provide new ways of defining connectivity using a policy based approach. Setting up Cisco ACI From Scratch. This Cisco ACI article describes the first few things you will do when getting ACI Fabric components in your datacenter. 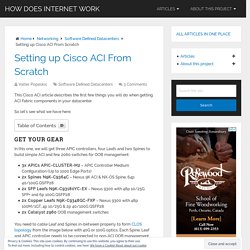 So let’s see what we have here: Get Your Gear. ACI Best Practice Configurations - The top question all new ACI customers have (or should have), is what are the configurations that should be enabled on my fabric from the beginning? 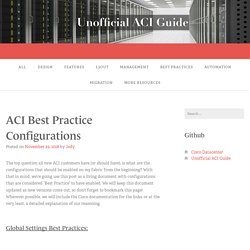 With that in mind, we’re going use this post as a living document with configurations that are considered “Best Practice” to have enabled. We will keep this document updated as new versions come out, so don’t forget to bookmark this page! Wherever possible, we will include the Cisco documentation for the links, or at the very least, a detailed explanation of our reasoning. Global Settings Best Practices: MCP (per Vlan) should be enabled – MisCabling Protocol (or MCP) detects loops from external sources (i.e., misbehaving servers, external networking equipment running STP) and will err-disable the interface on which ACI receives its own packet. At a high level, options 2 and 3 will prevent the mis-learning of IP endpoints on your fabric that can occur. APIC Troubleshooting Guide, Release 3.x and Earlier - Finding the Switch Inventory [Cisco Application Policy Infrastructure Controller (APIC)] Best Practice Archives - Configuring Out-of-Band Management Connectivity in ACI – How to ACI.

ACI: Using Postman Runner with .csv files - In this post we will see how to use Postman Runner in order to deploy ACI configuration with variables from a CSV file. 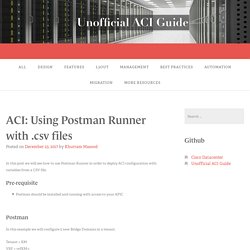 Pre-requisite Postman should be installed and running with access to your APIC Postman In this example we will configure 5 new Bridge Domains in a tenant. Tenant = KM VRF = vrfKM-1 New BD’s to be configured = BD1, BD2, BD3, BD4, and BD5 Currently the tenant KM looks like below figure. Next we will create a CSV file that must be saved in UNIX format. ‘bridge’ and ‘ip-addr’ = Postman variables (explained below) BD1,BD2, …,BD5 = are BD names to be created 10.1.1.1/24 = SVI for BD1 10.2.2.1/24 = SVI for BD2 and so on The variables ‘bridge’ and ‘ip-addr’ are user defined and we will use these variables in Postman Runner to insert more specific values when the script is run.

Make sure to save the file with extension .csv Also make sure that it is saved in UNIX format. Sample Postman scripts – ACI and Me. As requested in the comments, these are some of the Postman scripts I have used when working with ACI. 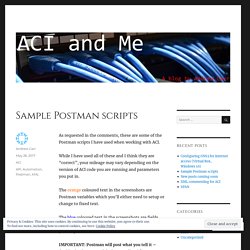 While I have used all of these and I think they are “correct”, your mileage may vary depending on the version of ACI code you are running and parameters you put in. The orange coloured text in the screenshots are Postman variables which you’ll either need to setup or change to fixed text. The blue coloured text in the screenshots are fields you will need to change to suit your environment and your requirements. LTRACI-3225. Ansible is an open source community project by RedHat and is the simplest way to automate your IT. Ansible can be used across entire IT teams, ranging from systems administrators to network administrators to developers and managers. Ansible provides an enterprise-ready, task-based, agentless architecture automation solution for not only servers and software, but also networking starting in Ansible 2.1.

Further, the Ansible backend makes extensive use of Python. Cisco is a major supported vender. Automating Cisco ACI with Ansible Eliminates Repetitive Day-to-Day Tasks - Cisco Blog. Guest blog by:Jacob McGill Network Automation Engineer Network to Code Ansible has quickly become a popular platform for network engineers to get started with network automation and eliminate repetitive day to day tasks. There have been Ansible plug-ins (in the form of modules) for Cisco IOS, NX-OS, and IOS-XR for quite some time, but only recently has support been added to Ansible for Cisco Application Centric Infrastructure (ACI).

In the latest Ansible release (version 2.4), thirty-two (32) Cisco ACI modules were added to Ansible core. This means you get this functionality as soon as you install Ansible! These modules allow you to manage ACI fabrics just like you’d manage any other device type with Ansible–through the use of resource-specific and idempotent tasks including one module that allows you to send any arbitrary JSON/XML object to the APIC. Let’s take a look and see how to get started with these modules. LTRACI-3225. LTRACI-3225.