We Need More Alternatives to Facebook - MIT Technology Review. About 10 years after TVs began to be ubiquitous in American homes, television broadcasting was a staggering financial success. 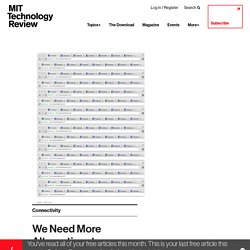 As the head of the Federal Communications Commission observed in a 1961 speech to broadcast executives, the industry’s revenue, more than $1 billion a year, was rising 9 percent annually, even in a recession. The problem, the FCC chairman told the group, was the way the business was making money: not by serving the public interest above all but by airing a lot of dumb shows and “cajoling and offending” commercials.

“When television is bad, nothing is worse,” he said. That speech would become known for the pejorative that the FCC chairman, Newton Minow, used to describe TV: he called it “a vast wasteland.” As for why it mattered, Minow told the TV executives: Your industry possesses the most powerful voice in America. Your Network’s Structure Matters More than Its Size. A recent study by Schlesinger Associates for Augure found that 75% of marketers consider finding the right influencers the most challenging aspect of an influencer marketing strategy. 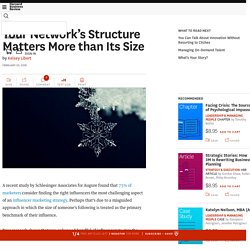 Perhaps that’s due to a misguided approach in which the size of someone’s following is treated as the primary benchmark of their influence. New research shows that you only need handful of influencers to give the impression that everyone is talking about your brand. Researchers at the University of Southern California recently uncovered the majority illusion, a paradox within social networks that makes some ideas, behaviors, or attributes appear widespread even when they are not. Since we can’t keep an eye on what the entire world is up to, we’re limited to witnessing what our social network says and does.

At times, well-connected members within our network can skew our perception of how common an idea or behavior actually is. Social Complexity. 10 Private Social Networks for Discreet Interaction. You're sick of all the mainstream social networks. 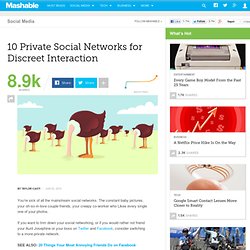 The constant baby pictures, your oh-so-in-love couple friends, your creepy co-worker who Likes every single one of your photos. If you want to trim down your social networking, or if you would rather not friend your Aunt Josephine or your boss on Twitter and Facebook, consider switching to a more private network. Rethinking The Social Network: 3 Open-Source Alternatives To Facebook. Google Launches Restricted Google+ Communities. Google today launched a new Google+ feature that further makes sure private conversations remain private. 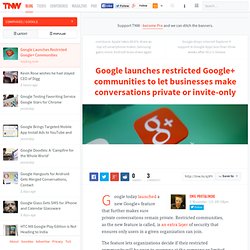 Restricted communities, as the new feature is called, is an extra layer of security that ensures only users in a given organization can join. The feature lets organizations decide if their restricted community will be open to everyone at the company or limited to just employees who receive an invitation. Google explains: “Whether it’s designs of your beta product or notes from your team off-site, anything you post will remain restricted to the organization.” Yet it goes further than administrators merely being able to set restricted communities as the default for the whole organization. Employees can also choose to create communities open to people outside of their domain, so clients, agencies, or business partners can join in the discussion.

Once a community is created, an employee can share files, videos, photos, and events from Google Drive. Dump Facebook, Keep Your Friends: A Step-By-Step Guide. Except for the holdouts, the fundamentally opposed, and those without Internet access, almost everybody can be found on Facebook today--including you. 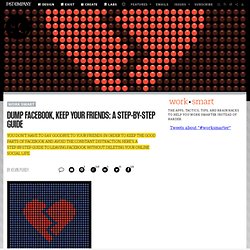 And once you’re signed up, it's hard to ever break up, because now you've got private messages, event invitations, endless new baby photos, and life-changing announcements from your closest friends all landing in that big blue inbox. It can seem downright impossible to leave, even when your Facebook relationship becomes unhealthy. Facebook Privacy Settings. Most Facebook Users Have Taken a Break From the Site, Survey Finds. Stoyan Nenov/ReutersOnly 12 percent of Facebook users said the site had become more important to them over the last year. 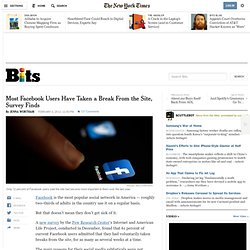 Facebook is the most popular social network in America — roughly two-thirds of adults in the country use it on a regular basis. But that doesn’t mean they don’t get sick of it. A new survey by the Pew Research Center‘s Internet and American Life Project, conducted in December, found that 61 percent of current Facebook users admitted that they had voluntarily taken breaks from the site, for as many as several weeks at a time. The main reasons for their social media sabbaticals were not having enough time to dedicate to pruning their profiles, an overall decrease in their interest in the site, and the general sentiment that Facebook was a major waste of time. About 4 percent cited privacy and security concerns as contributing to their departure. Facebook Is Using You. How Facebook Turns You Over To The Police. Facebook scans chats and posts for criminal activity. Facebook has added sleuthing to its array of data-mining capabilities, scanning your posts and chats for criminal activity. 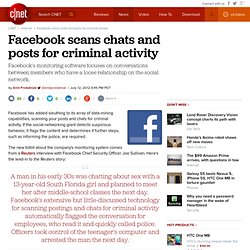 If the social-networking giant detects suspicious behavior, it flags the content and determines if further steps, such as informing the police, are required. The new tidbit about the company's monitoring system comes from a Reuters interview with Facebook Chief Security Officer Joe Sullivan. Here's the lead-in to the Reuters story: Facebook Fraud. CNN: Unlike - Why I'm leaving Facebook. I used to be able to justify using Facebook as a cost of doing business. 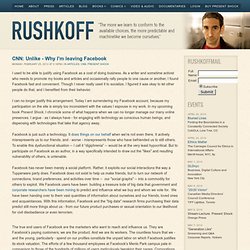 As a writer and sometime activist who needs to promote my books and articles and occasionally rally people to one cause or another, I found Facebook fast and convenient. Though I never really used it to socialize, I figured it was okay to let other people do that, and I benefited from their behavior. I can no longer justify this arrangement. Today I am surrendering my Facebook account, because my participation on the site is simply too inconsistent with the values I espouse in my work. In my upcoming book Present Shock, I chronicle some of what happens when we can no longer manage our many online presences. The Facebook Illusion. The first idea collapsed along with housing prices and the stock market in 2007 and 2008. 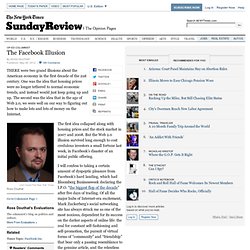 But the Web 2.0 illusion survived long enough to cost credulous investors a small fortune last week, in Facebook’s disaster of an initial public offering. I will confess to taking a certain amount of dyspeptic pleasure from Facebook’s hard landing, which had Bloomberg Businessweek declaring the I.P.O. YouAreWhatYouLike. Add Pages to Your Facebook "Interest Lists" Instead of Liking Them.

Is Facebook damaging your reputation with sneaky political posts? One of the first rules most of us learn in business is to avoid bringing up controversial subjects with co-workers, colleagues, and customers. 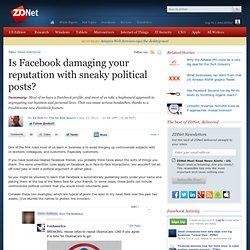 Especially customers. If you have business-related Facebook friends, you probably think twice about the sorts of things you share. The same unwritten rules apply on Facebook as in face-to-face interactions: you wouldn’t tell an off-color joke or start a political argument in either place. So you might be shocked to learn that Facebook is automatically publishing posts under your name and placing them at the top of the News feed for your friends. In some cases, these posts can include controversial political content that you would never voluntarily post. Consider these two examples, which are typical of posts I’ve seen in my news feed over the past two weeks. What your Facebook 'likes' really say about you - tech - 11 March 2013. Facebook likes can reveal private personality traits, according to study. It's no secret that Facebook is a goldmine for advertisers seeking to target specific demographics — but it may surprise you to discover just how much of your personality is revealed by simple activities there.

Researchers from the University of Cambridge and Microsoft Research have been quietly (and innocuously) collecting data on Facebook user likes and personality traits using applications like "MyPersonality" on Facebook, and now they're showing how the data can be used. Simply by tracking what things you've liked on Facebook, the researchers say they're able to determine things like your sex, ethnicity, political leanings, and religion with accuracies over 80 percent. T.M.I. - I Don’t Want to Know. Negative Effects of Facebook. Social Envy - Study Finds Facebook Causes Depression And Isolation.

BERLIN - Social networks like Facebook make many things easier. You can find out right away if Alex got the job or not, and you can not only read about Marie’s vacation, but you can also see all those pictures of her on the beach, too. Study: People Who Overshare on Facebook Just Want to Belong — The Atlantic. Some people find it easier to be their "true selves" online, but posting too much on Facebook doesn't get users the attention they seek. Every time you cringe, roll your eyes, and mute an annoying friend on Facebook for oversharing, you could be invalidating someone who just wants to belong. Facebook Is Fine: Just Hide the Noise. Facebook Study: Users, More Than Algorithms, Choose What News to See. Ever wonder how much news Facebook’s algorithm may be sorting out of your News Feed that you don’t agree with politically?

Not much, the social network says. Facebook studied millions of its most political users and determined that while its algorithm tweaks what you see most prominently in your feed, you’re the one really limiting how much news and opinion you take in from people of different political viewpoints. In an effort to explore how people consume news shared by friends of different ideological leanings, Facebook’s researchers pored over millions of URLs shared by its U.S. We're All Narcissists Now, And That's A Good Thing.

Facebook's friend problem. Can You Trust a Facebook Profile? What Your Klout Score Really Means. Facebook report. Social Media is Hard: The 2013 Landscape of Social Networks in One Infographic. The Conversation Prism: Making Sense of Social Media. Not Being a Troll Isn't Enough: A Handbook to Being a Model Internet Citizen. Remember: Behind Every Keyboard Is a Person, a Lot Like You. The Culture of Shut Up - Jon Lovett. New Study: Internet Trolls Are Often Machiavellian Sadists. In the past few years, the science of Internet trollology has made some strides. Moot is right — we’re a lot better off with online anonymity than we would be without it. Online anonymity (or pseudonymity, which is similar but not quite the same) comes under fire regularly from those who believe that it encourages bad behavior such as bullying and racism, whether in blog comments or on Twitter, or in popular apps like Secret and Whisper.