College Students Say 'Cheese' via Snapchat. Are college students snapping and sharing as they settle back into campus life? 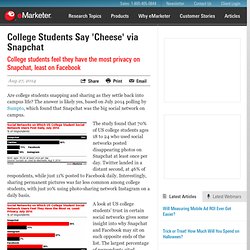 The answer is likely yes, based on July 2014 polling by Sumpto, which found that Snapchat was the big social network on campus. The study found that 70% of US college students ages 18 to 24 who used social networks posted disappearing photos on Snapchat at least once per day. Twitter landed in a distant second, at 46% of respondents, while just 11% posted to Facebook daily. Interestingly, sharing permanent pictures was far less common among college students, with just 10% using photo-sharing network Instagram on a daily basis. Forecast: Tumblr Will Grow 25% In 2014, But It's Slowing Down. Yahoo paid about the same price for Tumblr, around $1 billion, as Facebook did when it acquired Instagram, and the two had similar numbers of users at the time of acquisition, in the realm of 30 million. 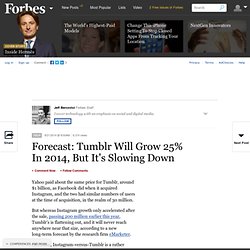 But whereas Instagram growth only accelerated after the sale, passing 200 million earlier this year, Tumblr’s is flattening out, and it will never reach anywhere near that size, according to a new long-term forecast by the research firm eMarketer. Of course, Instagram-versus-Tumblr is a rather artificial comparison; aside from some surface similarities, they’re not much alike. The 6 Critical Types of Social Media Comments You Must Plan For. ‘He’s been taken in for questioning by the police.’ 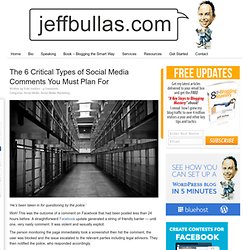 Woh! This was the outcome of a comment on Facebook that had been posted less than 24 hours before. A straightforward Facebook update generated a string of friendly banter — until one, very nasty comment. It was violent and sexually explicit. The person monitoring the page immediately took a screenshot then hid the comment, the user was blocked and the issue escalated to the relevant parties including legal advisors.

This was one of those very rare occurrences, but we were prepared for it. The 'Facebook-Loses-Its-Coolness' Narrative Continues, and Ello Looks to Take Its PlacePR News. Facebook's success, at least initially, was predicated on the idea that it was "cool. 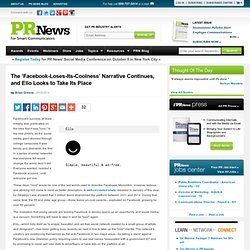 " In the mid-2000's, as the social media giant stormed through college campuses, it was trendy and desirable, the first in a series of social networks that everyone felt would change the world. And it did. Everyone wanted, needed a Facebook account...until everyone got one. These days, "cool" would be one of the last words used to describe Facebook. Monolithic, invasive, tedious and stinking rich come to mind as better descriptors.

The revelation that young people are leaving Facebook in droves opens up an opportunity, and social media is a vacuum. Ello—which bills itself as "a simple, beautiful, and ad-free social network created by a small group of artists and designers"—has been getting buzz recently as next in line to take up the "cool" mantle. You'll Never Believe What Facebook Just Did to Your News Feed. Content marketers, native advertisers and even journalists take warning: Facebook is not looking kindly at your click-bait headlines (for a good example, see my headline above). 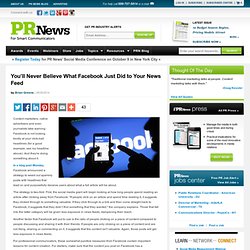 And they're doing something about it. In a blog post Monday, Facebook announced a strategy to weed out spammy posts with headlines that lead on and purposefully deceive users about what a full article will be about. The strategy is two-fold. Why You Need to Stop Avoiding Google+ I'm ashamed to admit that I've been shying away from Google+ for far too long. 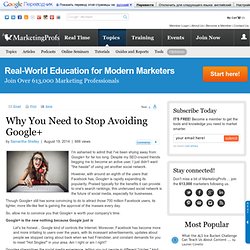 Despite my SEO-crazed friends begging me to become an active user, I just didn't want "the hassle" of using yet another social network. However, with around an eighth of the users that Facebook has, Google+ is rapidly expanding its popularity. Praised typically for the benefits it can provide to one's search rankings, this underused social network is the future of social media, especially for businesses. Though Google+ still has some convincing to do to attract those 700 million Facebook users, its lighter, more life-like feel is gaining the approval of the masses every day.

So, allow me to convince you that Google+ is worth your company's time. Google+ is the new nothing because Google just is Let's be honest... Google+ streamlines the social media experience, letting you put people in different "circles," kind of like real life. Google's SEO wizard told me to stop ignoring Google+ It looks cooler. NYPD Sends its Top Brass to Twitter School. Image: www.experience.com For brands and organizations of all stripes it could be the next frontier for continuing education: Twitter school. 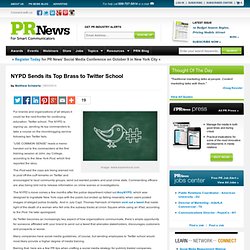 The NYPD is signing up, sending its top commanders to take a course on the microblogging service following two Twitter fails. “USE COMMON SENSE” reads a memo handed out to the commanders at the first training session at John Jay College, according to the New York Post, which first reported the story. The Post said the cops are being warned not to post off-the-cuff remarks on Twitter and encouraged to laud community groups, send out wanted posters and post crime stats. Commanding officers are also being told not to release information on crime scenes or investigations.