Web Resources for Computer Networks, 5. Special thanks go to Andy Dornan for his help with this page. 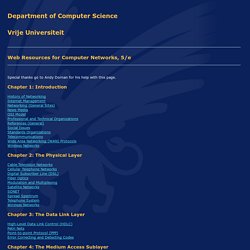 CS_238, Data Communications and Computer Networks. Table of Contents. BOOKS BY WILLIAM STALLINGS. All my books and other Pearson books available via this Web site at a greater discount than online bookstores. 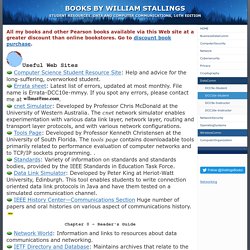 MAC Address Table. Tech TopX: Enterprise Networking 101 - Network Fabrics and Topology. Virtual LAN (VLAN) Virtual LAN. A virtual LAN (VLAN) is any broadcast domain that is partitioned and isolated in a computer network at the data link layer (OSI layer 2).[1][2] LAN is the abbreviation for local area network and in this context virtual refers to a physical object recreated and altered by additional logic. 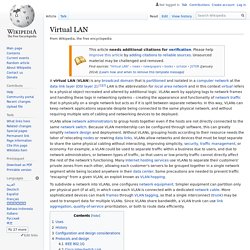 VLANs work by applying tags to network frames and handling these tags in networking systems – creating the appearance and functionality of network traffic that is physically on a single network but acts as if it is split between separate networks. In this way, VLANs can keep network applications separate despite being connected to the same physical network, and without requiring multiple sets of cabling and networking devices to be deployed. Uses[edit] In a network utilizing broadcasts for service discovery, address assignment and resolution and other services, as the number of peers on a network grows, the frequency of broadcasts also increases. History[edit]

Network Plus Certification. This wikibook discusses the information necessary to obtain the CompTIA Network+ certification. 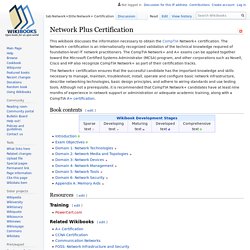 Category:Network protocols. Firewall (computing) Fortinet. Systems Approach - Blog. For almost as long as there have been packet-switched networks, there have been ideas about how to virtualize them. 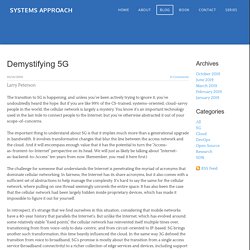 For example, there were early debates in the networking community about the merits of "virtual circuits" versus connectionless networks. But the concept of network virtualization has become more widespread in recent years, helped along by the rise of SDN as an enabling technology. Virtualization has a robust history in computer science, but there remains some confusion about precisely what the term means. Arguably this is due in part to confusion caused by colloquial usage of "virtual" as a synonym for "almost", among many other uses.Virtual memory provides an easy example to help understand what virtualization means in computing. 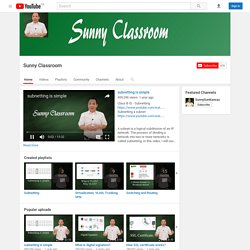 The process of dividing a network into two or more networks is called subnetting. In this video, I will use an example to demonstrate a simple way of subnetting. Some background links Example used in the video: One day your supervisor walks to you, saying: “here is the network ID 192.168.4.0/24, please create three separate networks or subnets for a coffee shop: Sunny Cafe.” Rick Graziani - Cabrillo College. Cabrillo College Office Hours Web Advisor Computer Networking Program Rick's Networking Links Non-Cabrillo Instructors/Students: My materials are now available without a username or password. 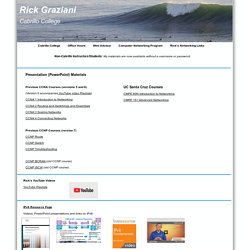 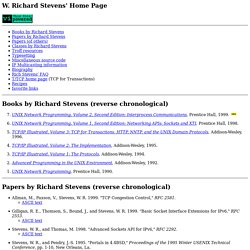 Richard Stevens' Home Page Books by Richard Stevens (reverse chronological) Papers by Richard Stevens (reverse chronological) Papers of Others (alphabetical) Some of the following are papers that I have referenced in my books, often Usenet postings, that are not easily obtainable. Typesetting This section contains some notes on how I write books. Miscellaneous Source Code This used to be a tar file containing the Posix.1g getaddrinfo() function that supports both IPv4 and IPv6. 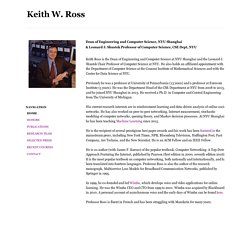 Shustek Chair Professor of Computer Science at NYU. He also holds an affiliated appointment with the Department of Computer Science at the Courant Institute of Mathematical Sciences and with the Center for Data Science at NYU. Previously he was a professor at University of Pennsylvania (13 years) and a professor at Eurecom Institute (5 years). He was the Department Head of the CSE Department at NYU from 2008 to 2013, and he joined NYU Shanghai in 2013. Jim Kurose: homepage. With Keith Ross, I am the co-author of the textbook, Computer Networking: a Top Down Approach (Pearson), now in its 7th edition. 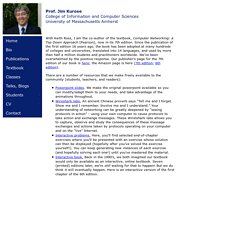 Since the publication of the first edition 16 years ago, the book has been adopted at many hundreds of colleges and universities, translated into 14 languages, and used by more than half a million students and practitioners worldwide. We’ve been overwhelmed by the positive response. Our publisher's page for the 7th edition of our book is here; the Amazon page is here (7th edition; 6th edition).

There are a number of resources that we make freely available to the community (students, teachers, and readers): Powerpoint slides. Computer Networks and Internet Protocol. Introduction to EECS II: Digital Communication Systems.

Principles of a reliable transport protocol

Juniper Networks. Dual-homed. An example of dual-homed devices are enthusiast computing motherboards that incorporate dual Ethernet network interface cards. Usage[edit] In Ethernet LANs, dual-homing is a network topology whereby a networked device is built with more than one network interface.

Each interface or port is connected to the network, but only one connection is active at a time. The other connection is activated only if the primary connection fails. Traffic is quickly rerouted to the backup connection in the event of link failure. In firewalls[edit] Classless Inter-Domain Routing. A method for IP address allocation and routing IP addresses are described as consisting of two groups of bits in the address: the most significant bits are the network prefix, which identifies a whole network or subnet, and the least significant set forms the host identifier, which specifies a particular interface of a host on that network. This division is used as the basis of traffic routing between IP networks and for address allocation policies. Whereas classful network design for IPv4 sized the network prefix as one or more 8-bit groups, resulting in the blocks of Class A, B, or C addresses, Classless Inter-Domain Routing allocates address space to Internet service providers and end users on any address-bit boundary.

CosmoLearning Computer Science. CosmoLearning Computer Science. An Introduction to Computer Networks. Data Communication Networks. Beauty and Joy of Computing. In this course, you will create programs using the snap programming language, you will learn some of the most powerful ideas of computer science, you will be creative, and you will discuss the social implications of computing, thinking deeply about how you can be personally active in promoting the benefits and reducing the possible harms. These are the minimum specifications for running Snap! Units 1-6 cover all of the AP CSP curriculum framework. You are ready for the exam. Units 7 and 8 focus on recursion, a beautiful and powerful CS idea that goes beyond the AP CSP Framework and exam. These units are perfect to enjoy after the exam. Introduction to Computer Applications and Concepts. Introduction One of the fastest growing technology areas is that of telecommunications (often referred to as telecoms).

Organizations have realized that stand-alone computers present many problems: fragmentation of data, lack of control, insufficient integration and limited opportunity for teamwork. One of the major trends over the last decade has been the move not only to have a personal computer on the desk of virtually every knowledge worker, but to have that computer linked to the other computers in the organization. Computer and Network Surveillance. Open Access publishing movement started in early 2000s, when the academic leaders from around the world participated in the formation of the Budapest Initiative. They developed recommendations for Open Access publishing process “which has worked for the past decade to provide the public with unrestricted, free access to scholarly research—much of which is publicly funded. Effective Planning and Analysis of Huawei and Cisco Routers for MPLS Network Design Using Fast Reroute Protection.

How to Configure a Cisco Vpn: 8 Steps. Network emulation. Network Layer. Network simulation. Computer Network and Communications. Switches, Routers, Bridges and LANs. ICTs: device to device communication. This unit looks at communication systems where devices are the main players, passing information to and from each other and possibly acting on that information to produce some kind of outcome. In these interactions, people may not be involved at all, or may have roles that are limited only to the initial setting of schedule (such as when certain tasks should be performed) and parameters (such as particular conditions that should be satisfied before a task is performed). Some people may see this as liberating – relieving humans from the tedious tasks of everyday living. Some may see it as threatening – taking control away from humans and placing it with the computers and machines. How do devices ‘talk’ to each other? Digital communications - OpenLearn - Open University - T305_1. Articles.