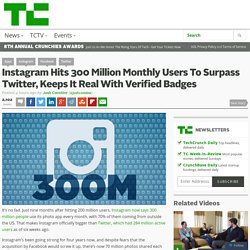 Just nine months after hitting 200 million users, Instagram now says 300 million people use its photo app every month, with 70% of them coming from outside the US. That makes Instagram officially bigger than Twitter, which had 284 million active users as of six weeks ago. Instagram’s been going strong for four years now, and despite fears that the acquisition by Facebook would screw it up, there’s now 70 million photos shared each day, and over 30 billion total. Microsoft-Backed Inlope Is An Interest-Based Local Social Network. Vine's new 'Favorite' button enables push notifications for Viners you never want to miss. Following people on social media is an appreciable convenience, but sometimes your feeds can become cluttered if you’re following too many accounts, making you miss updates from the accounts you most care about. 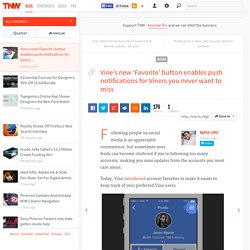 Today, Vine introduced account favorites to make it easier to keep track of your preferred Vine users. Once you tap the star icon on the top right of a profile, you’ll start to receive push notifications every time a favorited user posts a Vine. You can view all your favorites or update notifications from the settings menu as well. Yelp Adds Deals and Gift Certificates for Users in Europe. Yelp today announced that it has added the deal and gift certificate functionality previously only available for US users, to its platform for people based in the UK, France, Germany and Spain. 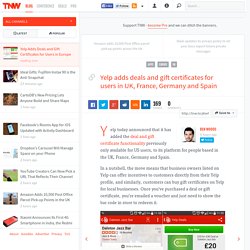 In a nutshell, the move means that business owners listed on Yelp can offer incentives to customers directly from their Yelp profile, and similarly, customers can buy gift certificates on Yelp for local businesses. Once you’ve purchased a deal or gift certificate, you’re emailed a voucher and just need to show the bar code in store to redeem it. Viber Launches Public Chats for Listening in on Celebrities. Mobile messaging and VoIP app Viber today announced a new Public Chats beta feature that will allow public figures and companies to share group discussions with fans. 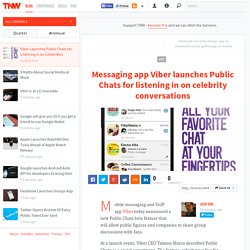 At a launch event, Viber CEO Talmon Marco described Public Chats as a social experiment. The feature, which goes live for users at midnight GMT on Wednesday, is intended to satisfy our morbid curiosity about what other people are chatting about. Snapcash gives us a glimpse at the future of mobile payments. Today Snapchat unveiled a partnership with payment processor Square to launch payments inside the Snapchat app. 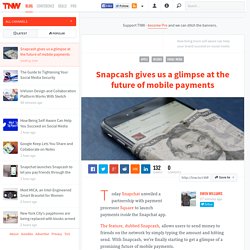 The feature, dubbed Snapcash, allows users to send money to friends on the network by simply typing the amount and hitting send. With Snapcash, we’re finally starting to get a glimpse of a promising future of mobile payments. These types of frictionless payments aren’t exactly new. Square has allowed users to send money over email for some time now, while competitors like Venmo allow users to send payments with simply a mobile number. However, despite the choices before today, they’ve been going about it wrong. Many of these payment companies have been focused on building out their own networks or messaging system in order to pay friends. Naturally, this barrier to entry along with the sheer amount of options in the payment space means that the act of actually getting money to a person is a total pain in the ass. Instagram Video Aads are Rolling Out Today. Memeoirs now lets you make picture books out of your WhatsApp conversations. Tony Hawk's Golden Rules of Instagram. 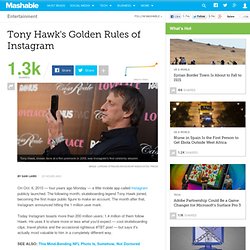 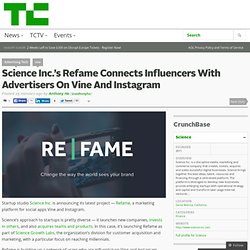 Science’s approach to startups is pretty diverse — it launches new companies, invests in others, and also acquires teams and products. In this case, it’s launching Refame as part of Science Growth Labs, the organization’s division for customer acquisition and marketing, with a particular focus on reaching millennials. Refame is building up a network of users who are influential on Vine and Instagram, and it says it has developed and algorithm which determines which users will help a specific advertiser increase brand awareness and grow their audience among their target demographic.

It then connects both sides so they can create custom social video campaigns, and it offers analytics to track the success of those campaigns. Instagram Ads Arrive in the UK. As promised, Instagram is bringing ads to its users in the UK. 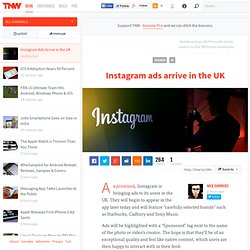 They will begin to appear in the app later today and will feature “carefully selected brands” such as Starbucks, Cadbury and Sony Music. Ads will be highlighted with a “Sponsored” tag next to the name of the photo or video’s creator. The hope is that they’ll be of an exceptional quality and feel like native content, which users are then happy to interact with in their feed. 9 Snapchat Tips and Tricks You May Not Know About. Snapchat's latest update brings a number of impressive improvements to the popular photo-sharing app we all know and love. 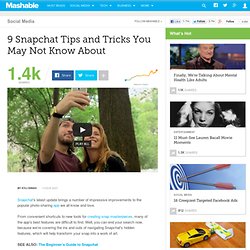 From convenient shortcuts to new tools for creating snap masterpieces, many of the app's best features are difficult to find. Well, you can end your search now, because we're covering the ins and outs of navigating Snapchat's hidden features, which will help transform your snap into a work of art. Instagram Launches One-Touch Photo And Video Messaging App Bolt Outside The US. Instagram is taking on Snapchat by turning your best friends’ faces into the shutter button with today’s official release of its first standalone app Bolt, but only Singapore, South Africa, and New Zealand will get this initial phase of the iOS and Android rollout. 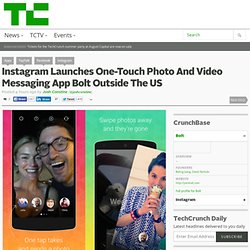 Designed for lightning-fast, ephemeral one-to-one video and photo messaging, Bolt was accidentally outed in promo banners that appeared on Instagram last Thursday. Now the company is officially trickling out Bolt in hopes of powering visual communication with your closest friends and family. Foursquare Reveals New Logo and Previews Overhauled App. Foursquare is preparing a major redesign of its original mobile app. After it pulled the traditional check-in and launched a new, standalone app called Swarm, the company is giving its existing discovery and location-based recommendation app an entirely new look and feel.

For starters, Foursquare is rebranding. The new typeface uses a darker shade of blue, while swapping out the iconic check-in logo for a pink ‘F’ emblem. Inside the app though, you’ll find a new navigation bar at the bottom, with the options Find a Place, Here, Tips and Profile. The first option has large, photo-centric segments recommending places nearby and businesses that cater to your specific tastes. If you have the Swarm app installed, Foursquare is promising that the two will “work seamlessly together.” Strategic Minimalism to Boost Instagram Engagement. Eric Dahan is co-founder and CEO of InstaBrand, the Web’s premier Instagram/Vine influencer platform.

The recent release of Instagram 6.0 and its array of 10 new advanced photo editing features gives users more control over the look and feel of their photos with increased customizability. The 11 Types of Snapchat Users Everyone Knows. Marketing Instagram Style: What Marketers Need to Know. WhatsApp Co-Founder Brian Acton Talks About Not Getting “Swallowed By The Borg” At StartX. In his first speaking engagement ever, at tonight’s StartX event, WhatsApp co-founder Brian Acton talked about the company’s big “F” word (focus), how people in the U.S. just didn’t get the service when it first launched five years ago, and, of course, its record-setting acquisition by Facebook (Acton said that WhatsApp will not be “swallowed by the Borg” after the deal is finalized).

Here's What Instagram's New Editing Tools Can Do For You. Mashable. Photo filters are now just the tip of the iceberg when it comes to editing images on Instagram. How to Increase Your Instagram Visibility: 5 Tips. How A Mobile App For Honesty Can Make You A Better Marketer. Mashable. After 35 years, the Choose Your Own Adventure books are finally doing it for the Vine.

The popular book series, which allow readers to determine the plot's outcome by assuming the role of the main character and making decisions along the way, has been recreated for the six-second video-sharing service. 3 Brands That Are Driving The Future of Social-Mobile Shopping. Franklin Morris is a Senior Writer for Rackspace Digital, the digital marketing infrastructure specialists. Google Gets Around to Joining Instagram. How to Get Your Business Started on Instagram: 5 Tips. Chat App Kik Introduces a Virtual Currency. Messaging apps are the flavor of this year, as evidenced by Facebook’s $19 billion WhatsApp deal, but lately we’ve barely heard from Kik, the Canadian startup that beats WhatsApp, Snapchat and others in the US market. Is Instagram's Separation From Foursquare Premature? Mashable. Snapchat adds IM and video calls, but messages will disappear when you leave a conversation. WhatsApp Passes 500 Million Active Users. Piggybacking: Marketing for The Age of The Network Effect.

How to Get Started With Keek.