Adding or Replacing a Node Device in a QFabric Node Group - TechLibrary. Converting the Device Mode for a QFabric System Component - TechLibrary. Date_range14-Jun-18 Platform and Release Supportclose You can configure some devices to act as a standalone switch or participate in a QFabric system in a particular role. 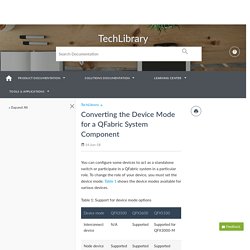 To change the role of your device, you must set the device mode. Table 1 shows the device modes available for various devices. Table 1: Support for device mode options To convert a device to a different mode, issue the request chassis device-mode command and specify the desired device mode. When you convert a device from standalone mode to either Node device or Interconnect device mode, the software prepares the device to be configured automatically by the QFabric system. Caution. Backup and restore config (VPN Config) on SRX Devi... Add, Delete, and Show Licenses - TechLibrary. Date_range5-Dec-18 Platform and Release Supportclose Adding New Licenses (CLI Procedure) Before adding new licenses, complete the following tasks: Purchase the required licenses. 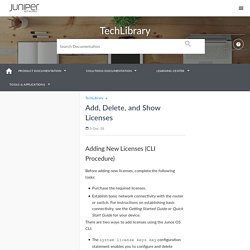 Establish basic network connectivity with the router or switch. For instructions on establishing basic connectivity, see the Getting Started Guide or Quick Start Guide for your device. There are two ways to add licenses using the Junos OS CLI: The system license keys key configuration statement enables you to configure and delete license keys in a Junos OS CLI configuration file.The request system license add operational command installs a license through URL or using the license file.

Note On QFabric systems, install your licenses in the default partition of the QFabric system and not on the individual components (Node devices and Interconnect devices). To add licenses, complete one of the following procedures: SRX Getting Started - Install license for Antivirus, Web Filter, IDP, or Antispam.

This article describes the steps involved in installing a license for Antivirus, Web Filter (URL Filter), IDP or Antispam on a SRX device. 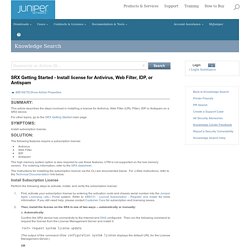 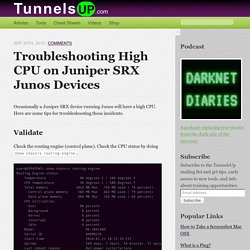 Here are some tips for troubleshooting these incidents. Validate Check the routing engine (control plane). Check the CPU status by doing show chassis routing-engine. Above you can see that the CPUs are 4% idle which means it’s 96% utilized. Next you want to look further and see what processes are running high. Usually even under good conditions, there will be processes that are running at well over 100% utilization. Analyze the processes. Example: Configuring BGP Route Advertisement - TechLibrary. 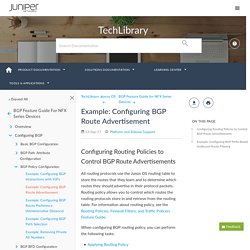 The output queues are serviced using a token mechanism that allows you to assign routes to queues using policies. There is an expedited queue and 16 numbered queues that range in priority from lowest priority (1) to highest priority (16). The lowest priority queue (1) is designated as the default queue. Routes that are not explicitly assigned to a queue by automatic protocol determination or by user policy are placed in this queue.This feature is supported on following products/applications:ProductIntroduced ReleasePrerequisites Configuring Routing Policies to Control BGP Route Advertisements All routing protocols use the Junos OS routing table to store the routes that they learn and to determine which routes they should advertise in their protocol packets. Applying Routing Policy. Examples: Configuring External BGP Peering - TechLibrary.

Understanding External BGP Peering Sessions To establish point-to-point connections between peer autonomous systems (ASs), you configure a BGP session on each interface of a point-to-point link. 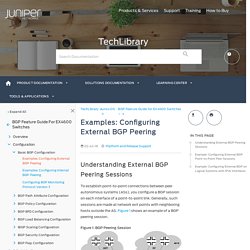 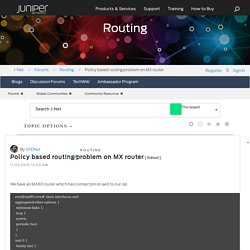 After You added "routing-options interface-routes", I see that it does not work for a different reason. But let me ask questions first: 1/ are the networks 185.9.157.0/27 and 185.9.159.0/24 also locally-attached to irb.100 on Your MX80? How to view the Juniper SRX default applications and complete list for this version. 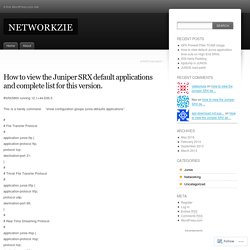 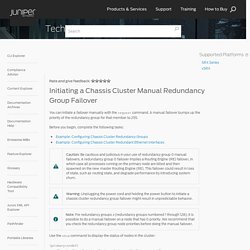 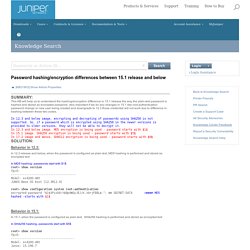 Configure Reth Interface in Junos. Reth interface or redundant Ethernet interface is a special type of interface that has the characteristics of aggregated Ethernet interface. To configure Reth Interface in Junos (SRX), you have to first understand the basics of SRX HA basics. Reth interfaces are configured when SRX device is in HA (High Availability) mode. Initiating a Chassis Cluster Manual Redundancy Group Failover - Technical Documentation - Support - Juniper Networks.

Therefore, the release selector at the top of every page has been removed. To determine if a feature is supported by a specific platform or Junos OS release, refer to the Junos OS release notes, Feature Explorer, the new Release History tables in the documentation, and the release information in the CLI content. For more information, see What's Changed in Junos OS Documentation. The QFabric system software package contains software for all of the different components in the QFabric system, such as the Director group, Interconnect devices, Node devices, and other QFabric system components.

You can upgrade the software on all of the QFabric components at the same time using the request system software add package-name component all reboot command. This topic describes the following tasks: Backing Up the Current Configuration Files. Show fabric administration inventory - Technical Documentation - Support - Juniper Networks. Starting in February 2017, this page contains information for all supported Junos OS releases. Therefore, the release selector at the top of every page has been removed. To determine if a feature is supported by a specific platform or Junos OS release, refer to the Junos OS release notes, Feature Explorer, the new Release History tables in the documentation, and the release information in the CLI content.

For more information, see What's Changed in Junos OS Documentation. Syntax show fabric administration inventory. Juniper Networks - [SRX/J-series] How to copy a file from one node to another node in a JSRP chassis cluster. Solved: Any Command? like as cisco's "show interface statu... Michael Dale - Running JunOS 12.1X47 on first gen SRX240H. Michael Dale So 12.1X47 just came out and no longer supports SRX devices with less than 2GB of ram. I have a couple of spare Juniper SRX240Hs (so first gen devices with 1GB of ram) and would like to test 12.1X47 in my lab, unfortunately I don't have any 2GB ram devices in my lab. When trying to install 12.1X47 on the SRX240H you get the following error: Copying package ... Juniper Networks - [EX] How to login to the member switch of the Virtual Chassis. Juniper Networks - [SRX] Common and safe files to remove in order to increase available system storage.

How to recover the password and configuration for the EX-series Switch Virtual Chassis (VC) setup. Juniper EX Virtual-Chassis notes. Adding or Replacing a Node Device in a QFabric Node Group. Locating the Serial Number on a QFX3500 Device or Component. [SRX] Troubleshooting Chassis Cluster Redundancy Group not failing over. What does priority 0 mean in a JSRP chassis cluster?