LinkedIn's Latest App Takes On The Office Directory. LinkedIn is expanding its arsenal of apps with Lookup, a tool intended to help people connect with their colleagues. 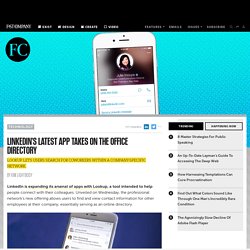 Unveiled on Wednesday, the professional network’s new offering allows users to find and view contact information for other employees at their company, essentially serving as an online directory. "Most companies have some crappy directory service that either they’ve created themselves or they’re [paying for]," Lookup’s project lead, Ankit Gupta, told Re/code. The new app seeks to replace those dysfunctional systems with a streamlined, company-specific network. Lookup users will need to verify their employer by providing a work email address. They will then be able to track down coworkers’ profiles and contact information, without entering specific filters or search terms. 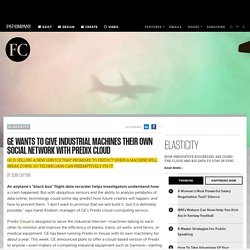 But with ubiquitous sensors and the ability to analyze petabytes of data online, technology could some day predict how future crashes will happen, and how to prevent them. "I don't want to promise that we will build it…but it is definitely possible," says Harel Kodesh, manager of GE's Predix cloud-computing service. Predix Cloud is designed to serve the industrial Internet—machines talking to each other to monitor and improve the efficiency of planes, trains, oil wells, wind farms, or medical equipment.

For Mark Zuckerberg, The Future is Immersive. Three years ago, Facebook didn’t really have a mobile business. 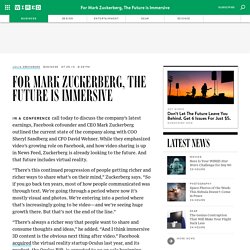 Now, mobile is its core business. Facebook released its second quarter earnings report this afternoon, revealing revenues of more than $4 billion, and that mobile advertising represented about 76 percent of that revenue. That’s up from 62 percent during the same quarter last year. In June 2015, on mobile devices, the company says, it saw 968 million daily average users across all devices, with 844 million checking in daily on mobile, year-over-year increases of 17 and 29 percent respectively. 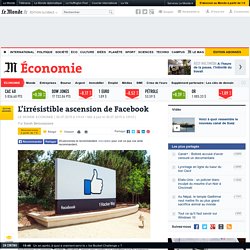 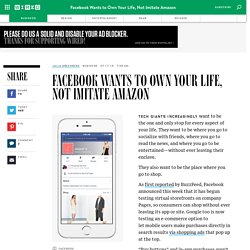 They want to be where you go to socialize with friends, where you go to read the news, and where you go to be entertained—without ever leaving their enclave. They also want to be the place where you go to shop. As first reported by BuzzFeed, Facebook announced this week that it has begun testing virtual storefronts on company Pages, so consumers can shop without ever leaving its app or site. Google too is now testing an e-commerce option to let mobile users make purchases directly in search results via shopping ads that pop up at the top. “Buy buttons” and in-app purchases aren’t new. These tech titans don’t necessarily want, or need, to replace a shopping site like Amazon, or even the IRL Walmart. Friction Free To shop online right now, consumers often have to hop from site to site. 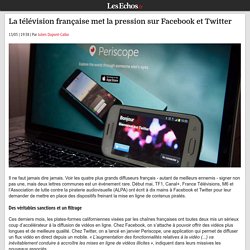 Facebook's New In-App Search Could Be a Google Nightmare. Over the last few weeks, some Facebook users noticed a seemingly small change to their iOS app. 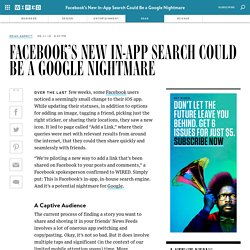 While updating their statuses, in addition to options for adding an image, tagging a friend, picking just the right sticker, or sharing their locations, they saw a new icon. It led to page called “Add a Link,” where their queries were met with relevant results from around the internet, that they could then share quickly and seamlessly with friends. “We’re piloting a new way to add a link that’s been shared on Facebook to your posts and comments,” a Facebook spokesperson confirmed to WIRED. L'appli mobile Pumpkin se rêve en réseau social du paiement - Les Echos. Brice Escarguel sur Twitter : "Mes 10 prédictions pour 2015 via @FredCavazza #Bigdata #Social. 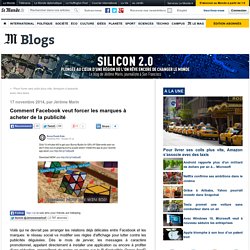 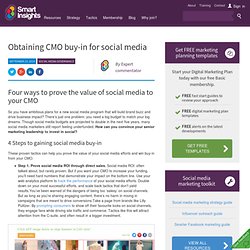 There’s just one problem: you need a big budget to match your big dreams. Though social media budgets are projected to double in the next five years, many social media marketers still report feeling underfunded. How can you convince your senior marketing leadership to invest in social? 4 Steps to gaining social media buy-in These proven tactics can help you prove the value of your social media efforts and win buy-in from your CMO. Step 1. Escarguel : Your Tumblr pictures can be ...

A company will scan your Tumblr pictures to work out what brands you love. Age and Gender Matter in Viral Marketing - Kelsey Libert. By Kelsey Libert | 11:00 AM August 18, 2014. 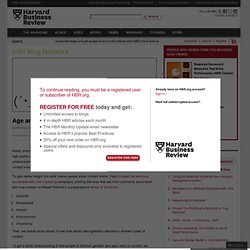 Sales Still Matters More than Social Media - Frank V. Cespedes. By Frank V. Cespedes | 12:00 PM August 15, 2014 It’s become commonplace for observers to tout the transformative potential of digital technologies and bemoan the allegedly slow pace at which companies support these initiatives. Two recent blogs published by HBR.org are representative and, I believe, wrong. Walter Frick, an HBR editor, contrasts the enthusiasm of executives for spending money on digital initiatives versus their relatively unsupportive boards. “Digital growth is appropriately a priority for a diverse swath of organizations, and boards need to get with the program,” he writes.

Both cite a McKinsey survey which, ironically, found that “Organizations’ efforts to go digital . . . are picking up steam.” This is a caricature, but not by much. Good boards ask these questions before getting with the program and, as always, bad boards follow fads. 4 Mistakes Marketers Make When Trying to Go “Viral” - David Spitz. By David Spitz | 11:00 AM August 6, 2014 Can we agree to kill the word “viral” – unless it’s referring to something that leads you to call a doctor, or download a security patch?

The problem with this term is that it suggests there’s something inherent in the content itself that makes it travel. The virus, once released into the wild oceans of social media, preys on its victims. In fact, quite the opposite is the case: unlike viruses, people actively choose to engage with marketing messages and to share them (or not) with friends. That’s why some have suggested describing what the best marketers create as spreadable media rather than viral content. Marketing has always been about meanings created between a company, their audience and a wider culture or community — as the great ad man Jeremy Bullmore once said, “People build brands the way birds build nests, from scraps and straws they chance upon.”

Mistake 1: Trying to start from third gear. Facebook ad clickthrough rates 2014. Value/Importance: ★★★★★ Recommended link: Facebook ad research With the continued decline in organic reach in Facebook, opportunities for brands to get visibility for their brand page status updates is getting severely limited. According to this Social@Ogilvy report, the organic reach of brands’ posts may soon reach zero, meaning that brands will no longer be able to reach their Facebook fans at zero cost. They recommend advertising as one option, which begs the question of the clickthrough rates and costs of Facebook ads. This new report from Facebook retargeting service AdRoll provides useful data for brands to make the case for investment in Facebook advertising. The research shows that overall clickthrough rates of both News Feed targeting on desktop and mobile were significantly better than general web retargeting according to the report, with desktop having 8.1x higher CTR and mobile having 9.1x higher CTR.

Few Consumers Actually Heed Social Media - Ed O'Boyle. By Ed O'Boyle | 1:03 PM June 23, 2014 Ever since Facebook first introduced brand pages in 2007, companies have been flocking to social media. Many business leaders believe that the more they post and share about their products and services, the greater their chances of attracting customers and generating revenue.

But just-released research from Gallup’s State of the American Consumer report suggests that much of these efforts have been misguided. Holiday discounts offered to travellers with a large number of social media followers. Marketing & Advertising Tourism & Travel Offering deals to social network users with a large number of followers is based on the logic that the cost of the discount will hopefully be outweighed by the subsequent exposure and publicity. We’ve already seen the model employed by fashion brand Volga Verdi, and now Hotelied is looking to apply the same thought process to the travel industry. L'implacable recette de Nestlé pour éviter d'être maltraité sur Facebook - Challenges. Facebook affine sa stratégie mobile avec de nouvelles fonctionnalités. Retailers Get Creative with Pinterest. Le groupe HighCo investit dans Milky. How Target’s ‘Awesome Shop’ Uses Pinterest To Boost Sales.

Jive, Microsoft, IBM & Salesforce leaders du Social Software 2013 selon Gartner. The Future of Advertising: 'Pay-Per-Gaze' Is Just the Beginning. Advertising is going to change more in the next 20 years than it has in the last 100. If you need proof of that, just look at the patent Google was granted Thursday for a Google Glass-based ad system. Dubbed "pay-per-gaze," the content would charge advertisers for the number of times someone literally looked at their ad.

The concept is buried pages deep in a patent for a "gaze tracking technique ... implemented with a head-mounted gaze-tracking device that communicates with a server. " It would likely make money hand over fist, and is clearly the main future-focused impetus for the patent. But it's far from the only one. Est-ce la fin du social commerce ? Le Facebook Shopping est une pratique dont nous avons beaucoup parlé en 2011.