Vault 7: Projects. Today, June 15th 2017, WikiLeaks publishes documents from the CherryBlossom project of the CIA that was developed and implemented with the help of the US nonprofit Stanford Research Institute (SRI International). 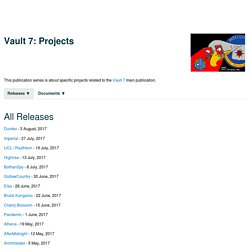 CherryBlossom provides a means of monitoring the Internet activity of and performing software exploits on Targets of interest. In particular, CherryBlossom is focused on compromising wireless networking devices, such as wireless routers and access points (APs), to achieve these goals. Such Wi-Fi devices are commonly used as part of the Internet infrastructure in private homes, public spaces (bars, hotels or airports), small and medium sized companies as well as enterprise offices. Therefore these devices are the ideal spot for "Man-In-The-Middle" attacks, as they can easily monitor, control and manipulate the Internet traffic of connected users.

NSA taps into Google, Yahoo clouds, can collect data 'at will,' says Post. The NSA has secretly tapped into the private fiber-optic networks that connect Google's and Yahoo's worldwide data centers, allowing the spy agency to suck up "at will" metadata and content belonging to users of the companies' services, according to The Washington Post. 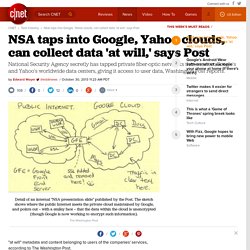 Under a program called MUSCULAR -- a joint project with British NSA counterpart the GCHQ -- the NSA takes advantage of overseas taps to intercept data flowing within Google's and Yahoo's geographically distributed data "clouds," where multiple copies of user data are stored unencrypted, the Post reports. The article cites documents leaked by former NSA contractor Edward Snowden, as well as unnamed "knowledgeable officials. " Such data might include, for example, information in Gmail accounts or in Google Drive files. In a statement to the Post, Google said it was "troubled by allegations of the government intercepting traffic between our data centers, and we are not aware of this activity.

Mass metadata surveillance system based on covert access to the Southern Cross undersea cable network. A major undersea telecommunications cable that connects Australia and New Zealand to North America has been tapped to allow the United States National Security Agency and its espionage partners to comprehensively harvest Australian and New Zealand internet data. 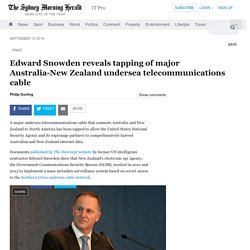 Documents published by The Intercept website by former US intelligence contractor Edward Snowden show that New Zealand's electronic spy agency, the Government Communications Security Bureau (GCSB), worked in 2012 and 2013 to implement a mass metadata surveillance system based on covert access to the Southern Cross undersea cable network. Founded in 1997, Southern Cross owns and operates a Trans-Pacific submarine cable network connecting Australia, New Zealand, Fiji and Hawaii to the internet backbone on the west coast of the United States. The network was developed to service the rapid growth of Internet traffic across the Pacific. Radio Pathway Into Computers unconnected to the internet. By DAVID E. 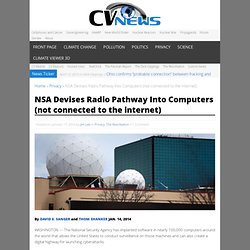 SANGER and THOM SHANKER WASHINGTON — The National Security Agency has implanted software in nearly 100,000 computers around the world that allows the United States to conduct surveillance on those machines and can also create a digital highway for launching cyberattacks. While most of the software is inserted by gaining access to computer networks, the N.S.A. has increasingly made use of a secret technology that enables it to enter and alter data in computers even if they are not connected to the Internet, according to N.S.A. documents, computer experts and American officials.

The technology, which the agency has used since at least 2008, relies on a covert channel of radio waves that can be transmitted from tiny circuit boards and USB cards inserted surreptitiously into the computers. In some cases, they are sent to a briefcase-size relay station that intelligence agencies can set up miles away from the target. No Domestic Use Seen Richard A. A Focus on Defense An Old Technology. Destroying your hard drive is the only way to stop the super-advanced Equation malware.

A cyberespionage group with a toolset similar to ones used by U.S. intelligence agencies has infiltrated key institutions in countries including Iran and Russia, utilizing a startlingly advanced form of malware that is impossible to remove once it's infected your PC. 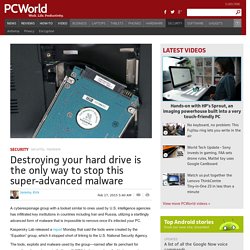 Kaspersky Lab released a report Monday that said the tools were created by the “Equation” group, which it stopped short of linking to the U.S. National Security Agency. The tools, exploits and malware used by the group—named after its penchant for encryption—have strong similarities with NSA techniques described in top-secret documents leaked in 2013. Countries hit the most by Equation include Iran, Russia, Pakistan, Afghanistan, India and China. Targets in those countries included the military, telecommunications, embassies, government, research institutions and Islamic scholars, Kaspersky said. Infirm firmware The report said Equation has knowledge of the drives that goes way beyond public documentation released by vendors. NSA can hack WiFi devices from eight miles away (video)