Programming problems and Competitions. 7 Sneaky Ways to Use Facebook to Spy on Your Competition. Previously on KISSmetrics, I covered the art of 7 sneaky ways to use Twitter to spy on your competition. 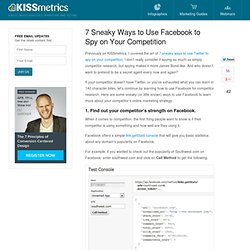 I don’t really consider it spying so much as simply competitor research, but spying makes it more James Bond-like. And who doesn’t want to pretend to be a secret agent every now and again? If your competitor doesn’t have Twitter, or you’ve exhausted what you can learn in 140 character bites, let’s continue by learning how to use Facebook for competitor research. Here are some sneaky (or little known) ways to use Facebook to learn more about your competitor’s online marketing strategy. 1.

When it comes to competition, the first thing people want to know is if their competitor is using something and how well are they using it. Facebook offers a simple link.getStats console that will give you basic statistics about any domain’s popularity on Facebook. This shows the number of likes and shares for their root domain, along with other interesting tidbits of data. 2. 3. 4. 5. 6. 7. How to Successfully Outsource Social Media for Your Business.

Previously we have discussed the importance of branding and building authority through social media through using a hands on approach. 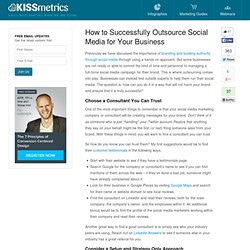 But some businesses are not ready or able to commit the kind of time and personnel to managing a full-force social media campaign for their brand. This is where outsourcing comes into play. Businesses can instead find outside experts to help them run their social media. The question is, how can you do it in a way that will not harm your brand and ensure that it is truly successful? Marketing de conversion et impact du partage de contenu social sur le trafic. Pour beaucoup de spécialistes du marketing en ligne, le trafic vers le site Web demeure le must absolu et la mesure ultime de leurs activités. 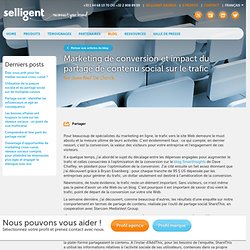 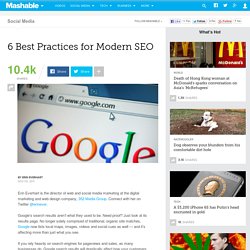 Connect with her on Twitter @erinever. Google’s search results aren’t what they used to be. Need proof? Just look at its results page. No longer solely comprised of traditional, organic site matches, Google now lists local maps, images, videos and social cues as well — and it’s affecting more than just what you see. If you rely heavily on search engines for pageviews and sales, as many businesses do, Google search results will drastically affect how your customers find you. 1. There’s a good probability that a large chunk of the Google searches you perform will display Google Places listings – and consumers are taking notice. I Believe In Google Plus. Is this a contrarian view? 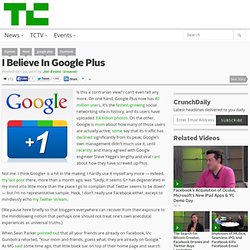 I can’t even tell any more. On one hand, Google Plus now has 40 million users, it’s the fastest-growing social-networking site in history, and its users have uploaded 3.4 billion photos. On the other, Google is mum about how many of those users are actually active; some say that its traffic has declined significantly from its peak; Google’s own management didn’t much use it, until recently; and many agreed with Google engineer Steve Yegge’s lengthy and viral rant about how they have screwed up Plus.

Not me. I think Google+ is a hit in the making. Social Commerce: New Research from Gigya and eMarketer on Facebook Best Practices and Personalization Capabilities #scommerce #scrm « Gigya's Blog. Retailers, if your New Year’s Resolution was to bring social features to your own site, you’re in luck. 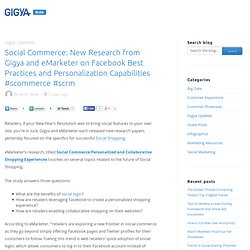 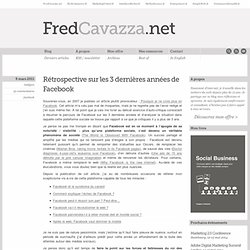 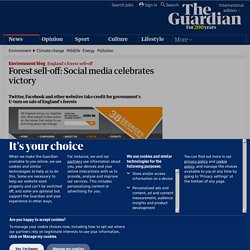 Government to scrap plans to sell our forests," declared the Facebook page of 38 Degrees on Thursday morning, as hundreds of social media users posted their congratulations on the site in the wake of the government climbdown. The jubilation was repeated on Twitter, where the saveourforests hashtag garnered thousands of tweets. The campaign group – the name 38 Degrees comes from the angle of the tipping point that triggers an avalanche – was one of the key opponents of the privatisation proposals. The group raised money for a YouGov poll that found 84% of people were opposed to the government plans, and set up a petition that achieved 533,053 signatures. Many of the campaign's Facebook supporters saw the government U-turn as a victory for "people power". "Great to know the online petitions do help," posted Sara Hancock. David Babbs, executive director of 38 Degrees, agreed. 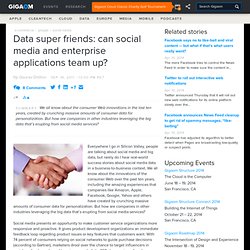 We all know about the innovations of the consumer Web over the past ten years, including the amazing experiences that companies like Amazon, Apple, Facebook, Google, Yahoo and others have created by crunching massive amounts of consumer data for personalization. But how are companies in other industries leveraging the big data that’s erupting from social media services? Social media presents an opportunity to make customer service organizations more responsive and proactive.

It gives product development organizations an immediate feedback loop regarding product issues or key features that customers want. The roadblocks. Twitter Has 100 Million Monthly Active Users, 50% Log In Every Day. Twitter CEO Dick Costolo shared some interesting stats about Twitter's growth, including that it has more than 100 million active users and that signups via iOS device have tripled since the launch of iOS 5. 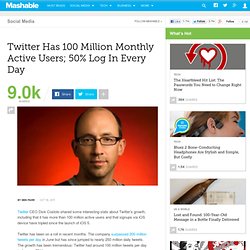 Of those 100 million global active users, half of them log in daily. The company's growth amounts to about 40% quarter on quarter.