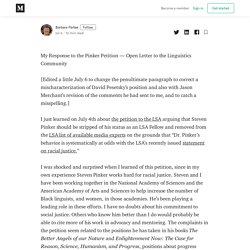 I was shocked and surprised when I learned of this petition, since in my own experience Steven Pinker works hard for racial justice. Steven and I have been working together in the National Academy of Sciences and the American Academy of Arts and Sciences to help increase the number of Black linguists, and women, in those academies. He’s been playing a leading role in these efforts. I have no doubts about his commitment to social justice. An Orwelexicon for Bias and Dysfunction in Psychology and Academia. In this essay, I introduce a slew of neologisms—new words—to capture the tone and substance of much discourse, rhetoric, dysfunction, and bias in academia and psychology.

It’s partly inspired by an article entitled ‘Lexicon for Gender Bias in Academia and Medicine’ by Drs Choo and May in the British Medical Journal (BMJ), although that one was coming at this from a different perspective. They argued that “mansplaining” was just the “tip of the iceberg” and so coined terms such as “Himpediment,” defined as a “man who stands in the way of progress of women.” Adminomania: A delusion that increased administrative and bureaucratic intrusions into people’s lives will actually improve something, fueled primarily by a pervasive blindness to unintended negative side effects.

See Title IX. Biomindophobia: Fear that biology influences the mind. □ Trend Watch: Cipollone: Schiff Has the 'Temerity' - 1/21/2020. □ Trend Watch: Roberts Warns Against 'Pettifogging' - 1/22/2020. Pettifogging (and its related noun pettifogger) had a brief moment of good repute on January 22nd, 2020, after Chief Justice John Roberts used it in a warning issued to both sides of the Trump impeachment trial. 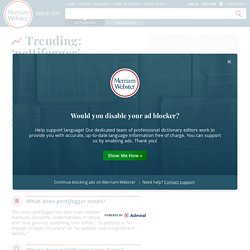 "In the 1905 Swain trial, a senator objected when one of the managers used the word 'pettifogging' and the presiding officer said the word ought not to have been used," Roberts said. "I don't think we need to aspire to that high of a standard, but I do think those addressing the Senate should remember where they are. " — Madeline Holcombe, CNN (cnn.com), 22 Jan. 2020. □ Trend Watch: Schumer: No Intention to be 'Dilatory' - 1/21/2020. 8 of the Sweetest Words for Candy. The chocolate truffle owes its name to the underground fungus celebrated as a delicacy in French haute cuisine. 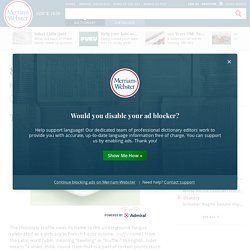 Truffle comes from the Latin word tuber, meaning “swelling” or “truffle.” In English, tuber means “a short, thick, round stem that is a part of certain plants (such as the potato), that grows underground, and that can produce a new plant.” The chocolate version, defined as “a candy made of chocolate, butter, sugar, and sometimes liqueur shaped into balls and often coated with cocoa,” got its name from its resemblance to its namesake.

Truffle comes directly from the French word truffe, which, in addition to the fungus and the candy meanings, can be used in informal language to refer to a large nose or the tip of the muzzle of a dog or cat. Betteridge's law of headlines. An adage that states: "Any headline that ends in a question mark can be answered by the word no. 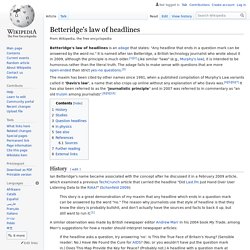 " Betteridge's law of headlines is an adage that states: "Any headline that ends in a question mark can be answered by the word no. " It is named after Ian Betteridge, a British technology journalist who wrote about it in 2009, although the principle is much older.[2] Like similar "laws" (e.g., Murphy's law), it is intended to be humorous rather than the literal truth. The adage fails to make sense with questions that are more open-ended than strict yes–no questions. The maxim has been cited by other names since 1991, when a published compilation of Murphy's Law variants called it "Davis's law", a name that also crops up online without any explanation of who Davis was.[5][6] It has also been referred to as the "journalistic principle" and in 2007 was referred to in commentary as "an old truism among journalists".[9][10] History[edit]

How does the bilingual experience sculpt the brain? Why Symbols Aren’t Forever - Issue 76: Language. In November 2016, a swastika was painted on an elementary school in my Denver, Colorado, neighborhood of Stapleton. 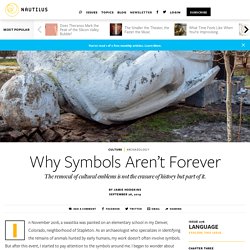 As an archaeologist who specializes in identifying the remains of animals hunted by early humans, my work doesn’t often involve symbols. But after this event, I started to pay attention to the symbols around me. I began to wonder about the creation of symbols—and society’s investment in them—and what these phenomena say about our culture, both old and new. Learning foreign languages should be compulsory, says report. Learning a new language should be compulsory for pupils up to the age of 16, according to a new report highlighting the UK’s recent abysmal record in encouraging young people to study languages other than English. 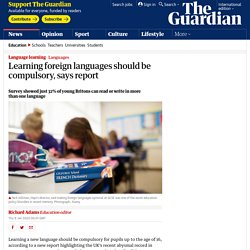 The report published by the Higher Education Policy Institute (Hepi) cites an EU-wide survey showing that just 32% of young people in the UK say they are able to read or write in more than one language, compared with 79% of their peers in France and more than 90% in Germany. The report calls for the overturning of the government’s 2004 decision to drop compulsory study of languages at key stage four – when pupils take GCSE exams in England, Wales and Northern Ireland – which has led to a steep decline in the numbers in England going on to study languages at colleges and universities.

“It was a big mistake to scrap compulsory foreign languages at GCSE,” said Megan Bowler, the report’s author. 'Pataphysics. Philosophy or pseudophilosophy that concerns what lies beyond metaphysics. 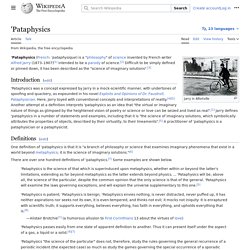 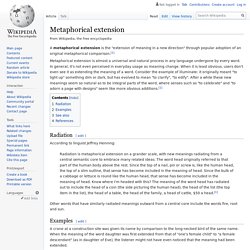 Misnomer. A misnomer is a name that is incorrectly applied to a person, place or object.[1] Misnomers often arise because something was named long before its correct nature was known, or because an earlier form of something has been replaced by something to which the name no longer applies. 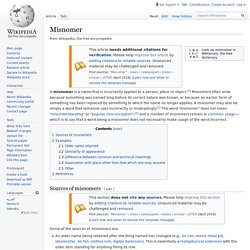 A misnomer may also be simply a word that someone uses incorrectly or misleadingly.[2] The word "misnomer" does not mean "misunderstanding" or "popular misconception",[2] and a number of misnomers remain in common usage — which is to say that a word being a misnomer does not necessarily make usage of the word incorrect. Sources of misnomers[edit] Some of the sources of misnomers are: Examples[edit] Older name retained[edit] Jiffy (time) The term "jiffy" is sometimes used in computer animation as a method of defining playback rate, with the delay interval between individual frames specified in 1/100th-of-a-second (10 ms) jiffies, particularly in Autodesk Animator .FLI sequences (one global frame frequency setting) and animated Compuserve .GIF images (each frame having an individually defined display time measured in 1/100 s). Why Latinx Can’t Catch On. Today, there is a new singular they that refers to specific people, as in “My girlfriend is sick, so they’re staying home.”

This usage, favored as a linguistic reflection of gender fluidity, strikes many, especially people of a certain age, as faintly absurd. They see it as an imposition from above, or at least from without; they regard it as a mere fashion statement. But people way below that certain age are using the new singular they quite fluently. Chances are, it will truly catch on in the language, because for those embracing it, it comes from below, and feels natural and useful in a changing America. Words and Rules (1999/2011) Abstract: "A gem"—Mark Aronoff, New York Times Book Review How does language work?

How do children learn their mother tongue? Why do languages change over time, making Shakespearean English difficult for us and Chaucer's English almost incomprehensible? Olfactory reference syndrome. Olfactory reference syndrome (ORS) is a psychiatric condition in which there is a persistent false belief and preoccupation with the idea of emitting abnormal body odors which the patient thinks are foul and offensive to other individuals.[1][2] The term olfactory reference syndrome comes from: Olfactory, pertaining to the sense of smell.Reference, because of the belief that the behavior of others is referential to a supposed odor.Syndrome, because it is a recognizable set of features that occur together.

Classification[edit] Flatulence. Bodily function of expelling intestinal gas out of the anus Flatulence is defined in the medical literature as "flatus expelled through the anus" or the "quality or state of being flatulent",[1] which is defined in turn as "marked by or affected with gases generated in the intestine or stomach; likely to cause digestive flatulence".[2] The root of these words is from the Latin flatus – "a blowing, a breaking wind".[3] Flatus is also the medical word for gas generated in the stomach or bowels.[4] Despite these standard definitions, a proportion of intestinal gas may be swallowed environmental air, and hence flatus is not totally generated in the stomach or bowels. The scientific study of this area of medicine is termed flatology.[5] Flatus is brought to the rectum and pressurized by muscles in the intestines.

It is normal to pass flatus, though volume and frequency vary greatly among individuals. HBO John Adams - Alexander Hamilton takes Jefferson to school. The Americans Who Still Speak with Regional British English Accents. One Woman, 17 British Accents - Anglophenia Ep 5. Dictionary.com chooses `existential’ as word of the year. NEW YORK (AP) — Climate change, gun violence, the very nature of democracy and an angsty little movie star called Forky helped propel “existential” to Dictionary.com’s word of the year. The choice reflects months of high-stakes threats and crises, real and pondered, across the news, the world and throughout 2019. □ Trend Watch: Sondland: Not Being 'Braggadocio' - 11/20/2019. Apricity and Other Rare Wintery Words. Definition. Good Sentences Are Why We Read.

Index. Past Continuous Tense vs. Past Simple: Mysterious Stalker (ESL Video) Synopsis of English / ESL Video Watch the suspense thriller short about Elissa and the mysterious stalker & present the past continuous tense vs. past simple to students in a pre-intermediate level lesson. Past Simple Tense - Regular Verbs: The Story of Alice & Josh (ESL Video) Improving Abilities in English. Corpus of Contemporary American English (COCA) Parable.

English language is descended from ancient Turkey, experts claim. New Zealand scientists say Indo-European language family - including English, French, German and Hindi - originated up to 9,500 years ago in western Asia. English languages. English-based creole languages are not generally included, as only their lexicon, not their linguistic structure, comes from English.

Breaking The Rhyming Myth. Who Owns English? Linguistics 201: The Dialects of American English. The Dialects of American English The various Germanic tribes (Angles, Saxons, and Jutes) who invaded Britain after 437 AD brought with them their own dialects of West Germanic. The Cambridge History of the English Language - Norman Francis Blake, Roger Lass, Suzanne Romaine. ENGLISH. A Defense of Comic Sans. 25 Crazy Facts About Languages.