Seeing Isn’t Required to Gesture Like a Native Speaker. News People the world over gesture when they talk, and they tend to gesture in certain ways depending on the language they speak. 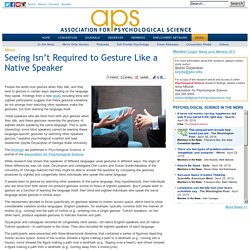 Findings from a new study including blind and sighted participants suggest that these gestural variations do not emerge from watching other speakers make the gestures, but from learning the language itself. “Adult speakers who are blind from birth also gesture when they talk, and these gestures resemble the gestures of sighted adults speaking the same language. This is quite interesting, since blind speakers cannot be learning these language-specific gestures by watching other speakers gesture,” explains psychological scientist and lead researcher Şeyda Özçalışkan of Georgia State University. The findings are published in Psychological Science, a journal of the Association for Psychological Science. While research had shown that speakers of different languages used gestures in different ways, the origin of these differences was not clear. McGurk3. Purists don't like this mix of Acadian French and English, but it may be helping the French language in Canada. 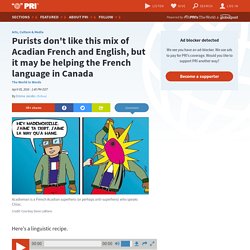 Take French grammar and syntax and add English verbs. Take English verbs and conjugate them like French verbs. Sprinkle in the vocabulary of 17th century French settlers to French Acadia. Translate an English idiom literally to French. Toki Pona: A Language With a Hundred Words. In addition to making Toki Pona simple to learn, the language’s minimalist approach is also designed to change how its speakers think. 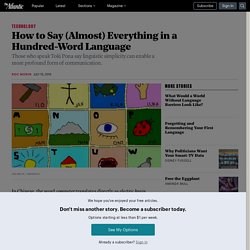 The paucity of terms provokes a kind of creative circumlocution that requires careful attention to detail. An avoidance of set phrases keeps the process fluid. The result, according to Lang, is to immerse the speaker in the moment, in a state reminiscent of what Zen Buddhists call mindfulness. Aphasia: "I thought I was the only one." — VerbalCare. Why do you think most people don't know about Aphasia? 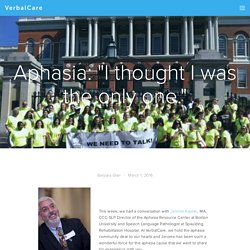 I think one of the reasons most people do not know about aphasia is because the nature of the condition is such that aphasia isolates the individual. This, coupled with frequent mobility challenges and barriers in the community, restricts mobility. I think that people with aphasia are often embarrassed--even depressed--by their condition which further restricts family, social, and community interaction. Ws also 'have regional accents' Cows have regional accents like humans, language specialists have suggested. 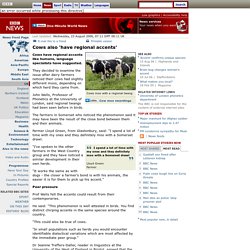 They decided to examine the issue after dairy farmers noticed their cows had slightly different moos, depending on which herd they came from. John Wells, Professor of Phonetics at the University of London, said regional twangs had been seen before in birds. The farmers in Somerset who noticed the phenomenon said it may have been the result of the close bond between them and their animals. Hearing babies babble with hands. Babies exposed to sign language babble silently with their hands even if they can hear, US research shows. 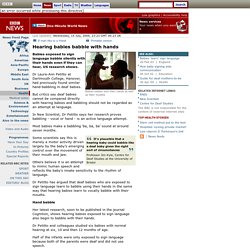 Dr Laura-Ann Petitto at Dartmouth College, Hanover, had previously found similar hand-babbling in deaf babies. But critics say deaf babies cannot be compared directly with hearing babies and babbling should not be regarded as an attempt at language. In New Scientist, Dr Petitto says her research proves babbling - vocal or hand - is an active language attempt. Most babies make a babbling 'ba, ba, ba' sound at around seven months. Some scientists say this is merely a motor activity driven largely by the baby's emerging control over the movement of their mouth and jaw. 1033: Formal Logic. Explain xkcd: It's 'cause you're dumb. 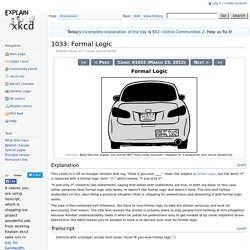 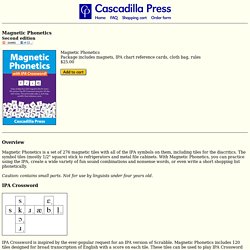 The symbol tiles (mostly 1/2" square) stick to refrigerators and metal file cabinets. With Magnetic Phonetics, you can practice using the IPA, create a wide variety of fun sound combinations and nonsense words, or even write a short shopping list phonetically. Caution: contains small parts. Sunday Morning Exercise: Take "The Wug Test" Jean Berko Gleason is the mother of the “wug test" whose findings rocked the world of linguistics when they were first published in 1958. 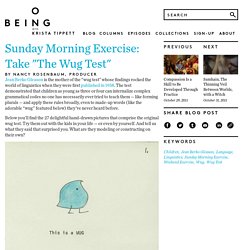 The test demonstrated that children as young as three or four can internalize complex grammatical codes no one has necessarily ever tried to teach them — like forming plurals — and apply these rules broadly, even to made-up words (like the adorable “wug” featured below) they’ve never heard before. Below you'll find the 27 delightful hand-drawn pictures that comprise the original wug test. Try them out with the kids in your life — or even by yourself. Perceptual Dialectology book by Christina Ada Anders (Editor), Markus Hundt (Editor), Alexander Lasch (Editor) 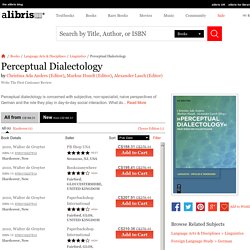 A&S:News Archive-Finding Iconicity in Spoken Languages. Researchers from the University of Miami and the University of Wisconsin-Madison show that iconicity is spread across the vocabulary of spoken languages and suggest that iconicity plays a key role in word learning, similar to what is found in signed languages ‌Have you ever wondered why we call a dog a dog and not a cat? Is this an arbitrary decision, or is it based on iconicity—the resemblance between word structure and meaning?

New research shows that for Indo-European languages, like English and Spanish, iconicity is more common than previously believed. The results are important for understanding the nature of human language, explains Lynn Perry, assistant professor of psychology in the University of Miami College of Arts & Sciences and co-lead author of the study. Joshua Foer: John Quijada and Ithkuil, the Language He Invented. There are so many ways for speakers of English to see the world.

To ensure that participantsunderstood verbal labels of the ve emotions evaluatedin our prosody tasks and could interpret these emotionsfrom other forms of communicative stimuli, each subjectlistened to a series of verbal scenarios (10 trials) or werepresented static facial expressions (40 trials,Pell, 2002)for identi cation of the emotion conveyed. Y evaluated by requiring each listener to discrimi-nate phoneme pairs (Benton phoneme subtest, 30 trials)and to match faces bearing the same physical identity(Benton face subtest, 54 trials).

Phone texting 'helps pupils to spell' Children who regularly use the abbreviated language of text messages are actually improving their ability to spell correctly, research suggests. A study of eight- to 12-year-olds found that rather than damaging reading and writing, "text speak" is associated with strong literacy skills. Researchers say text language uses word play and requires an awareness of how sounds relate to written English. This link between texting and literacy has proved a surprise, say researchers. These latest findings of an ongoing study at the University of Coventry contradict any expectation that prolonged exposure to texting will erode a child's ability to spell. R U Txting? Is the Use of Text Speak Hurting Your Literacy?, Journal of Literacy Research, 2009.

Recent negative media attention surrounding the use of text speak (shorthand abbreviations of words such as "gr8" for "great") and the potentially detrimental effects of text speak on literacy prompted this study of texting and literacy in 80 college students. Thirty-four text speak users and 46 nontext speak users were assessed on their proficiency and familiarity with text speak as well as their standardized literacy levels and misspellings of common text speak words. Results showed that while text speak users were more proficient with the vocabulary, both groups showed familiarity with text speak. More important, there were no significant differences between the two groups in standardized literacy scores or misspellings of common text speak words. Thus, our analyses showed that the use of text speak is not related to low literacy performance. David Crystal - How is the internet changing language today?

I believe that through the Sapir-Whorf hypothesis emotions are conformed to a select few archetypes(specifically love) that predisposition people into unhealthy relationships. CMV. : changemyview. Is Sapir-Whorf now being to taught to under-grads as accepted theory? : linguistics. Sociolinguistics panel: Ask us about language and society! : AskSocialScience. Life without language. Is Bilingualism Really an Advantage? Everybody in Almost Every Language Says “Huh”? HUH?! Pinker Outline. Physical symbol system. Language of thought hypothesis. Unreported World.

Soundsense. The Family That Couldn’t Say Hippopotamus - Issue 17: Big Bangs. There is a family living in Britain, known only as the KE family, with a few members that can’t quite say words like “hippopotamus.” They know the words, but can’t get their mouth positions quite right, so their speech comes out garbled. Some family members have a hard time saying words in the right order, and others have trouble reciting words that begin with the same letter.

Ad libitum. Perífrasis verbales. Odd expression in Mexico: "a poco" UPSID sound selection. June and Jennifer Gibbons. Indeterminacy of translation. Words. On Language - ‘Have Your Cake and Eat It Too’ Linguistics Sample Sentences. EXCLUSIVE: Martin the Pigeon Man, homeless on the streets of Dublin for many years, is not only Maltese but from a very particular social background. This animated history of the English language is wonderful. Viaje por Europa a la última frontera de las palabras: ¿de dónde viene "oso" o "rosa"?