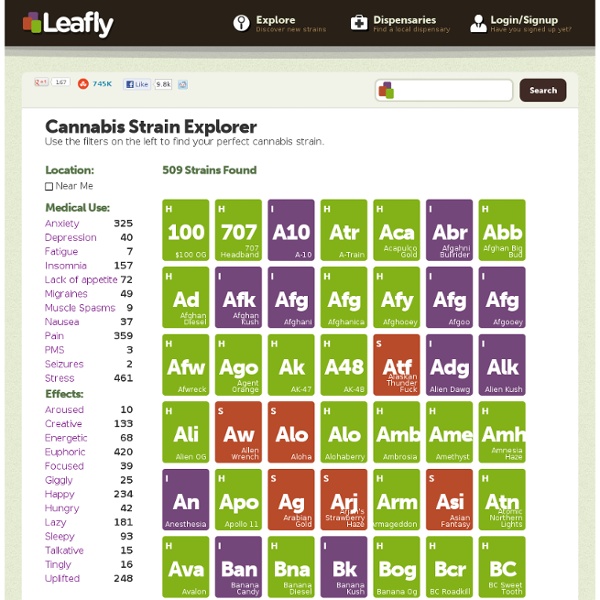 What cannabis actually does to your brain - io9 Chances are they would've ended up brainless morons with or without the pot. It's quite frankly not strong enough of a narcotic to destroy one's life such as you describe. It's very dependent on the user's persona. @Tadashii: Are you also for alcohol and tobacco prohibition? Those ruin more lives every year then marijuana has ever.

13 Strange Highs from Around the World Maybe it’s pessimistic, but when it comes to what people will do to exit their sober minds, I’m rarely surprised. Getting high is an ancient practice for humans, and it will always have a presence in society. At the height of desperation, there simply are no boundaries to the pursuit of inebriation. All thirteen points in this infographic are glaring examples of this. It seems fundamentally human to not want to have one’s face in/around/ or near one’s own excrement. Cannabis Cures Cancer Researchers have now found that the compound, called cannabidiol, has the ability to ‘switch off’ the gene responsible for metastasis in an aggressive form of breast cancer. Importantly, this substance does not produce the psychoactive properties of the cannabis plant. A team from the California Pacific Medical Center, in San Francisco, first spotted its potential five years ago, after it stopped the proliferation of human breast cancer cells in the lab.

Cannabidiol helps neuropathy pain Cannabidiol—a compound derived from marijuana—may be a promising new treatment to prevent the development of painful neuropathy in patients receiving the chemotherapy drug paclitaxel, according to animal experiments reported in the October issue of Anesthesia & Analgesia, official journal of the International Anesthesia Research Society (IARS). "Our preliminary findings…indicate that cannabidiol may prevent the development of paclitaxel-induced allodynia in mice and therefore be effective at preventing dose-limiting paclitaxel-induced peripheral neuropathy in humans," according to the report by Sara Jane Ward, Ph.D., and colleagues of Temple University School of Pharmacy, Philadelphia. In Female Mice, Cannabidiol Reduces Paclitaxel-Induced Neuropathy Paclitaxel—commonly used in the treatment of advanced breast or ovarian cancer—can cause nerve damage (neuropathy), leading to symptoms like pain, numbness, or tingling.

truth: the Anti-drugwar The "Dangers" of Marijuana "The concern with marijuana is not born out of any culture-war mentality, but out of what the science tells us about the drug’s effects. And the science, though still evolving, is clear: marijuana use is harmful. It is associated with dependence, respiratory and mental illness, poor motor performance, and cognitive impairment, among other negative effects.

How To Make Money in Your Spare Time Doing Simple Online Tasks via: Lifehacker Many “online jobs” promising quick riches and little effort are really scams. While the tasks below won’t make you rich, they can earn you a little pocket money on the side—and these days that can make a big difference.

The 24 Types of Pot Smokers « This day and age, it seems like damn near everybody smokes pot. And with weed quickly coming into the mainstream in a big way, that number is only going to go up. So whether you’ve been smoking for years or are just getting into this awesome herb, here is a quick guide to the different types of pot smokers you’ll run into during your toking travels.