The complicated truth about China's social credit system. China's social credit system has been compared to Black Mirror, Big Brother and every other dystopian future sci-fi writers can think up. The reality is more complicated — and in some ways, worse. The idea for social credit came about back in 2007, with projects announced by the government as an opt-in system in 2014. But there's a difference between the official government system and private, corporate versions, though the latter's scoring system that includes shopping habits and friendships is often conflated with the former.

A disturbing video is doing the rounds... - The Conversation. The Social Media Murders. What was eating the people of Hexton city? 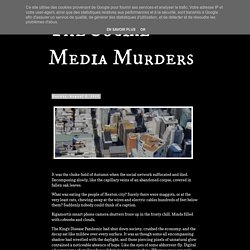 Surely there were maggots, or at the very least rats, chewing away at the wires and electric cables hundreds of feet below them? Suddenly nobody could think of a caption. Rigamortis smart phone camera shutters froze up in the frosty chill. Facebook to tag ‘harmful’ posts as boycott widens. Image copyright Getty Images Facebook has said it will start to label potentially harmful posts that it leaves up because of their news value. 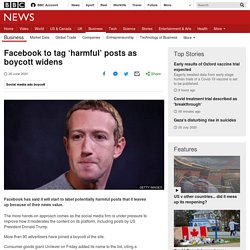 The more hands-on approach comes as the social media firm is under pressure to improve how it moderates the content on its platform, including posts by US President Donald Trump. More than 90 advertisers have joined a boycott of the site. Consumer goods giant Unilever on Friday added its name to the list, citing a "polarized election period" in the US. The maker of Dove soap and Ben & Jerry's ice cream said it would halt Twitter, Facebook and Instagram advertising in the US "at least" through 2020. BBC One - There’s SO much important advice in this... The Independent - 'The greatest propaganda machine in... Hana Kimura: Netflix star and Japanese wrestler dies at 22. Image copyright Getty Images Hana Kimura, a professional Japanese wrestler who appeared in the latest series of Netflix's reality show Terrace House, has died at the age of 22. 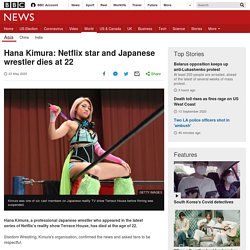 Stardom Wrestling, Kimura's organisation, confirmed the news and asked fans to be respectful. The cause of death was not immediately clear. Shortly before she died, she issued a series of troubling social media posts implying she had been cyber-bullied. The most recent update on her Instagram story on Friday featured a photo of her with her cat, with a caption that read "goodbye".

How did the news go ‘fake’? When the media went social. He Collins Dictionary word of the year for 2017 is, disappointingly, “fake news”. 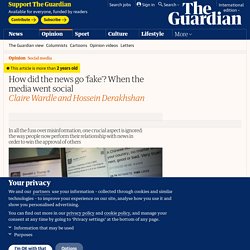 We say disappointingly, because the ubiquity of that phrase among journalists, academics and policymakers is partly why the debate around this issue is so simplistic. The phrase is grossly inadequate to explain the nature and scale of the problem. (Were those Russian ads displayed at the congressional hearings last week news, for example?) Is social media making us dumber? 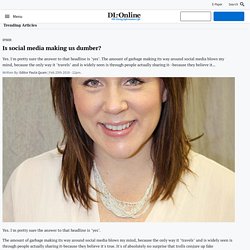 I'm pretty sure the answer to that headline is "yes". The amount of garbage making its way around social media blows my mind, because the only way it "travels" and is widely seen is through people actually sharing it-because they believe it's true. It's of absolutely no surprise that trolls conjure up fake propaganda, but the sheer number of otherwise intelligent, normal people who actually buy into it and pass it along is shocking. When I first saw the post suggesting student survivors of the Parkland, Florida school massacre who were doing TV interviews were nothing more than paid actors, I thought there is NO WAY anybody would believe this.

Social Media Is Making Us Dumber. Here’s Exhibit A. Mr. Pinker goes on to argue that when members of this group encounter, for the first time, ideas that he believes to be frowned upon or suppressed in liberal circles — that most suicide bombers are Muslim or that members of different racial groups commit crimes at different rates — they are “immediately infected with both the feeling of outrage that these truths are unsayable” and are provided with “no defense against taking them to what we might consider to be rather repellent conclusions.”

That’s unfortunate, Mr. Pinker argues, because while someone might use these facts to support bigoted views, that needn’t be the case, because “for each one of these facts, there are very powerful counterarguments for why they don’t license racism and sexism and anarcho-capitalism and so on.” It would be impossible for a reasonable person to watch the eight-minute video and come away thinking Mr. Carol Ann Duffy: Text. Bushfires, bots and arson claims: Australia flung in the global disinformation spotlight. In the first week of 2020, hashtag #ArsonEmergency became the focal point of a new online narrative surrounding the bushfire crisis. 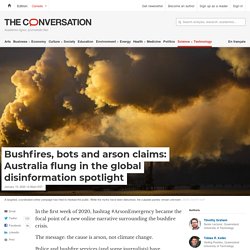 The message: the cause is arson, not climate change. Police and bushfire services (and some journalists) have contradicted this claim. We studied about 300 Twitter accounts driving the #ArsonEmergency hashtag to identify inauthentic behaviour. We found many accounts using #ArsonEmergency were behaving “suspiciously”, compared to those using #AustraliaFire and #BushfireAustralia. Accounts peddling #ArsonEmergency carried out activity similar to what we’ve witnessed in past disinformation campaigns, such as the coordinated behaviour of Russian trolls during the 2016 US presidential election.

Have Smartphones Destroyed a Generation? One day last summer, around noon, I called Athena, a 13-year-old who lives in Houston, Texas. She answered her phone—she’s had an iPhone since she was 11—sounding as if she’d just woken up. We chatted about her favorite songs and TV shows, and I asked her what she likes to do with her friends. Internet-Psychology Glossary. Faking it: how selfie dysmorphia is driving people to seek surgery. 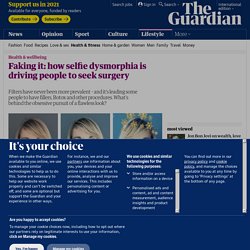 Between the ages of 19 and 21, she was “obsessed with Snapchat, to the point where I had 4,000 followers”. At the peak of her “tragic” behaviour, she reckons now – a year after quitting the image-sharing app – she was taking 25 selfies a day. She liked the sense of having a platform, she says, with the average selfie getting 300 replies. The secret lives of Facebook moderators in America. Content warning: This story contains discussion of serious mental health issues and racism.

TheThe panic attacks started after Chloe watched a man die. She spent the past three and a half weeks in training, trying to harden herself against the daily onslaught of disturbing posts: the hate speech, the violent attacks, the graphic pornography. In a few more days, she will become a full-time Facebook content moderator, or what the company she works for, a professional services vendor named Cognizant, opaquely calls a “process executive.”

For this portion of her education, Chloe will have to moderate a Facebook post in front of her fellow trainees. Digital in 2018: World’s internet users pass the 4 billion mark - We Are Social. The new 2018 Global Digital suite of reports from We Are Social and Hootsuite reveals that there are now more than 4 billion people around the world using the internet. Well over half of the world’s population is now online, with the latest data showing that nearly a quarter of a billion new users came online for the first time in 2017. Africa has seen the fastest growth rates, with the number of internet users across the continent increasing by more than 20 percent year-on-year. Much of this year’s growth in internet users has been driven by more affordable smartphones and mobile data plans.

More than 200 million people got their first mobile device in 2017, and two-thirds of the world’s 7.6 billion inhabitants now have a mobile phone. More than half of the handsets in use today are ‘smart’ devices too, so it’s increasingly easy for people to enjoy a rich internet experience wherever they are. Selfies and self-esteem: The great research conundrum. The short answer: We don't know. 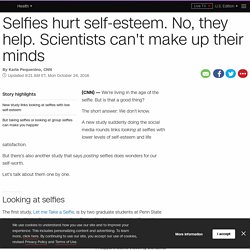 A new study suddenly doing the social media rounds links looking at selfies with lower levels of self-esteem and life satisfaction. But there's also another study that says posting selfies does wonders for our self-worth. Let's talk about them one by one. Looking at selfies The first study, Let me Take a Selfie, is by two graduate students at Penn State University. Why Selfies Do More Harm Than Good. Are you usually punctual or late? 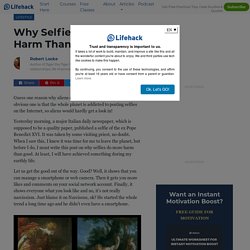 Do you finish things within the time you stipulate? Do you hand in your reports/work on time? Are you able to accomplish what you want to do before deadlines? Are you a good time manager? The selfie-takers dying just to prove how alive they are. Like those high-pitched alarms only teenagers can hear, the song of the selfie siren doesn’t work on everyone. 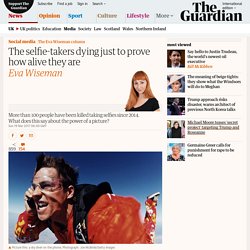 But for those it does, those whose ears are tuned to their suicidal frequency and whose camera has never faced outwards, be warned. Selfie: We take a look at social media's long-term impact on your life - Longform Story. Www.forbes. Social media can be bad for youth mental health, but there are ways it can help. Young people spend a lot of time on social media. They’re also more susceptible to peer pressure, low self-esteem and mental ill-health.

A number of studies have found associations between increased social media use and depression, anxiety, sleep problems, eating concerns, and suicide risk. Certain characteristics of social media may contribute to these negative effects. How Does Social Media Affect Teens? Raising a Teenager in the Digital Age It seems like the Internet just came out of nowhere and changed everything, including childhood. Teens: this is how social media affects your brain. Keeping in touch is no longer about face to face, but instead screen to screen, highlighted by the fact that more than 1 billion people are using Facebook every day. Social media has become second nature -- but what impact is this having on our brain? In a recent study, researchers at the UCLA brain mapping center used an fMRI scanner to image the brains of 32 teenagers as they used a bespoke social media app resembling Instagram.

I deleted my social media apps because they were turning me into an idiot. In January I deleted all the social media apps from my phone because they were turning me into an idiot. Why Do We Get So Obsessed With 'Likes' On Social Media? 11 is the magic number. Social Media and Networking: The Good and Bad Effects on Kids - Raise Smart Kid. Facebook, Twitter, Instagram, Snapchat and other social media sites are godsends to kids and teens who want to get in touch and know what is going on with their friends or relatives. User Data and Cookie Consent. Looking for 'Likes': Teens and Social Media Addiction. The psychology behind likes on social media: are they causing mental health issues? What Is Social Networking Addiction? Social networking addiction is a phrase sometimes used to refer to someone spending too much time using Facebook, Twitter, Instagram and other forms of social media — so much so that it interferes with other aspects of daily life.

There's no official medical recognition of social networking addiction as a disease or disorder. Is social media addictive? Phone addiction is not real, research finds. Eu.usatoday. Future - Is social media bad for you? The evidence and the unknowns. #LikeMinded. Facebook researchers acknowledge social media can be bad for you. Is Social Media a Good Thing or a Bad Thing? Selfies Are Art. Selfies: the good, the bad and the downright irritating. The selfie has become a huge part of modern life. It has transformed the simple self-portrait into something more immediate and has grown in cultural importance, being linked to identity, self-exploration and narcissism. NPR Choice page. NPR Choice page. 'Our minds can be hijacked': the tech insiders who fear a smartphone dystopia.