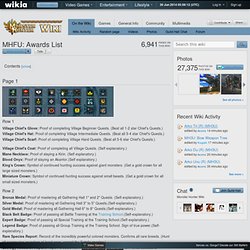 MHFU: Dropped Items Guide. Fallen Objects, they fall off of a monster when they are surprised, flashed bombed, Sonic Bombed, or when stuck in a wall/trap. 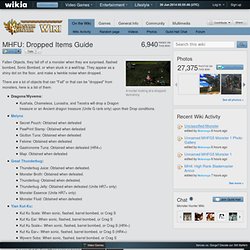 They appear as a shiny dot on the floor, and make a twinkle noise when dropped. There are a lot of objects that can "Fall" or that can be "dropped" from monsters, here is a list of them: Dragons/Wyverns:Kushala, Chameleos, Lunastra, and Teostra will drop a Dragon treasure or an Ancient dragon treasure (Unite G rank only) upon their Drop conditions. MHFU: Nekoht's Quests. Felyne Whim Skills. Elder Quest List (MHFU) MHFU: Item List. Pokke Farm. What is Pokke Farm? 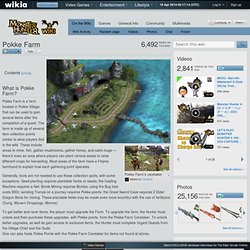 Pokke Farm is a farm located in Pokke Village that can be used to gain several items after the completion of a quest. The farm is made up of several item collection points similar to what players find in the wild. These include areas to mine, fish, gather mushrooms, gather honey, and catch bugs — there's even an area where players can plant various seeds to raise different crops for harvesting. Most areas of the farm have a Felyne farmhand to explain how each gathering point operates. Generally, tools are not needed to use these collection spots, with some exceptions. To get better and rarer items, the player must upgrade the Farm. Pokke Points Pokke points are obtained in three ways, and are generally used to upgrade the Farm. 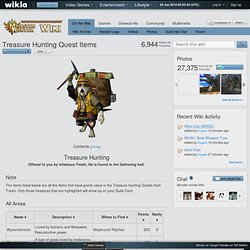 He is found in the Gathering hall. Note The items listed below are all the items that have points value in the Treasure Hunting Quests from Treshi. Only those treasures that are highlighted will show up on your Guild Card. MHFU Boss Carve Guide. Monster Hunter Freedom 2: Boss Carve Guide Requesting it to be locked. 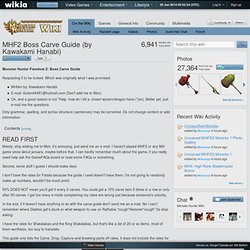 Which was originally what I was promised. Written by: Kawakami Hanabi E-mail: Goten44461@hotmail.com (Don't add me to Msn) Oh, and a good reason is not "Halp, how do i kill a <Insert wyvern/dragon here>"(sic). Better yet, just e-mail me the questions. Only grammar, spelling, and syntax structure (sentences) may be corrected. Mainly, stop adding me to Msn, it's annoying, just send me an e-mail. Second, some stuff I guess I should make clear. I don't have the rates for Fatalis because the guide I used doesn't have them, I'm not going to randomly make up numbers, wouldn't be much point. 50% DOES NOT mean you'll get it every 2 carves. In the end, if it doesn't have anything to do with the carve guide don't send me an e-mail.

I have the rates for Shakalakas and the King Shakalakas, but that's like a list of 20 or so items, most of them worthless, too lazy to translate. MHFU: Trenya Guide. This Article shall list the obtainable items from Trenya in Monster Hunter Freedom Unite. 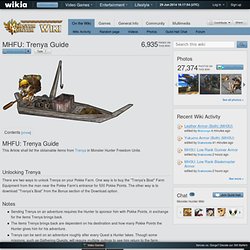 Unlocking Trenya There are two ways to unlock Trenya on your Pokke Farm. One way is to buy the "Trenya's Boat" Farm Equipment from the man near the Pokke Farm's entrance for 500 Pokke Points. The other way is to download "Trenya's Boat" from the Bonus section of the Download option. Notes Sending Trenya on an adventure requires the Hunter to sponsor him with Pokke Points, in exchange for the items Trenya brings back. Armor Skill List (MHFU) List of armor skills found in MHFU. 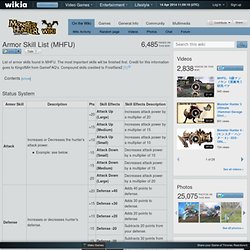 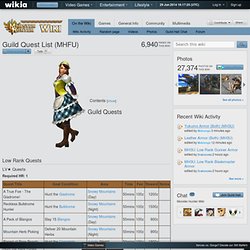 MHFU: Felyne Comrade. As of Monster Hunter Freedom Unite, you can hire a Felyne Comrade (or "Felyne Fighter") that will aid you in a quest. 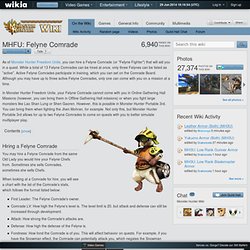 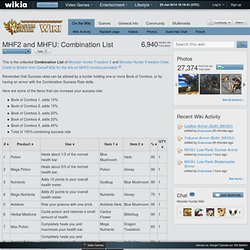 Credit to Boldrin from GameFAQs for the info on MHF2 combos provided. Remember that Success rates can be altered by a hunter holding one or more Book of Combos, or by having an armor with the Combination Success Rate skills. Here are some of the items that can increase your success rate: Armor List (MHFU) Armor is clothing worn by hunters to protect their body against the attacks of monsters. Respectively, Blademaster Armors protect against raw while Gunner Armors protects against elemental damage. The Armors will be ordered by rarity in the Monster Hunter series games. MHFU: Monsters. Homepage. Monster Hunter Freedom Unite is the western release of Monster Hunter Portable 2nd G. It was released across America on June 22, 2009, Australia on the 25th of June, and Europe on the 26th of June.

With over 500 hours of gameplay and previously unreleased monsters, weapons and missions, Monster Hunter Freedom Unite is the biggest game of the series so far. Via Ad-Hoc functionality, players can experience the social gaming phenomenon that’s gripping Japan and adventure with up to four friends for a thrilling and savaging multiplayer hunting party. From devising the strategy to executing the attack, team play with your friends is going to be key to hunting down the ferocious beasts.