Church of the Flying Spaghetti Monster 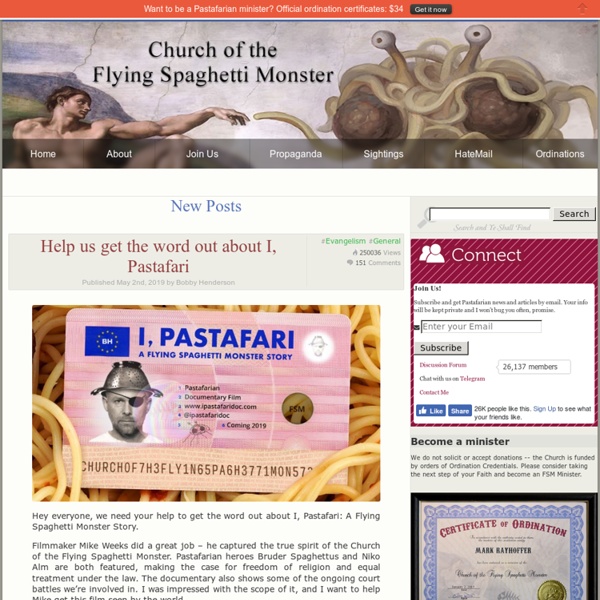 Cannot find Weapons of Mass Destruction - StumbleUpon Australia Gets Drunk, Wakes Up in North Atlantic AUSTRALIA GETS DRUNK, WAKES UP IN NORTH ATLANTIC Tired of Being Isolated and Ignored, Continent Isn't Bloody Moving Sydney, 800 miles S. of Nova Scotia (SatireWire.com) — After what witnesses described as an all night blinder during which it kept droning on about how it was always being bloody ignored by the whole bloody world and would bloody well stand to do something about it, Australia this morning woke up to find itself in the middle of the North Atlantic. "Good Lord, that was a booze up," said a bleary-eyed Australian Prime Minister, John Howard, speaking from his residence at Kirribilli House, approximately 600 nautical miles east of Cape Hatteras, North Carolina. According to Australians and residents of several countries destroyed or lewdly insulted during the continent's nearly 7,000-mile saltwater stagger, the binge began just after noon yesterday at a pub in Brisbane, where several patrons were discussing Australia Day and the nation's general lack of respect from abroad.

Is there a Santa? (from an engineering standpoint) Disclaimer: I found this on the internet and claim no copyrights on it. Thanks. - Joe Also, read this rebuttal (from an engineering standpoint) As a result of an overwhelming lack of requests, and with research help from that renown scientific journal SPY magazine (January, 1990) - I am pleased to present the annual scientific inquiry into Santa Claus. 1) No known species of reindeer can fly. In conclusion - If Santa ever DID deliver presents on Christmas Eve, he's dead now. See other strange crap Send feedback on this page Go to

The Absolute Funniest Posts The Absolute Funniest Posts Follow now to get the best and funniest posts around, and submit your own! Home Submit Archive Mobile RSS This is a cool blog to follow (Source: 0ver-doze, via aimlessscribbles) ¶Tweet it Nov 28th, 2011 Powered by Tumblr. Wicked Wednesday - Sad Children | A Helicopter Mom Why You Should Want to Be a Cat (Pusheen) - Flippin' Comics April 30, 2012 at 8:00am | by AP Source: Pusheen the Cat Like Flippin' Comics for daily content like this!