The Church of the Flying Spaghetti Monster

The Forged Origins of The New Testament. By Tony Bushby Spanish version March 2007 Extracted from Nexus Magazine Volume 14, Number 4 (June - July 2007) from NexusMagazine Website What the Church doesn't want you to know It has often been emphasized that Christianity is unlike any other religion, for it stands or falls by certain events which are alleged to have occurred during a short period of time some 20 centuries ago. 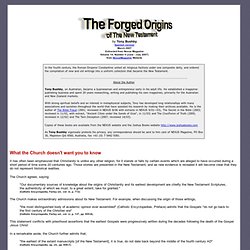 The Church agrees, saying: "Our documentary sources of knowledge about the origins of Christianity and its earliest development are chiefly the New Testament Scriptures, the authenticity of which we must, to a great extent, take for granted. " The Church makes extraordinary admissions about its New Testament. How Our Present Day Bible Came To Be. Almost five million Australians says they have no religious beliefs. A Christmas church service at St Paul's Cathedral, Melbourne. 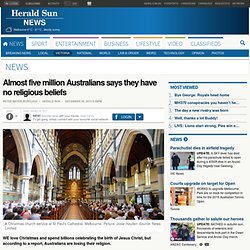 Picture: Josie Hayden Source: News Limited WE love Christmas and spend billions celebrating the birth of Jesus Christ, but according to a report, Australians are losing their religion. In the past 100 years, the number of Australians reporting on the national census that they have "no religion" has jumped from one in 250 in 1911 to more than one in five in 2011. In addition, many of those who nominate a religious affiliation do not actively participate in religious activities.

The latest Australian ­Bureau of Statistics social trends report provides the first in-depth look at the 2011 census data on religion. "Rates of reporting no religion have been steadily rising, and Australia is not alone in this - rates are also rising for countries like New Zealand, England and Wales, Canada, the United States and Ireland," said ABS Director of Social and Progress Reporting Fiona Dowsley. peter.mickelburough@news.com.au. I hate everything the same.

The Mystery Of Twin Cultures On Opposite Sides Of The Atlantic. A friendly athiest. Atheist Foundation of Australia Inc. Right to freedom of thought, conscience and religion or belief. This material is provided to persons who have a role in Commonwealth legislation, policy and programs as general guidance only and is not to be relied upon as legal advice. 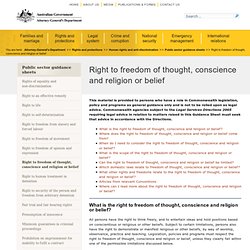 Commonwealth agencies subject to the Legal Services Directions 2005 requiring legal advice in relation to matters raised in this Guidance Sheet must seek that advice in accordance with the Directions. What is the right to freedom of thought, conscience and religion or belief? All persons have the right to think freely, and to entertain ideas and hold positions based on conscientious or religious or other beliefs. Subject to certain limitations, persons also have the right to demonstrate or manifest religious or other beliefs, by way of worship, observance, practice and teaching.

Legislation, policies and programs must respect the right to freedom of thought, conscience and religion or belief, unless they clearly fall within one of the permissible limitations discussed below. Top of page Derogation Limitation Article 18. ‘Strainer’ things have happened - ObserverToday.com. A unique style of headwear was present during newly-seated Pomfret Town Council member Christopher Schaeffer's oath of office Thursday afternoon, but it wasn't intended to keep his head warm. 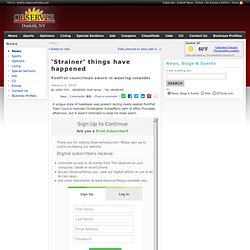 Schaeffer wore a colander (a strainer typically used to drain water from spaghetti) while Town Clerk Allison Dispense administered the oath of office to him before the board's reorganizational meeting. When the OBSERVER asked afterward why he wore a colander on his head, Schaeffer said he was a minister with an even more unique organization - the Church of the Flying Spaghetti Monster. "It's just a statement about religious freedom," he said. "It's a religion without any dogma. " Article Photos OBSERVER Photo by Greg FoxNewly-seated Pomfret Town Council member Christopher Schaeffer (left) recites the oath of office read to him by Town Clerk Allison Dispense. A dogma is a set of principles laid down by an authority as truth, such as the doctrine of an organized religion. Flying Spaghetti Monster.

“I think we can all look forward to the time when these three theories are given equal time in our science classrooms across the country, and eventually the world; One third time for Intelligent Design, one third time for Flying Spaghetti Monsterism, and one third time for logical conjecture based on overwhelming observable evidence.”~ Bobby Henderson (pasta be upon him) “Hail meatsauce, full of beef. 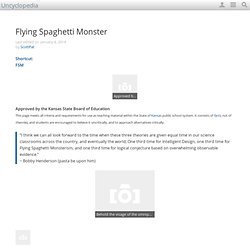 The Supreme Being is powerful and omnipotent. 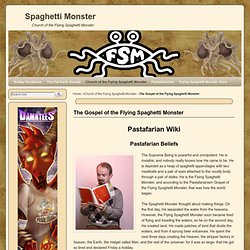