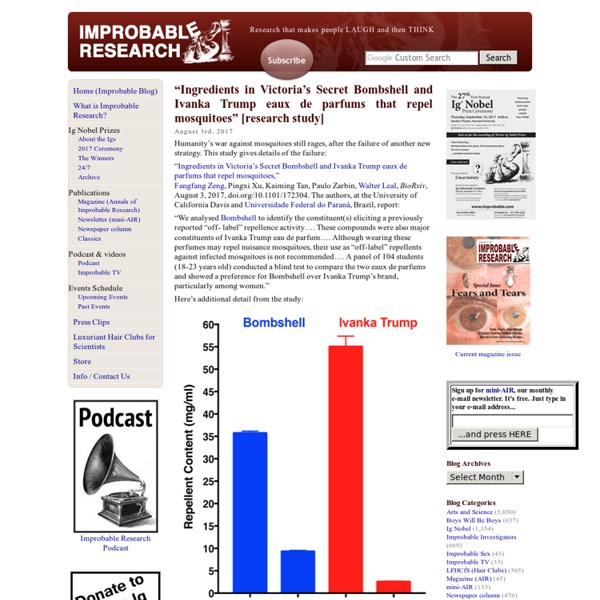 Big little news from Queensland, as reported by Celeste Biever and Lisa Grossman for New Scientist magazine: Longest experiment sees pitch drop after 84-year waitThe pitch has dropped – again. This time, the glimpse of a falling blob of tar, also called pitch, represents the first result for the world’s longest-running experiment…. Up-and-running since 1930, the experiment is based at the University of Queensland in Australia and seeks to capture blobs of pitch as they drip down, agonisingly slowly, from their parent bulk.The Queensland experiment already features in the Guinness World Records and won an IgNobel prize in 2005. It was set up by physicist Thomas Parnell to illustrate that although pitch appears solid, shattering when hit with a hammer at room temperature, it is actually a very viscous liquid.The eventual result follows several near misses, according to the University of Queensland.

100 Weird Facts About the Human Body 100 Weird Facts About the Human Body Friday, April 2, 2010 at 5:23pm by Site Administrator The human body is an incredibly complex and intricate system, one that still baffles doctors and researchers on a regular basis despite thousands of years of medical knowledge. As a result, it shouldn’t be any surprise that even body parts and functions we deal with every day have bizarre or unexpected facts and explanations behind them. From sneezes to fingernail growth, here are 100 weird, wacky, and interesting facts about the human body. A Tour of Plasma Physics in Downtown Cambridge Behind this unassuming door, off a small side street in Cambridge Massachusetts, is the MIT Plasma Science and Fusion Center. There's little indication that inside scientists are using some of the most powerful magnetic fields in the world to manipulate the same stuff that the Sun is made of. The first stop was the Alcator C-Mod tokamak.

Schrödinger's Cat could be visible after all Schrödinger's Cat could be (almost) as easy to observe as the internet's millions of LOLcats, with confirmation that there may be a way round Heisenberg's famous Uncertainty Principle after all. Researchers at the University of Rochester and the University of Ottawa have used a comparatively new technique to directly measure for the first time the polarization states of light. Their work has implications for the weird Uncertainty Principle, which states that certain properties of a quantum system can be known only poorly if other related properties are known precisely. The direct measurement technique was first developed in 2011 by scientists at Canada's National Research Council to measure the wavefunction - a way of determining the state of a quantum system. Such direct measurement had long been believed to be impossible on the basis that you could never fully understand a quantum system through direct observation.

Bees’ Needs: Caffeine It turns out humans aren’t the only ones getting a buzz from coffee. Caffeine can improve memory among honeybees and lead to better plant pollination, according to a recent study published in the journal Science. Researchers led by Geraldine Wright, a professor of neurobiology at Newcastle University in the UK, found that the nectar of citrus flowers, such as those of grapefruit and lemon plants, as well as coffee flowers that produce the ‘arabica’ species used for espresso and filter coffees contain low doses of caffeine. To entice bees to feed on these flowers, Wright and her team trained the insects to associate food with the smell of the flowers. They also trained another group of bees to feed on nectar from the flowers that was sweetened with a sugar, but not did not contain caffeine. After 24 hours, the bees trained on the caffeinated flowers returned to these these plants three times as often as those trained on the sweetened flowers returned to their uncaffeinated plants.

Southern Black Widow Spider Care Sheet [an error occurred while processing this directive] Southern Black Widow Spider (Lactrodectus mactans)by Jon Fouskaris *Please note that ALL true spiders have a certain amount of venom. This species happens to have very strong venom. If you get bitten by it, there is a chance that you will die. Aquascape of the Month September 2009: "Bonsai Garden" - Aquascaping World Forum September 2009 Aquascape of the Month​______________________________________________​Bonsai Garden​by Vincent Tan​ ​ INTRODUCTION[float_left] [/float_left]My name is Vincent Tan. I am 22 years old, and a student of the National University of Singapore. I must admit I am no aquascaping expert, however I am deeply intoxicated by this addictive planted aquarium hobby. It is a learning process every day for me as I venture deeper into this amazing realm. My experience with planted aquariums has definitely been a long and winding journey, filled with its very own ups and downs. I started off with Marine aquariums as I was fascinated with the vibrancy of the colours brought out by live corals and exotic fishes.

Related:
Related:  THE LOUD CRY, Revelation 14:6-12; 18:1-24   -  GOOD FOR A LAUGH   -  laugh of the week and interesting websites   -  Today's Comics Online | Read Comic Strips at GoComics   -  Bad Science   -  Mysterious Universe   -  Hyperbole and a Half   -  Re: Cat Talking, Translation - YouTube   -  Problem Based Learning Activities   -  3 Angels And Anti-Christ - The Biblical TRUTH   -  'Occupy' as a business model: The emerging open-source civilisation - Opinion - Al Jazeera English   -  YouTube - Broadcast Yourself   -  CATASTROIKA WITH ENGLISH SUBTITLES - Video Dailymotion   -  Banned Websites Awareness Day   -  The closing of American academia - Opinion - Al Jazeera English   -  CASES Online: Creating Active Student Engagement in the Sciences   -  THEODICY_1_0004.avi - YouTube   -  The Blueprint by Pastor Ivor Myers - YouTube   -  dream-speech.pdf   -  3 Types Of Project-Based Learning Symbolize Its Evolution   -  Waiting for "Superman" | It's Possible: Together We Can Fix Education | Latest News in Education   -  TPB AFK: The Pirate Bay Away From Keyboard - YouTube   -  10 Apps For More Organized Project-Based Learning   -  Lessons - Robert Kaplinsky   -  Why "20% Time" Is Good for Schools   -  The European Union Explained - YouTube   -  How to Trigger Students’ Inquiry Through Projects | MindShift   -  Trans-Pacific Partnership (TPP): The Terrible Plutocratic Plan   -  Revelation: The Bride, The Beast & Babylon   -  so_long   -  How To Use Google Drive and Evernote To Create Digital Portfolios   -  Free will debate: What does free will mean and how did it evolve?   -  8 Foods These Experts Avoid At All Costs   -  Mathway | Math Problem Solver   -  After reading this, you’ll never look at a banana in the same way again   -  This transatlantic trade deal is a full-frontal assault on democracy | George Monbiot   -  The Most Incredible Prophecy - YouTube