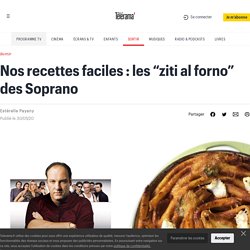 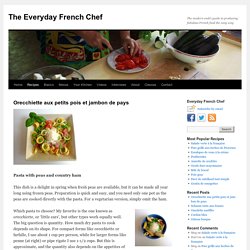 Preparation is quick and easy, and you need only one pot as the peas are cooked directly with the pasta. For a vegetarian version, simply omit the ham. Which pasta to choose? My favorite is the one known as orecchiette, or ‘little ears’, but other types work equally well. For best results, use a top-quality crème fraîche or heavy cream. The quantities below will serve two people. 3/4 cup (90 grams) fresh or frozen peas2 thin slices dry-cured ham2 cups (180 grams) orecchiette, or 3 cups (220 grams) of a larger pasta (see above) 1/2 cup (10 cl) crème fraîche or heavy creamsalt and freshly ground black pepper4 tbsp. freshly grated parmesan Begin by shelling the peas, or measuring out the frozen peas. Slice the ham in half lengthwise, then slice crosswise into little strips. Bring a large pot of water to the boil. Add the pasta. Instant Ramen Cacio e Pepe.

A number of years ago, PBS aired the first season of The Mind of a Chef – an Anthony Bourdain production, featuring David Chang. 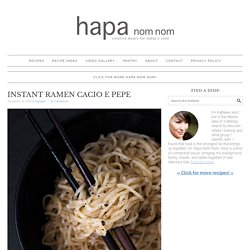 As the title suggests, the show gives the viewer wonderful insight into the way a chef thinks, what their inspirations are, and what they’ve been working on. The show is fantastic and any time I feel like I need a shot of inspiration, I put on an episode… or two. Sometimes I’ll even binge-watch an entire season. Instant Ramen Cacio e Pepe. Rigatoni gorgonzola noix. Gorgonzola and walnuts, rigatoni and cream, topped by arugula — a perfect dish for a rainy May in Paris. 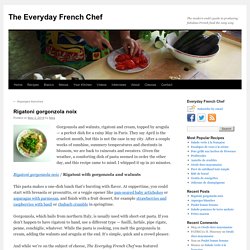 They say April is the cruelest month, but this is not the case in my city. After a couple weeks of sunshine, summery temperatures and chestnuts in blossom, we are back to raincoats and sweaters. Given the weather, a comforting dish of pasta seemed in order the other day, and this recipe came to mind. I whipped it up in 20 minutes. 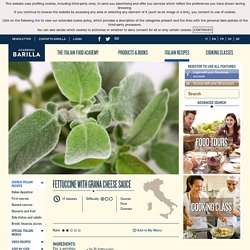 Allow the sauce to thicken over low heat, continuing to stir, and slowly adding the remaining milk. When the mixture has reached the consistency of liquid cream, season it with salt and some freshly grated nutmeg, then blend in two thirds of the grated cheese. Chanterelle Mushroom-filled Pasta Gratin. Legendary chef Jeremiah Tower creates a dish that delights with flavor and smooth texture using only a few ingredients. 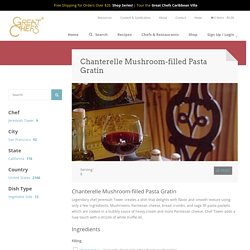 Mushrooms, Parmesan cheese, bread crumbs, and sage fill pasta packets which are cooked in a bubbly sauce of heavy cream and more Parmesan cheese. Chef Tower adds a luxe touch with a drizzle of white truffle oil. To make the filling: Saute the mushrooms, garlic, and sage in the butter in a large saute pan or skillet over medium-high heat for 1 minute, stirring occasionally with a wooden spoon. Reduce heat to medium-low and saute until softened, then increase the heat again and cook until almost no liquid remains.

Penne au potiron et aux noix. Penne with pumpkin and walnuts Autumn is the perfect time for serving this pasta, either as the main course of a simple lunch or supper, or as the starter for an more elaborate meal. 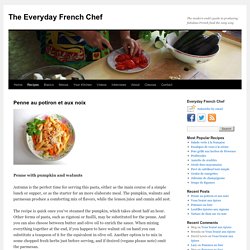 The pumpkin, walnuts and parmesan produce a comforting mix of flavors, while the lemon juice and cumin add zest. The recipe is quick once you’ve steamed the pumpkin, which takes about half an hour. Other forms of pasta, such as rigatoni or fusilli, may be substituted for the penne. And you can also choose between butter and olive oil to enrich the sauce. Lasagnes au doux goût d'été. Absolute Best Ever Lasagna Recipe. Fregula Sarda With Leeks And Sausage Recipe. Tagliatelle with a lemon pork ragù. 'Enraged' penne (in spicy sauce) ‘Enraged’ penne (in spicy sauce) This is one of my go-to recipes on nights when I need to make a quick meal. 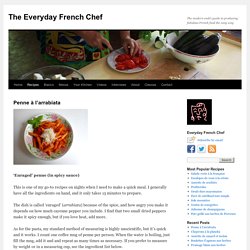 I generally have all the ingredients on hand, and it only takes 15 minutes to prepare. The dish is called ‘enraged’ (arrabiata) because of the spice, and how angry you make it depends on how much cayenne pepper you include. How to cook the perfect pasta alla norma. An unpromising name, for us Brits at least, calling to mind as it does a woman known more for her peas than her pasta, but one that’s utterly right for this time of year, when it’s finally safe to put away the potatoes and cast out the kale in favour of darkly glossy aubergines and plump red tomatoes. 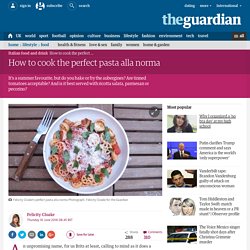 A Sicilian speciality that’s disappointingly said to have been inspired by the beauty of the Bellini opera of the same name, rather than the Tory politician’s wife, norma packs a serious summery punch, while also having enough heft to warm up the most unseasonably dreary of evenings. Rigatoni With White Bolognese Recipe. 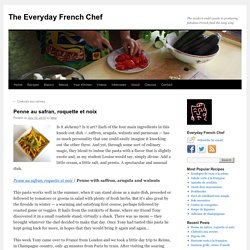 Is it art? Each of the four main ingredients in this knock-out dish — saffron, arugula, walnuts and parmesan — has so much personality that one could easily imagine it knocking out the other three.

Pan-Fried Noodles With Some Spice

Pasta With Caramelized Lemons - Video. Pasta with fresh tomatoes, mozzarella and basil. Pasta with fresh tomatoes, mozzarella and basil In this unusual pasta recipe, the tomatoes are uncooked – simply chopped and combined with mozzarella, basil, garlic and olive oil for a summer meal that is simple to prepare and, more importantly in hot weather, served lukewarm. It is a version of a recipe I first encountered in Sicily in a slightly different form: with the dried sheep’s cheese ricotta salata instead of mozzarella. Which pasta to choose? It really doesn’t matter. Spaghetti is great, as are the various tubular pastas, such as tortiglioni (shown in the photo). 2 tomatoes 1 whole mozzarella, preferably buffala (1/4 pound or 125 g.) 1 clove garlic 2 tbsp. olive oil salt and freshly ground black pepper several sprigs fresh basil 2 cups dry pasta: tortiglioni, pipe rigate, penne or another variety, or 2 handfuls spaghetti Rinse the tomatoes and chop into small cubes.