Pizza Dough with a Poolish – Weekend Bakery. When is it ever NOT a good time to make pizza?! 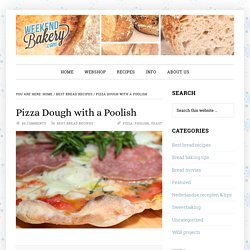 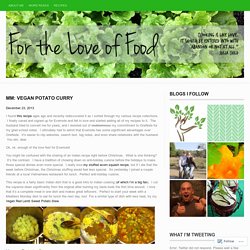 I finally caved and signed up for Evernote and fell in love and started adding all of my recipes to it. The husband tried to convert me for years, and I resisted out of stubbornness my commitment to OneNote for my grad school notes. I ultimately had to admit that Evernote has some significant advantages over OneNote. A carrot in disguise: When a hot dog is not a hot dog. Facts now have alternatives. 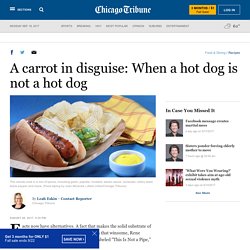 A fact that makes the solid substrate of reality feel strangely spongy. And not in that winsome, Rene Magritte way. Stare at his painting of a pipe, labeled "This Is Not a Pipe," and smirk. True that. The same effect can be conjured on the plate. And delicious. Grill feta and tomatoes for an easy summer appetizer – Twin Cities. We have a nearly weekly potluck with friends, which I love because it means getting a feast while only having to prepare one or two dishes. 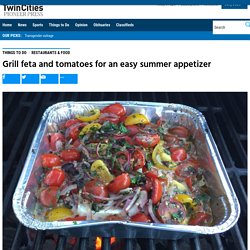 Recently, the theme was Mediterranean, with a giant filet of salmon, a chickpea salad, some olive-oil-coated asparagus and this fantastic, show-stealing dish that’s so simple I can guarantee I’ll repeat it, especially when our own garden tomatoes ripen. The gist of it is, you throw a brick of feta cheese in a foil boat (I used a disposable foil pan), and top it with halved cherry tomatoes and a few other ingredients, then grill until warmed and serve with bread (I used some whole wheat naan, warmed on the grill) or crackers. On a hot summer night, I can see it being dinner. Adapted from smittenkitchen.com. Puffy Corn Pancake With Blackberry Sauce - Recipes. Basil-Cilantro Noodles. Sesame and Cilantro Vermicelli Salad Recipe.

Print Is it hot where you are? 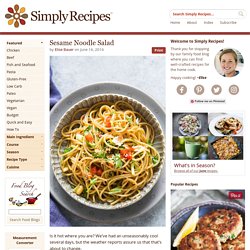 We’ve had an unseasonably cool several days, but the weather reports assure us that that’s about to change. Mushroom Lentil Barley Stew Recipe.

Spicy Rigatoni. When you send a cookbook manuscript to your publisher, the work doesn’t stop there. 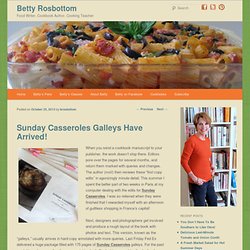 Editors pore over the pages for several months, and return them marked with queries and changes. The author (moi!) Then reviews these “first copy edits” in agonizingly minute detail. This summer I spent the better part of two weeks in Paris at my computer dealing with the edits for Sunday Casseroles. I was so relieved when they were finished that I rewarded myself with an afternoon of guiltless shopping in France’s capital! Quick & Easy Indian Curry Quinoa. Hi everyone! 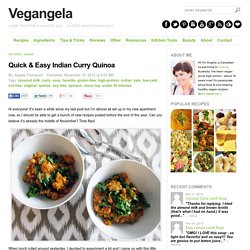 It’s been a while since my last post but I’m almost all set up in my new apartment now, so I should be able to get a bunch of new recipes posted before the end of the year. Can you believe it’s already the middle of November? Time flies! Feta fritters. Pasta with Pesto, Potatoes, and Green Beans Recipe. Shiitake and Roasted Red Pepper Puff Pastry Tart. Position a rack in the center of the oven and heat the oven to 400°F. 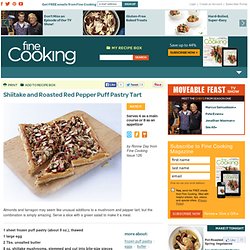 Unfold the pastry sheet on a parchment-lined cookie sheet and score a 3/4-inch border on each side with the tip of a paring knife. Beat the egg in a medium bowl. Brush the border with some of the egg. Prick the rest of the crust all over with a fork and bake until puffed and golden, about 15 minutes. Gently press the center of the pastry to flatten large air pockets. Meanwhile, heat the butter in a 12-inch skillet over medium-high heat until the foam subsides. 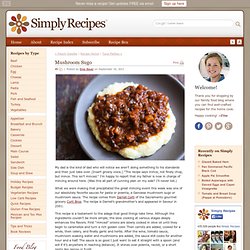 If you are using dry herbs, use half as much. The mincing is important, as the sauce is not strained or puréed. Method 1 Place dry mushrooms to soak in a bowl with 2 cups of warm water. Set aside. Raw Fresh Tomato Sauce. Cut a 1/4-inch slice from the tops of the tomatoes. 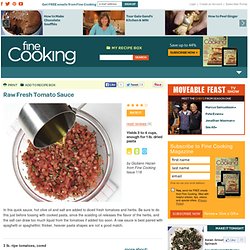 Peel the tomatoes with a vegetable peeler, using a zig-zag motion, halve them crosswise, and remove and discard the seeds. Cut the tomatoes into 1/4-inch dice and transfer to a large serving bowl. Add the basil and oregano. Just before serving, heat the olive oil over medium heat in a 1-quart saucepan until shimmering hot (but not smoking); pour over the tomato mixture, add 2 tsp. salt, and mix well.

Deli-Style Pasta Salad Recipe. Black Bean and Pepper Jack Burgers. User reviews made it? RATE IT! By debm59, 2/21/2014These were just ok. Butternut Squash Risotto with Bacon & Sage. User reviews made it? RATE IT! By JoannnnieM, 12/24/2013This is a regular in our dinner rotation, tons of flavor, warm and comforting. Five stars just isn't enough for this recipe! Potato Gnocchi. Caramelized Onion Quiche Recipe. Slicing Onions Stem to Root To caramelize onions, you'll want to slice them lengthwise, or from stem end to root end.

That way the onions will hold their shape better during the long cooking involved in caramelizing. 1 First, use a sharp knife, get a firm grip on the onion, and slice off the stem end of the onion, by about a 1/2 inch. Then place the onion cut side down on the board to stabilize it, and cut it in half, straight through the root end. 2 Peel back the papery skin of the onions. Vegetable-Chickpea Chili with Fried Almonds. Heat 2 Tbs. of the oil in a 5- to 6-quart heavy-duty pot over medium-high heat until shimmering hot, about 2 minutes. Add the garlic and onion, season with 1 tsp. salt, and cook, stirring occasionally, until the onion begins to soften, 3 to 5 minutes. Stir in the paprika, chili powder, and cumin, cook for 1 minute, and then add the tomatoes and their juice. Stir, smashing the tomatoes against the side of the pot to break them up slightly. Grilled Chickpea Burgers with Creamy Lemon Tahini Sauce.