Combine the water, sugar and kosher salt in the bowl of a stand mixer and sprinkle the yeast on top. 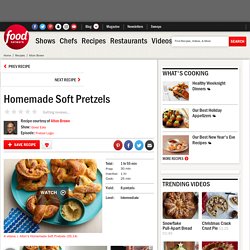 Allow to sit for 5 minutes or until the mixture begins to foam. Add the flour and butter and, using the dough hook attachment, mix on low speed until well combined. Change to medium speed and knead until the dough is smooth and pulls away from the side of the bowl, approximately 4 to 5 minutes. Remove the dough from the bowl, clean the bowl and then oil it well with vegetable oil. Preheat the oven to 450 degrees F. Bring the 10 cups of water and the baking soda to a rolling boil in an 8-quart saucepan or roasting pan. In the meantime, turn the dough out onto a slightly oiled work surface and divide into 8 equal pieces. Cranberry and Feta Pinwheels - The Girl Who Ate Everything.

These Cranberry and Feta Pinwheels have a sweet and salty combo that is the perfect Christmas appetizer. 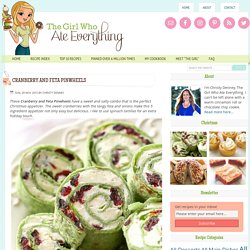 The sweet cranberries with the tangy feta and onions make this 5 ingredient appetizer not only easy but delicious. I like to use spinach tortillas for an extra holiday touch. How was your Thanksgiving? We had a nice spread. Savory Gorgonzola Cheesecake is the Star of the Party. When my husband and I hosted an annual supper last week for his freshman class at Amherst College, I served a familiar menu, one I’ve cooked for more than a decade. 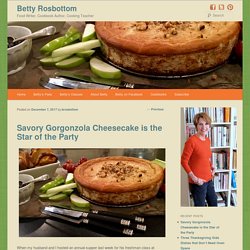 A vegetarian dish of rigatoni tossed in a spicy tomato sauce again anchored the meal partnered by a mixed greens salad and warm crusty bread. As usual, for dessert I set out a bowl of fresh berries and fruit along with several chocolate treats, including a chocolate caramel cake and chocolate almond shortbreads. When it came to appetizers, though, I decided to try a new opener—a savory Gorgonzola cheesecake garnished with apple wedges, toasted croutons, grapes, and some fig jam.

Right before the young people arrived, I had a moment of panic. Grill feta and tomatoes for an easy summer appetizer – Twin Cities. Goat Cheese Bacon Pops Recipe. Print Photography Credit: Sabrina Modelle These goat cheese pops are like your own personal cheese ball. 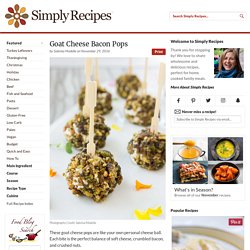 Each bite is the perfect balance of soft cheese, crumbled bacon, and crushed nuts. I’ve made these goat cheese lollipops for many different occasions over the years, from holiday gatherings to cocktail parties. Each time, people ask for the recipe. Baked jalapeño pimento cheese dip. To mark the Super Bowl each year, I like to prepare dishes that reflect each team. 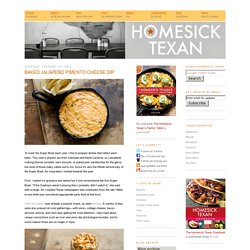 This year’s players are from Colorado and North Carolina, so I pondered making Denver omelets, ham biscuits, or pulled pork sandwiches for the game, but none of those really called out to me. Since it's also the fiftieth anniversary of the Super Bowl, for inspiration I looked towards the past. First, I called my grandma and asked her if she remembered the first Super Bowl.

“If the Cowboys weren’t playing then I probably didn’t watch it,” she said with a laugh. So I studied Texas newspapers and cookbooks from the late 1960s to see what was considered appropriate party food at that time. Black Pepper Taralli Recipe. Baked Goat Cheese Drizzled with Honey. Roasted Grapes Make Delectable Fall Appetizers. Last week I wrote about the delicious overnight oats we enjoyed at our hotel on Nantucket, but that wasn’t the only culinary inspiration the island sparked. 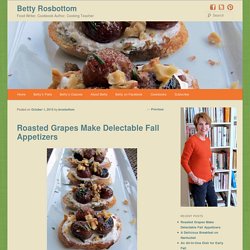 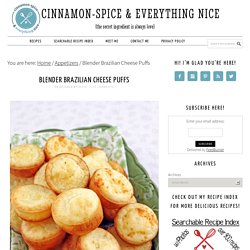 They bake up with crispy outsides and chewy centers, and are best eaten fresh from the oven while still warm. You will need only seven ingredients to make them! One egg, oil, milk, tapioca flour, salt, Parmesan and cheddar cheese. The batter is ridiculously easy to make – just add all the ingredients to a blender or food processor and pulse until combined. Greek Veggie Tartlets Recipe. Bacon-jalapeño cheese ball. While I was home for Thanksgiving, I found in my grandma’s cabinet a North Texas community cookbook from the 1970s. 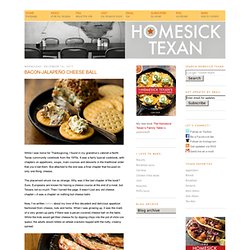 It was a fairly typical cookbook, with chapters on appetizers, soups, main courses and desserts in the traditional order that you’d eat them. But attached to the end was a final chapter that focused on only one thing: cheese. The placement struck me as strange. Why was it the last chapter of the book? Roasted Smoky Almonds. Wednesday, April 17, 2013 Roasted Smoky Almonds Today’s recipe is brought to you by a few things – simplicity, lack of creativity and an insatiable snack craving. 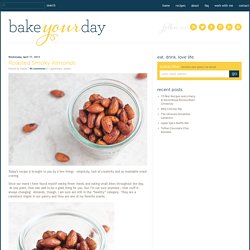 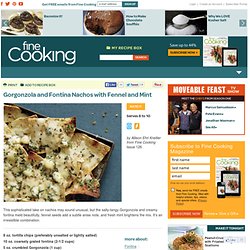 With a few simple tricks, you really can make creamy smooth homemade hummus and yes, we really do think it’s better than store-bought. Jump to the Easy Hummus Recipe or watch this quick video showing you how we make it. Watch How We Make It How To Make Smooth Hummus from Scratch In the past, if we were in the grocery store you could almost bet that one of us would throw a tub of hummus into our cart. Mexican spiced almonds. Caprese Sandwiches. Potato and Chorizo Empanadas Recipe : Tyler Florence. Directions Put the potatoes in a large pot and cover with cold water; add the salt and bring to a boil, uncovered.

When adding butter to flour mix, smoosh the butter by hand. Make slightly longer, flatter. They rise while baking – fauxtudor

Note: These are especially nice served with a soft goat cheese. Simple Gourmet Cook» Blog Archive Artichoke Puffs » Simple Gourmet Cook. Apple Walnut Gorgonzola Turnovers Recipe. If using prepared frozen puff pastry sheets, they need to be defrosted in the refrigerator at least 3 hours before using. Method 1 Place chopped apples in a bowl, microwave on high heat for 5 minutes until apples are cooked through. Remove from heat and let cool. Drain excess moisture. Once cooled, chop further so that the pieces are between 1/4-inch and 1/2-inch square.