Yotam Ottolenghi's chickpea recipes. In a classroom full of every legume, the chickpea would be sat front and centre, my star student to whom I’d show a certain degree of favouritism. 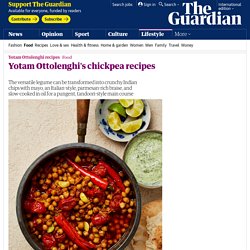 It’s not that the chickpea is any better than its classmates, but, assuming the role of teacher’s pet, it is eager enough constantly to want to please. Its enthusiasm means it gets along with any personality – from fierce chilli to the outwardly funky parmesan – moulding itself unto their own qualities. Here, I’ve used the chickpea in its many forms – dried, tinned and floured – to showcase just how adaptable and malleable this magic bean truly is. Confit tandoori chickpeas (pictured above) These have won the hearts of many, and for good reason – cooking them in the oil without added liquid makes them go super-soft, allowing the dish’s pungent flavours to release into the oil.

Prep 25 min Cook 1 hr 20 minServes 4 Heat the oven to 170C (150C fan)/325F/gas 3. Meanwhile, make the yoghurt dressing. Rachel Roddy's eight rules of pasta, plus her favourite sauce recipes. A few days after we bought our cooker, a book arrived in the post. 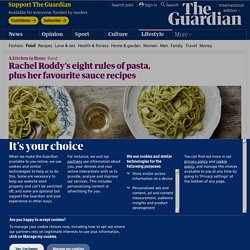 The cooker was a secondhand Gasfire Cucina – identified by the man who came to service and fit it (a 40-minute job that cost twice the price of the cooker) as one of the last to be made entirely by hand before the factory was mechanised in the late 1960s. Creamy One-pot Spinach Shrimp Pasta Recipe by Tasty. Baked sea bream Rota-style recipe - BBC Food. Apple Pie Filling. Homemade Apple Pie Filling. Homemade Apple Pie Filling – this easy recipe takes just a few minutes and tastes so much better than canned pie filling! 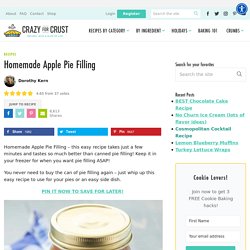 Keep it in your freezer for when you want pie filling ASAP! You never need to buy the can of pie filling again – just whip up this easy recipe to use for your pies or an easy side dish. Save Every week I have a list of things I’m going to bake or cook. At the beginning of the week, usually on Mondays, I make a list of what I have to bake/photograph/video for the week, do an inventory of my pantry, and make a shopping list. Thomasina Miers' recipe for roasted carrots with tahini yoghurt.

Y spice rack holds an eclectic host of jars and containers, all jammed with berries, seeds and barks from around the world. 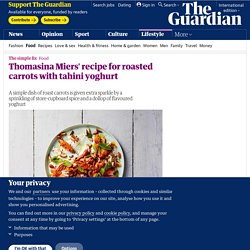 It has pride of place in my kitchen: a pinch of this or that, ground down with my pestle and mortar, adds flavour, aroma and even a bit of glamour to everyday ingredients. It seems nothing short of magic. Now I must make use of all this time at home and label them all properly! Jamie Oliver Recipes. Aioli Fragrant garlicky mayonnaise Would you rather see the UK version? 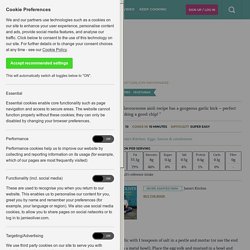 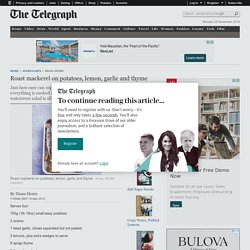 Cut the onions into wedges about 3cm (1in) thick at the thickest part. Place the tin in an oven preheated to 200°C/400°F/gas mark 6 and roast for 30 minutes. Serve this in the dish in which you have cooked it, with extra wedges of lemon on the side. Find wines to match at Telegraph Wine Shop. 'I'm not going anywhere,' declares Vidal in closing rally. Governor of Buenos Aires Province María Eugenia Vidal held the final rally of her campaign for re-election on Thursday evening, three days before the October 27 vote. 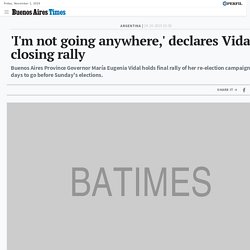 While Mauricio Macri prepared to take the stage to close his own electoral campaign with a massive rally in Córdoba, fellow Juntos por el Cambio hopeful Vidal held her final rally Thursday in Vicente López, a neighbourhood in the north of the Greater Buenos Aires area, at the Platense football club stadium. “I am not going to move a centimetre from here ...I am going to continue to be here, because this path has just begun, it is not ending here,” she said to her supporters. The PASO primary results of August saw Vidal losing by 17 points to her Peronist rival, Frente de Todos candidate Axel Kicillof. 'Celebration of democracy' She continued, claiming the election for the nation's most-populous province would be determined “by a vote, every vote counts.

" Balsamic Baked Chicken Breast With Mozzarella Cheese. Courgettes with feta and lemon. The recipe Set the oven at 200C/gas mark 6. 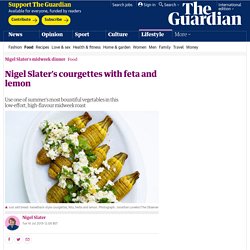 Place 6 large courgettes on a chopping board and slice each one at half-centimetre intervals, cutting almost through to the board. Put the courgettes in a roasting tin, holding them together as you lift, and baste them with 5 tbsp of olive oil. Bake the courgettes for 40 minutes or until they are tender, basting halfway through cooking with roasting juices in the tin. Crumble 200g of feta into a mixing bowl. Chicken pasta bake recipe. We and our partners use technologies such as a cookies on our site to enhance your user experience, personalise content and ads, provide social media features, and analyse our traffic. 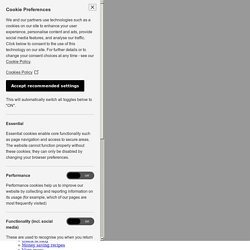 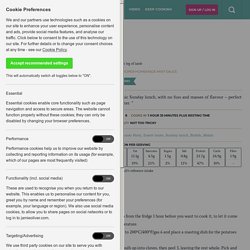 Vegetables recipes. Mediterranean White Fish & Leek Stew Recipe on Food52. Author Notes: An old family recipe with a few ingredients changed to my taste = leek instead of sweet onion and vegetable broth rather than fish stock. I started making this for Christmas Eve although it is a hit throughout the year. It’s a savory, spicy, delicious recipe that is totally adaptable to the seafood you love, crave and have access to. Cooking time is primarily for simmering a sauce that brings it all together. Serve with crusty bread. Sweetpeasandsaffron. 30 Vegetarian Curry Recipes For Easy Vegetable Curry Ideas. Green Thai tofu curry Looking for a quick and easy vegan curry recipe?

Try our Thai curry with smoked tofu and plenty of crunchy veg, ready in 25 minutes and low in calories. Thomasina Miers’ recipe for sea bream with anchoïade crust and hasselback potatoes. Is bread having a renaissance? Restaurants that make their own sourdough increasingly pepper their menus with the leftovers. And why not? I love coming across a crunchy golden breadcrumb in a salad, on a pudding, or as a crust, like here.

Cod with mussels. Zoe Adjonyoh’s corned beef stew. This recipe brings back so many memories of childhood. It’s such simple and economical fare and yet so good for the soul. Don’t be put off by the idea of using canned corned beef; you can buy corned beef from the butcher, but the canned variety is just so handy. My mum also loved this one because it was dinner done and dusted in 20 minutes. (Serves 4) For the chalé sauce600g tinned chopped tomatoes or 375g fresh tomatoes45g (3 tsp) tomato purée1½ onions, roughly chopped7½cm piece fresh root ginger, grated (unpeeled if organic)1 or 2 red scotch bonnet chillis, deseeded1½ tbsp dried chilli flakes1½ tsp sea salt4 garlic cloves (optional) For the stew2 tbsp rapeseed oil or sunflower oil1 onion, diced1 tsp extra-hot chilli powder1 tsp curry powder350g tinned corned beef2 carrots, peeled (if not organic) and diced75g peas4 soft-boiled eggs Make the chalé sauce by putting ingredients into a food processor and whizzing until you have a smooth paste.

STEAMED RECIPES. Slow-cooked leek pappardelle with crispy white beans and lemon. There is no food I can evangelise about more than pasta. The toothsome chew, a silky sauce that hugs each piece … It cooks in little more than 10 minutes, it’s an unrivalled vehicle for flavour and it sates the appetite whatever the season (but most excellently as the months grow colder). Turmeric Roasted Carrots — The Natural Nurturer. Whole Roasted Miso Aubergine. How to make the perfect wiener schnitzel. Schnitzel, beloved of gambolling nuns, is one of those dishes that's mysteriously more than the sum of its parts. With the (very) honourable exceptions of chicken kiev and scotch eggs, I haven't eaten much breaded meat since leaving school, yet somehow, this simple classic, like its Milanese cousin, manages to be both elegant, and utterly satisfying.

Vegetables Recipes. Tomato & Butter Bean Soup Recipe. How to make the perfect shakshuka. Sometimes, I wonder what we all ate before Yotam Ottolenghi came along. Rachel Roddy’s Sicilian pasta with anchovy, lemon and breadcrumbs. How to cook the perfect Lancashire hotpot. One of the great stews of the world, Lancashire hotpot is a dish that makes a virtue of simplicity. The name, often assumed to refer to the cooking vessel used (traditionally a tall, straight-sided earthenware pot) is actually more likely to be connected what lies within, which originally would have been a hodge-podge or jumble of ingredients – whatever was to hand that day.

Traditional Lancashire Hotpot. First trim the lamb of any excess fat and wipe with kitchen paper. In a large frying pan, heat the oil and ¼ oz (5 g) butter until it is very hot, then brown the pieces of lamb two or three at a time until they all have a good brown crust. As they cook, remove them to a wide casserole. Brown the pieces of kidney too, and tuck these in among the meat. Next, fry the onions – add ¼ oz (5 g) butter to the pan if you need any extra fat – cooking them for about 10 minutes till they turn brown at the edges. Food - Recipes : Potato and pea curry with tomato and coriander (aloo dum) Kerryann’s chilli con veggie. Visit our Family Food hub for loads more inspiration, recipes, videos, tips and tricks Close. Roasted Plums with Greek Yogurt recipe. Tartiflette - Savoie (France) : Recipe in English. Tartiflette. How to make perfect bolognese. To write on spag bol is to wade into a mire of controversy thicker and darker than any ragu that ever came out of nonna's kitchen.

People feel very strongly indeed about what is, basically, a meat sauce of no more particular merit than, say, a shepherd's pie, or a chilli, to the extent that, earlier this year, a group of Italian chefs organised a worldwide day of action to promote the "authentic" recipe, as laid down by the Academia Italiana della Cucina back in 1982.