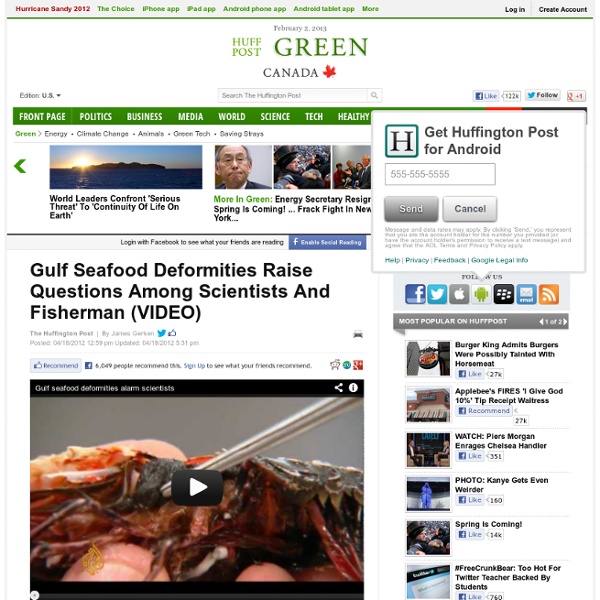 While the true extent of the 1989 Exxon Valdez oil spill was not known for about 4 years, as Al Jazeera notes in the video above, the repercussions of BP's 2010 Deepwater Horizon spill in the Gulf of Mexico may become apparent more quickly. Discovering eyeless shrimp, lesioned fish and other mutated and underdeveloped seafood, fisherman in the Gulf are pointing fingers at the BP spill. Biologist Dr. The Gulf Restoration Network's Scott Eust explained the bizarre shrimp deformities. Al Jazeera reports that both the government and BP maintain that Gulf seafood is safe. A study published last October in the journal Environmental Health Perspectives found that the FDA allowed "up to 10,000 times too much contamination" and didn't identify the risks to children and pregnant women posed by contaminated seafood. Government testing standards were questioned months after the spill. Related on HuffPost:

Green Maven- The Green Search Engine After nuclear disasters, wildlife thrives Radiation from nuclear disasters such as Chernobyl and Fukushima may, surprisingly, have done the local wildlife no harm at all. Until now, it had been believed that radiation following the Chernobyl disaster must have had a dramatic effect on bird populations by causing damage to birds’ antioxidant defence mechanisms. But British scientists have now modeled the production of free radicals from radiation - and found that the birds’ antioxidant mechanisms could easily cope with radiation at the levels seen after Chernobyl and Fukushima. "I wasn’t really surprised by these findings – there have been many high profile findings on the radiation damage to wildlife at Chernobyl but it’s very difficult to see significant damage and we are not convinced by some of the claims," says professor Jim Smith of the University of Portsmouth. Immediately after the Chernobyl accident, extremely high radiation levels did damage organisms.

How to Double Global Food Production by 2050 and Reduce Environmental Damage To feed the world's growing and more affluent population, global agriculture will have to double its food production by 2050. More farming, however, usually means more environmental harm as a result of clearing land, burning fossil fuels, consuming water for irrigation and spreading fertilizer. Agriculture already imposes a greater burden on Earth than almost any other human activity, so simply doubling current practices would ruin large areas of land as well as poisoning rivers and oceans. An international research team led by Jon Foley at the University of Minnesota has concluded that five basic changes in the way agriculture operates—and in the ways we eat—could double food production, yet decrease overall environmental impacts. The steps are as follows: improve crop yields, consume less meat, reduce food waste, stop expanding into rainforests, and use fertilizer and water more efficiently.

Gardening Resources :: National Gardening Association Agro-ecology: Lessons from Cuba on agriculture, food, and climate change Photograph by STR/AFP/Getty Images. On Thursday, April 12, Future Tense, a partnership of Slate, the New America Foundation, and Arizona State, will host a live event in Washington, D.C. on the future of food. “Feeding the World While the Earth Cooks” will examine post-climate-change agriculture, the rising demand for meat, and more. The Studebakers plying up and down Havana’s boardwalk aren’t the best advertisement for dynamism and innovation. Under the Warsaw Pact, Cuba sent rum and sugar to the red side of the Iron Curtain. Unable to afford the fertilizers and pesticides that 20th-century agriculture had taken for granted, the country faced extreme weather events and a limit to the land and water it could use to grow food. Cuban officials faced the crisis clumsily. Cuban peasants proved more enterprising than the government and demanded change. But that took the farmers only so far. In Cuba, peasants encouraged scientists to adopt this approach. So has it worked?

Honey On Tap From Your Own Beehive - Flow™ Hive Home Chickens Fed Caffeine, Banned Antibiotics, and Prozac Often Without The Farmer’s Knowledge qmnonic'/CC BY 2.0 It’s no surprise that conventionally factory farmed chickens aren't fed the best diet. We already knew that they were routinely fed arsenic. In fact, a 2004 study from the Institute for Agriculture and Trade Policy showed that more than half of store-bought and fast-food chickens contained elevated levels of arsenic. Roughly 2.2 million pounds of it are being used every year to produce 43 billion pounds of poultry. It's called roxarsone and it's used to fight parasites and increase growth in chickens. New research not only confirms use of arsenic, but finds the addition of a frightening elixir of drugs that includes caffeine, banned antibiotics, and even Prozac. Their Feathers Tell the Tale By doing a test on their feathers, which is similar to that of human fingernails in the way it accumulates chemicals, they found caffeine, antihistamines, acetaminophen, fluroquinolones (banned antibiotics), arsenic, and even Prozac (in chicken imported from China).