WHERE AM I: REGIONS, CONTINENTS ETC.

United Nations geoscheme. Statistical regions as defined by the UNSD. 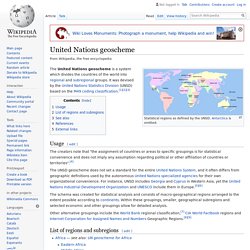 Antarctica is omitted. The United Nations geoscheme is a system which divides the countries of the world into regional and subregional groups. It was devised by the United Nations Statistics Division (UNSD) based on the M49 coding classification.[1][2][3] Usage[edit] The creators note that "the assignment of countries or areas to specific groupings is for statistical convenience and does not imply any assumption regarding political or other affiliation of countries or territories".[4] The schema was created for statistical analysis and consists of macro-geographical regions arranged to the extent possible according to continents. 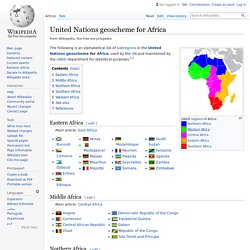 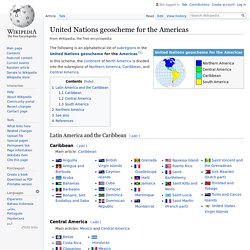 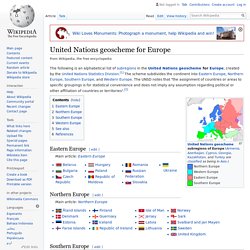 The UNSD notes that "the assignment of countries or areas to specific groupings is for statistical convenience and does not imply any assumption regarding political or other affiliation of countries or territories".[2] United Nations geoscheme for Oceania. From Wikipedia, the free encyclopedia The following is an alphabetical list of subregions in the United Nations geoscheme for Oceania.[1] Oceania Geopolitical Oceania in green. 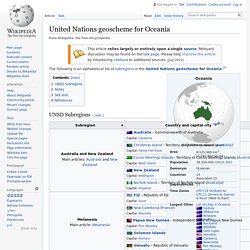 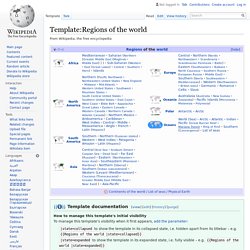 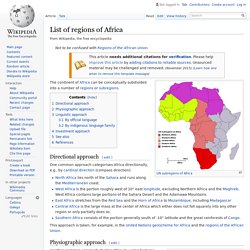 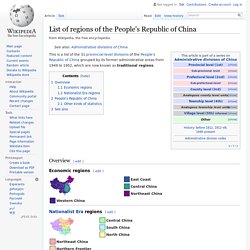 Regions Defined. Apart from the global continental regions, there are also hydrospheric and atmospheric regions that cover the oceans, and discrete climates above the land and water masses of the planet. 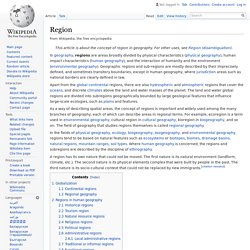 The land and water global regions are divided into subregions geographically bounded by large geological features that influence large-scale ecologies, such as plains and features. As a way of describing spatial areas, the concept of regions is important and widely used among the many branches of geography, each of which can describe areas in regional terms. For example, ecoregion is a term used in environmental geography, cultural region in cultural geography, bioregion in biogeography, and so on.

The field of geography that studies regions themselves is called regional geography. A region has its own nature that could not be moved. Globalization[edit] Global regions distinguishable from space, and are therefore clearly distinguished by the two basic terrestrial environments, land and water. D. Continent. Definitions and application[edit] A Dymaxion map shows land masses with minimal shape distortion By convention, "continents are understood to be large, continuous, discrete masses of land, ideally separated by expanses of water. 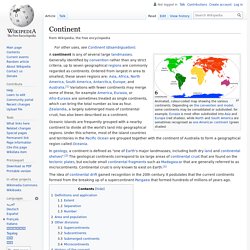 "[2] Many of the seven most commonly recognized continents identified by convention are not discrete landmasses separated completely by water. The criterion "large" leads to arbitrary classification: Greenland, with a surface area of 2,166,086 square kilometres (836,330 sq mi) is considered the world's largest island, while Australia, at 7,617,930 square kilometres (2,941,300 sq mi) is deemed the smallest continent. The Earth's major landmasses all have coasts on a single, continuous world ocean, which is divided into a number of principal oceanic components by the continents and various geographic criteria.[3][4] Template:Continents of the world. How to manage this template's initial visibility To manage this template's visibility when it first appears, add the parameter: |state=collapsed to show the template in its collapsed state, i.e. hidden apart from its titlebar – e.g.

{{Continents of the world |state=collapsed}} |state=expanded to show the template in its expanded state, i.e. fully visible – e.g. Template:List of seas. Ecoregion. A map location of the Amazon rainforest ecoregions. The yellow line encloses the ecoregions per the World Wide Fund for Nature. A map of North America's bioregions Three caveats are appropriate for all bio-geographic mapping approaches. Firstly, no single bio-geographic framework is optimal for all taxa. Ecoregions reflect the best compromise for as many taxa as possible. Definition and categorization[edit] The intended purpose of ecoregion delineation may affect the method used. A large area of land or water that contains a geographically distinct assemblage of natural communities that:(a) Share a large majority of their species and ecological dynamics;(b) Share similar environmental conditions, and;(c) Interact ecologically in ways that are critical for their long-term persistence.