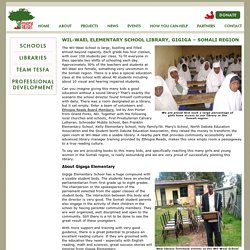 Each grade has four classes, with over 150 students per class. To fit everyone in they operate two shifts of schooling each day. Approximately 30% of the teachers and students at Wil-Wael are female, something very uncommon in the Somali region. There is a also a special education class at the school with about 40 students including about 10 visual and hearing impaired students. Can you imagine giving this many kids a good education without a sound library? To say we are providing books to this many kids, and specifically reaching this many girls and young women in the Somali region, is really astounding and we are very proud of successfully planting this library.

About Gigaga Elementary Gigiga Elementary School has a huge compound with a sizable student body. With more support and training with very good guidance, there is a great potential to produce an excellent reading culture. About Gigiga. Tshehay Chora Primary School in Addis Ababa. The Tshehay Chora Primary School, located in the capital city of Addis Ababa, was one of the few pioneer schools to establish a separate early grade library that targets grades K through 4. 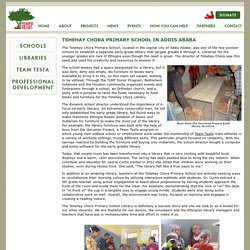 Libraries for the younger grades are rare in Ethiopia even though the need is great. The director of Tshehay Chora saw this need and used his creativity and resources to answer it. The school always had a space designated for a library, but it was dark, dirty and empty. No furniture or books were available to bring it to life, so this room sat vacant, waiting to be utilized. Qwiha Primary School in the Tigray Region. The library at the Qwiha Primary School was planted by Cynthia Calabrese and Mark Gelfand, a couple who have done much philanthropy in Ethiopia, mostly in the sciences. 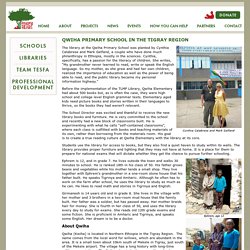 Cynthia, specifically, has a passion for the literacy of children. She writes, “My grandmother never learned to read, write or speak the English language. So my mother, as she grew and had her own children, realized the importance of education as well as the power of being able to read, and the public library became my personal information highway.” Before the implementation of the TLMP Library, Qwiha Elementary had about 500 books but, as is often the case, they were high school and college level English grammar texts. Elementary aged kids need picture books and stories written in their languages to thrive, so the books they had weren’t relevant. Libraries-TLMP-MulgetaGedilePrimarySchool. Mulugeta Gedile Primary School was established in 1949, making it one of the oldest schools in Ethiopia. 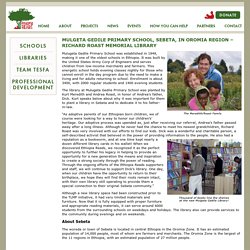 It was built by the United States Army Corp of Engineers and serves children from low-income merchants and farmers. This energetic school holds evening classes nightly for those who cannot enroll in the day program due to the need to make a living and for adults returning to school. Enrollment is about 3400, with 2000 regular students and 1400 evening students. The library at Mulugeta Gedile Primary School was planted by Kurt Meredith and Andrea Roast, in honor of Andrea’s father, Dick. Kurt speaks below about why it was important for them to plant a library in Sebeta and to dedicate it to his father-in-law. “As adoptive parents of our Ethiopian born children, we of course were looking for a way to honor our children’s’ heritage. Misrak Jegnoch Primary in Dire Dawa. The Misrak Jegnoch Primary Library in Dire Dawa library was planted by the Barsch Family from Denver who adopted a daughter from Ethiopia. 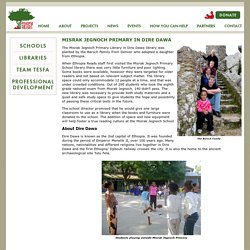 When Ethiopia Reads staff first visited the Misrak Jegnoch Primary School library there was very little furniture and poor lighting. Some books were available, however they were targeted for older readers and not based on relevant subject matter. The library space could only accommodate 12 people at a time, and that was under crowded conditions. Out of 290 students who took the eighth grade national exam from Misrak Jegnoch, 140 didn’t pass. Logiya Primary School in the Afar Region. The Logiya Primary School Library is the only TLMP Library yet to be planted. 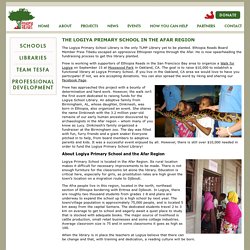 Ethiopia Reads Board Member Frew Tibebu escaped an oppressive Ethiopian regime through the Afar. He is now spearheading the fundraising process to get this library planted. Frew is working with supporters of Ethiopia Reads in the San Francisco Bay area to organize a Walk for Logiya on September 15 at Mosswood Park in Oakland, CA. Haik Dar School, Awassa, SNNP. Haik Dar School Library in Awassa became possible through a generous donation by Debbie Kampert, in honor of her daughter, Amy Lynn. 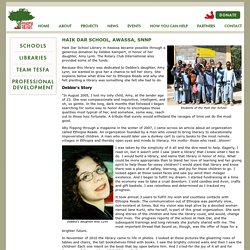 The Rotary Club International also provided some of the funds. Because this library was dedicated to Debbie’s daughter, Amy Lynn, we wanted to give her a chance to tell her story. She explains below what drew her to Ethiopia Reads and why she felt planting a library was something she felt she had to do. Debbie’s Story “In August 2005, I lost my only child, Amy, at the tender age of 23. Idly flipping through a magazine in the winter of 2007, I came across an article about an organization called Ethiopia Reads. I was taken by the simplicity of it all and the dire need to help. It took almost 3 years to fulfill my wish and countless contacts with Ethiopia Reads. Chankuar Dalkoch School Library in the Gambella Region. Before the donation from Cynthia Calabrese and Mark Gelfand that made the Dalkoch School Library possible, the room consisted of a few shelves of old storybooks and two bookcases of outdated textbooks. 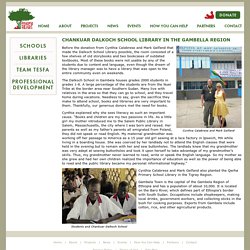 Most of these books were not usable by any of the students due to content and language, even though the dream of the library manager was to have a library that was open to the entire community even on weekends. The Dalkoch School in Gambela houses grades 2000 students in grades 1-8. A large percentage of the students are from the Nuer Tribe at the border area near Southern Sudan. Many live with relatives in the area so that they can go to school, and they travel home during vacations. Needless to say, given the sacrifice they make to attend school, books and libraries are very important to them. Cynthia explained why she sees literacy as such an important cause.