The ‘Horribly Mutated’ Seafood in The Gulf of Mexico 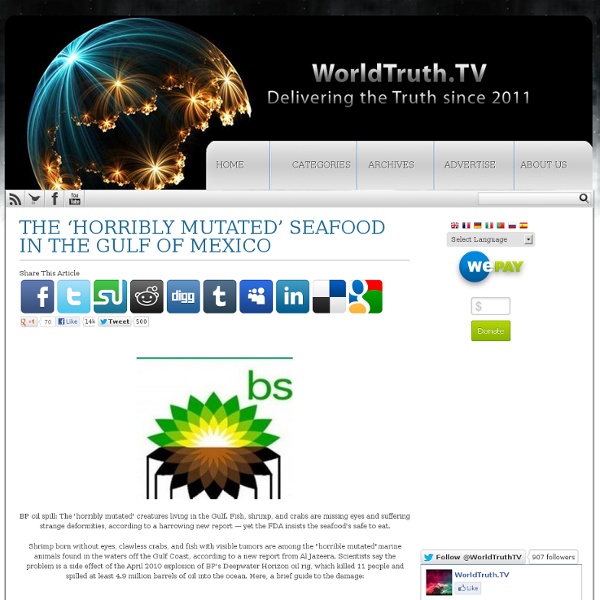 BP oil spill: The ‘horribly mutated’ creatures living in the Gulf. Fish, shrimp, and crabs are missing eyes and suffering strange deformities, according to a harrowing new report — yet the FDA insists the seafood’s safe to eat. Shrimp born without eyes, clawless crabs, and fish with visible tumors are among the “horrible mutated”marine animals found in the waters off the Gulf Coast, according to a new report from Al Jazeera. Scientists say the problem is a side effect of the April 2010 explosion of BP’s Deepwater Horizon oil rig, which killed 11 people and spilled at least 4.9 million barrels of oil into the ocean. Here, a brief guide to the damage: “The fishermen have never seen anything like this,” Dr Jim Cowan told Al Jazeera. Gulf of Mexico fishermen, scientists and seafood processors have told Al Jazeera they are finding disturbing numbers of mutated shrimp, crab and fish that they believe are deformed by chemicals released during BP’s 2010 oil disaster. What does BP say? Sources: Related:  Water • Pollution & it's effects.

Smartdust in the drinkable water, dust and urine (microscope samples) Sodium fluoride is used to make Sarin gas as well as clean teeth An article by anti-fluoridation campaigner Walter Graham provoked a strong response with one reader pointing out that one of toothpaste’s constituent parts is used to make sarin gas. Here are two letters, which have been slightly abridged due to space constraints. Stephen McMurray, Newtownabbey writes: I recently came across an article in your paper regarding fluoride. It is worth noting that despite the Government saying it is safe, only a few months ago, the Government was accusing the Syrian regime of using chemical weapons of mass destruction and the so-called proof was alleged documents which showed British companies had sold sodium fluoride to Syria. A, Wills, Ruislip, writes: The fluoride used in water fluoridation is fluorosilicic acid - toxic waste from factories.

“Experts” Push For Lithium To Be Added To Our Drinking Water Wakeup-World Apparently there are not enough chemicals already added to our drinking water, as there is now a call by “experts” to further poison our water supplies by adding Lithium. Their main reason is to decrease suicide and violent crime rates. So it this how we wish to function as a society? What is Lithium usually prescribed for? Bi polar disorder Agitation not associated with bipolar disorder Depression and to boost the effect of antidepressants As a mood stabiliser Sever Migraine Headaches“Much like fluoride, lithium alters the brain’s normal production of serotonin and norepinephrine, which in turn artificially alters the way an individual thinks and how he or she feels about a given situation. “Lithium has been heralded by some experts as the next potential flouride, after scientists found suicide rates were lower in areas where the drinking water had higher concentrations of the element, reports the Daily Mail” Source “Time to supplement? What are some side effects of Lithium?

A Sour Deception: Citric Acid Comes From GMO Black Mold, Not Fruit Aaron DykesActivist Post Just what is your food made of, anyway? Try industrial synthesis, genetically modified mold secretions, hydrochloric acid, mercury-contaminated caustic soda, ferrocyanide… and, of course, lots of GMO corn. If common ingredients like “citric acid” and “ascorbic acid (Vitamin C)” sound normal and familiar enough that you practically conjure up an image of the flourishing orchard they were grown in – then think again. Picture instead an industrial factory, carrying out protocols developed in a lab, produced with enough winding nozzles, tanks, valves, pipes and other thinga-ma-jiggers to create a meandering and disorienting Dr. Instead, mass produced citric acid and ascorbic acid are hidden GMO ingredients that reportedly set off allergenic responses for some sensitive consumers. Feel free to peruse these blogs and forums for complaints about citric acid from those allergic or intolerant to citric acid itself, mold & yeast and/or corn. Photo credit Aaron Dykes.

Fluoride - Adverse Health Effects Fluoride can be one of the most volatile and active harmful chemicals in the body. Fluoride can attack mercilessly, against any age group, but its effects are especially harmful to developing children and the elderly. The detrimental effects of fluoride are varied. Below is a list of some of the recently documented, harmful effects of drinking fluoridated water: 1) Fluoride is known to cause dental fluorosis, a defect of the tooth enamel caused by fluoride’s interference with developing teeth.

Fukushima now radiating everyone: 'Unspeakable' reality - National Human Rights CBS exposes extreme Fukushima radiation human rights violations while U.S. media remains silent Australia's CBS exposed the "unspeakable" realities of the Japanese catastrophe in its 60 Minutes program Sunday night during which leading nuclear scientist Dr. Michio Kaku said radiation from Fukushima will impact of all of humanity. "In fact the whole world will be exposed from the radiation from Fukushima," Dr. "We are already getting radiation from Fukushima," Dr. Just as Australia's SBS exposed in depth the reality of the 2010 BP Gulf of Mexico catastrophe unlike any U.S. mainstream news station, Sunday, Australia's CBS has now exposed in depth the Fukushima catastrophe. "The Fukushima crisis is far from over. As Hayes traveled through now deserted areas of rubble, that were once houses, toward Fukushima, the silence was shattered by the beeping of deadly gamma radiation fallout 40 kilometers from the crippled nuclear power plant. Introducing Dr. Dr. "Ah, knowingly? Dr.

Consumer Health Articles: FLUORIDE, THE SILENT KILLER FLUORIDE, THE SILENT KILLER by: Yiamouyiannis, John, Ph.D. Dr. Yiamouyiannis received his Ph.D. in biochemistry from the University of Rhode Island and served his post-doctoral fellowship at the Western Reserve University School of Medicine. He then became editor at Chemical Abstracts Service, the world's largest chemical information center, where he first became aware of the health damaging effects of fluoride. He is the former science director of the National Health Federation; he is the executive director of Health Action and president of the Safe Water Foundation. HARMFUL EFFECTS OF FLUORIDE Fluoride is used as an insecticide and a roach killer. FLUORIDE A BY-PRODUCT OF INDUSTRY Fluoride is an industrial waste product, a by-product of the aluminum industry and the phosphate fertilizer companies who have mountains of fluoride that is polluting the ground water. FLUORIDATED TOOTHPASTE Unless it says on the package does not contain fluoride, you are using fluoridated toothpaste.

Antibacterial soap pollutes rivers, adds to bacterial resistance (NaturalNews) New highly resistant strains of bacteria are showing up in urban water sources and regional streams and rivers. These new bacteria strains are rendering new antibiotics practically useless. New environmental studies from the Chicago metro-area are now reporting disturbing levels of powerful bacteria strains coming from specific urban areas that rely on single sewage pipes connected to combined sewer overflows. A paper published in the journal Environmental Science and Technology, unveils the causes behind the new strains of bacteria. The culprit: triclosan resistance in a natural environment. Triclosan is a synthetic antibacterial chemical often added to personal body care products. It is constantly being flushed down the sewage system. The chemical was initially invented as an antibacterial agent for surgeons in the 1960s. Honest body care manufacturers could start using natural antibacterial ingredients like grapefruit seed extract. Sources for this article include:

Leaked TTIP Documents Expose Chemical Industry’s Toxic Agenda A report published Monday by the Center for International Environmental Law (CIEL) and ClientEarth shows how a leaked proposal from chemical lobbying groups could damage future protective legislation on toxic chemicals. The documents, drafted by the American Chemistry Council and the European Chemical Industry Council, were injected into last December’s Transatlantic Trade and Investment Partnership (TTIP) negotiations—an action that exposes the extent of the chemical industry meddling into secretive and ongoing U.S.-EU trade talks. “This proposal illustrates two huge and interrelated problems with TTIP,” said Baskut Tuncak, staff attorney for the Center for International Environmental Law. The chilling effect of chemical industry interference with prospective TTIP regulations could include: slowing down the implementation of precautionary decisions on toxic chemicals, undermining democratic decision making and stifling the innovation of safer alternatives.

Sodium Fluoride: Rat Poison, Sarin Nerve Gas, Prozac, No antidote! | Planet iCare First of all, it needs to be stated that the ‘substance’ referred to as ‘Fluoride’ is a misnomer – there is no such substance listed in the periodic chart of the elements, nor in the prestigious CRC handbook, nor in the sacred ‘bible’ of the pharmaceutical industry – the illustrious ‘Merck Index’. Instead, we find a GAS called Fluorine – and from the use of this gas in various industries such as aluminum manufacturing and the nuclear industry -certain toxic byproducts are created which have ‘captured’ fluorine molecules. One such toxic, poisonous ‘byproduct’ is called sodium Fluoride – which according to the Merck Index is primarily used as rat and cockroach poison and is also the active ingredient in most toothpastes and as an “additive to drinking water”. To illustrate the emotional vs. the scientific nature of this issue, just look at the response given by people (perhaps yourself included?) Do you have diabetes and/or kidney disease? Apparently, the public outcry by Dr.

NASA Admits To Chemtrails As They Propose Spraying Stratospheric Aerosols Into Earths Atmosphere It’s really amazing how many people are waking up to the fact that “chemtrails” are different from “con-trails.” What was once considered a conspiracy to many is now a fact, chemicals are constantly sprayed into our atmosphere and have been for quite some time now. Not long ago, NASA personnel gave a lecture (that was also streamed live) at their Jet Propulsion Laboratory at the California Institute of Technology. It was a series of talks by scientists and engineers exploring the topic of Geoengineering and Climate Intervention. (1) Some of you might be thinking, “Geoengineering, what is that?” These programs are also considering spraying Aluminum into the atmosphere (if not already doing it). “There might be some good reasons to think about aluminum. The idea of spraying aluminum into our atmosphere goes way back, patents exist that clearly demonstrate the consideration of such materials that include the oxides of metals which have high emissivity. Below is a very informative video.

Enjoy The Radioactive Fish: Tests Show Fukushima Fish Are Up To 124X Above Safe Level Michael SnyderActivist Post Are you purchasing radioactive fish at the grocery store? Are you absolutely certain that you know the answer to that question? You are about to read about a test that discovered that a fish recently caught off the coast of the Fukushima prefecture was found to have 12,400 becquerels per kilogram of radioactive cesium. That is 124 times above the level that is considered to be safe. But it is not just fish caught off the coast of Japan that you need to be concerned about. Each day, another 300 tons of highly radioactive water is released into the Pacific Ocean at Fukushima, and that means that the total amount of radioactive material that is getting into our food chain is constantly increasing. Strangely, the mainstream media in the United States has been extremely quiet about all of this. That same article also noted that a fish that was caught last year near Fukushima contained a level of cesium that was actually far greater… Would you eat such a fish?