A Whopping 91 Percent of Plastic Isn’t Recycled. Here’s How Much Plastic Trash is Littering the Earth Mass production of plastics, which began just six decades ago, has accelerated so rapidly that it has created 8.3 billion metric tons—most of it in disposable products that end up as trash. 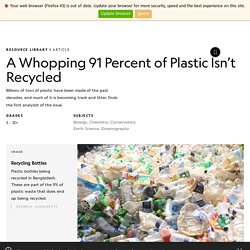 If that seems like an incomprehensible quantity, it is. Even the scientists who set out to conduct the world’s first tally of how much plastic has been produced, discarded, burned or put in landfills, were horrified by the sheer size of the numbers. Tips to Use Less Plastic - Green Education Foundation. Check out these easy ways you can start reducing your waste in your every day life! 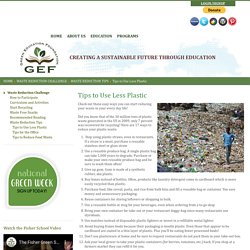 Recycling Quizes. Planet or Plastic? A Brief History of How Plastic Has Changed Our World. Plastics in the Ocean - Ocean Conservancy. You’ve probably seen videos of these impacts first hand, like a sea turtle with a plastic straw embedded in its nose or a whale entangled in a fishing net, approaching divers that release it from harm. 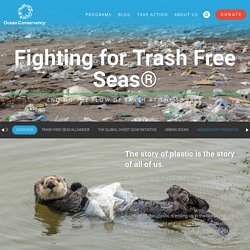 Some of these incidents have happy endings, but in reality, many more do not. Plastic has been found in more than 60% of all seabirds and in 100% of sea turtles species, that mistake plastic for food. And when animals ingest plastic, it can cause life-threatening problems, including reduced fitness, nutrient uptake and feeding efficiency—all vital for survival. “The tide of plastics entering the ocean can, indeed, be reversed.”Nicholas MallosDirector, Trash Free Seas®, Ocean Conservancy Every year, 8 million metric tons of plastics enter our ocean on top of the estimated 150 million metric tons that currently circulate our marine environments. In fact, plastic production and consumption are predicted to double over the next 10 years. Visualizing the Prolific Plastic Problem in Our Oceans. The rotation of planets have a dramatic effect on their potential habitability. 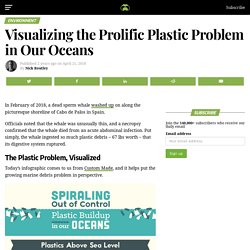 Dr. James O’Donoghue, a planetary scientist at the Japanese space agency who has the creative ability to visually communicate space concepts like the speed of light and the vastness of the solar system, recently animated a video showing cross sections of different planets spinning at their own pace on one giant globe. OR&R's Marine Debris Program. The Marine Debris Tracker mobile app, originating in 2010, is a joint initiative between the NOAA Marine Debris Program and the Southeast Atlantic Marine Debris Initiative(link is external) (SEA-MDI), run out of the University of Georgia College of Engineering. 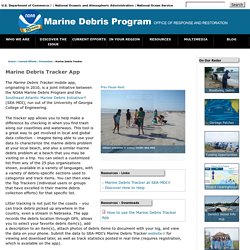 The tracker app allows you to help make a difference by checking in when you find trash along our coastlines and waterways. This tool is a great way to get involved in local and global data collection – imagine being able to use your data to characterize the marine debris problem at your local beach, and also a similar marine debris problem at a beach that you may be visiting on a trip. #OneLess - Tackling ocean plastic pollution at source. Let's Work Together - for a World Free of Plastic Pollution. Visualising the amount of microplastic we eat. 13 Reasons Why Plastic is bad & 4 product ideas that can replace plastic - Le... It is an undisputed fact that plastic and its effects have been one of the most discussed topics across the globe. 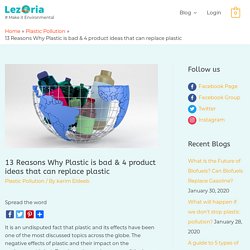 The negative effects of plastic and their impact on the environment is hot. People are becoming aware of the issues surrounding the use of plastic and how we can move forward. But, while people are saying different things about how and why we should consider using fewer plastic products, exactly why is plastic so harmful? This article will briefly explain 13 Reasons Why Plastic is bad & 5 product ideas that can replace plastic.

Now, Why Plastic is so bad for the environment and accordingly, for humans? What I like about these wraps that it is breathable and allows food to stay fresh longer, reducing food wastage. Here are more I recommend: Pack of 3 from Bee’s Wrap – This one has the highest ratings and most sale.Pack of 3 from Lily Bee Wrap – Classic design with dark coloursPack of 5 from MaeKit Green – Small and large sizes included Don’t ever wash them with hot water. 2. Why Toothpaste Comes in a Box? The Plastic Industry’s Fight to Keep Polluting the World. The students at Westmeade Elementary School worked hard on their dragon. 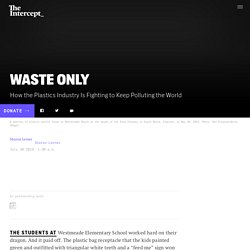 And it paid off. The plastic bag receptacle that the kids painted green and outfitted with triangular white teeth and a “feed me” sign won the students from the Nashville suburb first place in a recycling box decorating contest. The idea, as Westmeade’s proud principal told a local TV news show, was to help the environment. But the real story behind the dragon — as with much of the escalating war over plastic waste — is more complicated. Story of Stuff. Host A Screening - Plastic Oceans Foundation.

The Great Pacific Garbage Patch. Resulting from several research missions, travelling across and above the GPGP, The Ocean Cleanup team compiled an unprecedented amount of data to better understand the plastic that persists in this region. 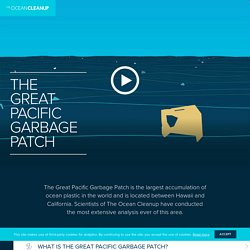 Research Expeditions Scientists have been studying this area since the 1970's - usually by means of dragging a small sampling net through the debris. This method showed a bias towards smaller objects and did not provide much insight into the larger pieces, and, thus, the entire scope of the GPGP. Over the course of three years, researchers at The Ocean Cleanup went on several data collection missions. The Great Pacific Garbage Patch - Explainer. TRASH TALK: Special Feature. Ocean Today premiered this 15-minute TRASH TALK special feature for World Ocean Day in 2016. 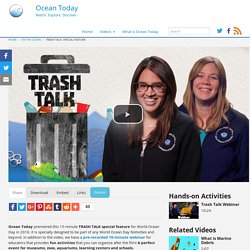 It is specially designed to be part of any World Ocean Day festivities and beyond. In addition to the video, we have a pre-recorded 10-minute webinar for educators that provides fun activities that you can organize after the film! A perfect event for museums, zoos, aquariums, learning centers and schools. On the right, under 'Related Videos', you will find each of the chapters contained in this special feature. Each stands on its own, so we have created a separate page that can be referenced. We love the ocean. Unfortunately, the ocean is being filled with trash. You probably already recycle, and that’s a great start. Ocean Today videos focus on both the ocean's influence on us and our influence upon the ocean.

Social Studies, Science, Engineering & Technology. Plastic in the Pacific. Synthetic Sea ..... NEW version for 2010. Tk intro5. The 28-Day Plastic Purge Challenge. Plastic Pollution Coalition - OPEN YOUR EYES - Overview Narrated by Jeff Bridges (2016) Is BPA on Thermal Paper A Health Risk? By Sandra Curtis If you haven’t heard yet that the chemical BPA in cash register receipts and credit/debit machines can be a health risk, you might want to know a few facts. 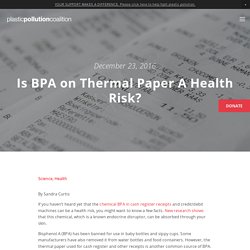 New research shows that this chemical, which is a known endocrine disruptor, can be absorbed through your skin. Bisphenol A (BPA) has been banned for use in baby bottles and sippy cups. Some manufacturers have also removed it from water bottles and food containers. However, the thermal paper used for cash register and other receipts is another common source of BPA. “There’s more BPA in a single thermal paper receipt than the total amount that would leach out from a polycarbonate water bottle used for many years,” said John Warner, Ph.D., president of the Warner Babcock Institute for Green Chemistry.

Research has linked BPA to an increased risk of breast and prostate cancers, cardiovascular disease, and reproductive and brain development abnormalities. So what should you do to reduce your exposure? Host A Screening - Plastic Oceans Foundation. Bag It The Movie. Since Bag It's Since Bag It's premiere in 2010, over 2,500 festivals, nonprofits, theaters, churches and community organizations have hosted screenings of Bag It across the world! We invite you to host a screening in your community next.

To order a public exhibition for schools or libraries, please be in touch with our Educational Distributor, New Day Films or click on the button below. Then, take a peek at our Bag It Screening Tool Kit for ideas about planning your event! Bag It invites you to make a difference in your community! For a tax-deductible donation of $750, Bag It Education Advocates receive 10 Bag It Educational DVDs and companion curriculum guides to donate to local schools or libraries. Visit our Frequently Asked Questions Page for answers to common queries.