A Bigger Problem Than ISIS? On the morning of August 7, 2014, a team of fighters from the Islamic State, riding in pickup trucks and purloined American Humvees, swept out of the Iraqi village of Wana and headed for the Mosul Dam. 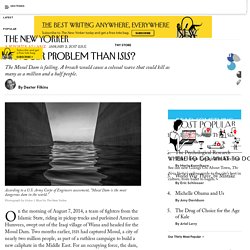 Two months earlier, ISIS had captured Mosul, a city of nearly two million people, as part of a ruthless campaign to build a new caliphate in the Middle East. For an occupying force, the dam, twenty-five miles north of Mosul, was an appealing target: it regulates the flow of water to the city, and to millions of Iraqis who live along the Tigris. As the ISIS invaders approached, they could make out the dam’s four towers, standing over a wide, squat structure that looks like a brutalist mausoleum.

Getting closer, they saw a retaining wall that spans the Tigris, rising three hundred and seventy feet from the riverbed and extending nearly two miles from embankment to embankment. Behind it, a reservoir eight miles long holds eleven billion cubic metres of water. In February, the U.S. The U.S. Scientists are frantically copying U.S. climate data, fearing it might vanish under Trump. A satellite image of Hurricane Otto approaching the coast of Central America on Nov. 24. 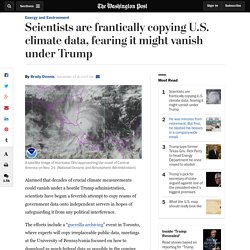 (National Oceanic and Atmospheric Administration) Alarmed that decades of crucial climate measurements could vanish under a hostile Trump administration, scientists have begun a feverish attempt to copy reams of government data onto independent servers in hopes of safeguarding it from any political interference. The efforts include a “guerrilla archiving” event in Toronto, where experts will copy irreplaceable public data, meetings at the University of Pennsylvania focused on how to download as much federal data as possible in the coming weeks, and a collaboration of scientists and database experts who are compiling an online site to harbor scientific information. [Trump taps former Texas Gov. Rick Perry to head Energy Department he once vowed to abolish] [Energy Dept. rejects Trump’s request to name climate change workers, who remain worried] “What are the most important .gov climate assets?” Business. NOAA: Warming-Driven Sea Level Rise To Make Sandy-Type Storm Surges The Norm On East Coast. 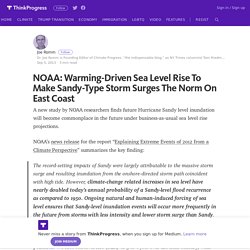 NOAA’s news release for the report “Explaining Extreme Events of 2012 from a Climate Perspective” summarizes the key finding: The record-setting impacts of Sandy were largely attributable to the massive storm surge and resulting inundation from the onshore-directed storm path coincident with high tide. However, climate-change related increases in sea level have nearly doubled today’s annual probability of a Sandy-level flood recurrence as compared to 1950. Ongoing natural and human-induced forcing of sea level ensures that Sandy-level inundation events will occur more frequently in the future from storms with less intensity and lower storm surge than Sandy. So we have nearly doubled the chances for a Sandy-type storm surge with just the modest several-inch sea level rise we have caused to date with carbon pollution. 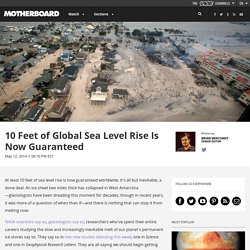 An ice sheet two miles thick has collapsed in West Antarctica—glaciologists have been dreading this moment for decades, though in recent years, it was more of a question of when than if—and there is nothing that can stop it from melting now. NASA scientists say so, glaciologists say so, researchers who've spent their entire careers studying the slow and increasingly inevitable melt of our planet's permanent ice stores say so.

They say so in two new studies debuting this week; one in Science and one in Geophysical Research Letters. They are all saying we should begin getting comfortable with sea levels that lap up 10 feet higher on our shores. Long before the collapse of West Antarctica's Thwaites ice sheet, an organization called Climate Central created this interactive map, which shows how various levels of sea level rise will impact the United States. Global Forest Watch Water. We can't wait 4 years: 800 climate scientists have united for immediate action. Coach Designations Self Assessment March 2014. FEMA Issues Latest Update to Flood Risk Analysis and Mapping Standards. Shelters Database Management.