3D printing - What can you print?

Page. Patient 3D prints his own kidney to guide surgeons. Despite having millions of dollars of imaging technology at their disposal, surgeons often have to wait until they open a patient up before deciding the best course of action. 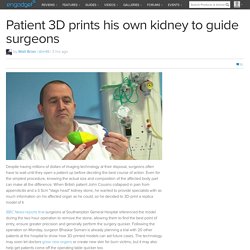 Even for the simplest procedure, knowing the actual size and composition of the affected body part can make all the difference. When British patient John Cousins collapsed in pain from appendicitis and a 3.5cm "stags head" kidney stone, he wanted to provide specialists with as much information on his affected organ as he could, so he decided to 3D-print a replica model of it. BBC News reports that surgeons at Southampton General Hospital referenced the model during the two hour operation to remove the stone, allowing them to find the best point of entry, ensure greater precision and generally perform the surgery quicker. Following the operation on Monday, surgeon Bhaskar Somani is already planning a trial with 20 other patients at the hospital to show how 3D printed models can aid future cases. So 3D Printed Prosthetic Legs Are Now A Thing. When folks aren’t too busy using 3D printers to create alleged replicas of Justin Bieber’s dong or wristbands that record TV for sleepy couch potatoes, they actually create useful items. 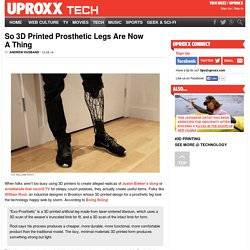 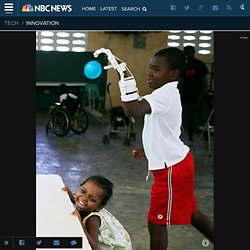 Stevenson Joseph, who has lived at an orphanage since he was abandoned at the age of 3, had little hope of treatment in a country where programs for the disabled are rare. But after he met John Marshall, a software engineer on a mission trip to Haiti for Florida-based Food for the Poor, his prospects changed. Bored on your holiday break? 3D printing some LEGO bricks.

Is there anything 3-D printing can’t do? 3D-printed car saves money, energy. A 3D-printed electric car that is about to go into production boasts an ultra-strong, ultra-light chassis that can take on the rigours of the highway with ease. 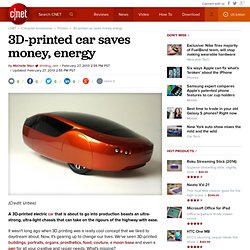 It wasn't long ago when 3D printing was a really cool concept that we liked to daydream about. Now, it's gearing up to change our lives. We've seen 3D-printed buildings, portraits, organs, prosthetics, food, couture, a moon base and even a pen for all your creative and repair needs. What's missing? Plans for fully 3D-printed gun go online next week. Defense Distributed, the pending non-profit that plans to make 3D-printed weaponry available for anyone with such a printer, will release the blueprints for a fully-working plastic firearm next week. 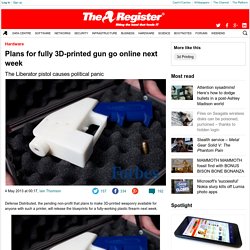 Here at last – your own printed pistol The handgun, seen by Forbes, uses 16 printed parts that are clipped together and can be fitted with interchangeable barrels to fire different-caliber rounds. The only non-printed part needed to fire is a simple nail, which acts as the firing pin. Final testing for the firearm is still ongoing by the group's founder Cody Wilson, who said that the plans should be online next week.

The Liberator is printed from ABS plastic using a Dimension SST printer from Stratasys – although that company has already refused Defense Distributed the use of one of its printers. "Everyone talks about the 3D printing revolution," Wilson said. Not the most deadly weapon available in the US. 3-D Printing Company Confiscates Wiki Weapon Project's Printer. Meet The 'Liberator': Test-Firing The World's First Fully 3D-Printed Gun. 3D-Printed Gun Makes It Through Transportation Security Undetected. After Defense Distributed completed its first functional handgun made completely with a 3D printer, lawmakers began calling for a ban of the use of the technology for such purposes as it would make weapons undetectable, posing a security threat. 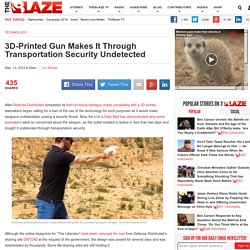 Now, the U.K.’s Daily Mail has demonstrated why some lawmakers were so concerned about the weapon, as the outlet created a replica in less than two days and bought it undetected through transportation security. Defense Distributed founder Cody Wilson firing the 3D-printed handgun. (Image: YouTube screenshot) Although the online blueprints for “The Liberator” have been removed for now from Defense Distributed’s sharing site DEFCAD at the request of the government, the design was posted for several days and was downloaded by thousands. Some file-sharing sites are still hosting it. The Daily Mail used a £1,700 (about $2,613) 3D printer to create all the components of .38 caliber gun within a 36-hour period. Related: The Constitution And The 3D Printed Plastic Pistol. By now, you have probably heard about the Liberator, a 3D printed plastic gun designed, assembled, and test-fired by Cody Wilson of Defense Distributed. 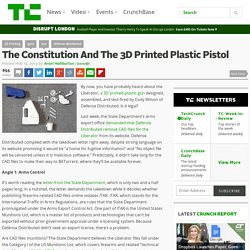 Is it legal? Last week, the State Department’s arms export office demanded that Defense Distributed remove CAD files for the Liberator from its website. Defense Distributed complied with the takedown letter right away, despite strong language on its website promising it would be “a home for fugitive information” and “No object file will be censored unless it is malicious software.” Predictably, it didn’t take long for the CAD files to make their way to BitTorrent, where they’ll be available forever. 3D printed guns are going to create big legal precedents. By now, everyone's heard about the 3D printed gun that Defense Distributed demonstrated last week. 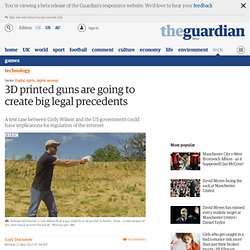 The Texas-based group has been steadily working its way up the 3D printed firearms evolutionary ladder, making parts for guns, then guns themselves, then firing a gun, then making the plans for running up your own pistols on a nearby 3D printer. Printing 3D Houses. A New Plan For A 3-D Printed House That's Actually House-Like. Architects are starting to 3D print houses—but without a house-sized printer. A couple of months ago, Dutch architect Janjaap Ruijssenaars announced that he was building a curvy, loopy and for some reason, largely see-through building, to be made with the help of Enrico Dini’s D-Shape 3D printer. 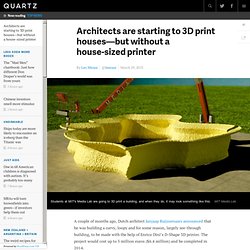 The project would cost up to 5 million euros ($6.4 million) and be completed in 2014. Janjaap Ruijssenaars’s twisty, loopy 3D-printed building. Universe Architecture Another group quickly piped up, declaring that a similar project they were working on would be done even faster and cheaper. London-based Softkill Design intends to fabricate a web-like building and what’s more, it says it will need just three weeks to print the structure—and only a single day to assemble it, which it plans to do at some point later this year. 3D printer can build a house in 20 hours. 3D PreFab Home - Fabbaloo Blog - Fabbaloo. 3D printed moon building designs revealed. 1 February 2013Last updated at 12:21 GMT The protective shell of the building is designed to be constructed on site by 3D printers Architects Fosters and Partners have revealed designs for a building on the Moon that could be constructed from material already on its surface. 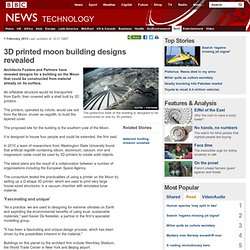 An inflatable structure would be transported from Earth, then covered with a shell built by 3D printers. The printers, operated by robots, would use soil from the Moon, known as regolith, to build the layered cover. The proposed site for the building is the southern pole of the Moon. It is designed to house four people and could be extended, the firm said. In 2010 a team of researchers from Washington State University found that artificial regolith containing silicon, aluminium, calcium, iron and magnesium oxide could be used by 3D printers to create solid objects.

3D printer to carve out world's first full-size building. Sure, we've heard of 3D-printed iPhone cases , dinosaur bones , and even a human fetus -- but something massive, like a building? This is exactly what architect Janjaap Ruijssenaars has been working on. The Dutch native is planning to build what he calls a "Landscape House. " This structure is two-stories and is laid out in a figure-eight shape. The idea is that this form can borrow from nature and also seamlessly fit into the outside world. Ruijssenaars describes it on his Web site as "one surface folded in an endless mobius band," where "floors transform into ceilings, inside into outside. "

The high-precision 3-D printer at TU Vienna is purportedly orders of magnitude faster than similar devices and opens up new areas of applications, such as in medicine. The super-fast nano-printer uses a liquid resin, which is hardened at precisely the correct spots by a focused laser beam. The focal point of the laser beam is guided through the resin by movable mirrors; it leaves behind a hardened line of solid polymer just a few hundred nanometers wide. The result is a detailed sculpture measuring a couple hundred micrometers in length. "Until now, this technique used to be quite slow," said Professor Jürgen Stampfl from the Institute of Materials Science and Technology at the TU Vienna. The video below shows the 3-D printing process in real time. Technische Universität Wien : 3D-Printer with Nano-Precision. A 285 µm racecar, printed at the Vienna University of Technology Detail of the racecar A model of St.

However, developing printable, flexible energy-storage devices, such as supercapacitors and batteries has lagged behind. Print-on-Demand Power. It’s now possible to print out components for flexible circuits, resilient displays, and even lightweight x-ray imaging panels. But conventional energy-storage devices still weigh down these printed electronics. Now researchers have made the first printable supercapacitor. Incredible: 3D Printed Lightbulbs From Disney Research. 3D printing clearly has a ton of potential when it comes to revolutionizing home manufacturing for both creators and consumers, but there’s also no denying that we’re still a ways from mainstream penetration — where the average person is able to print everything from dinnerware to working electronic devices on the fly (…damn you, future people).

Luckily for us, today’s experiments gradually take us closer to future practicality and provide a glimpse at what’s coming. This is the case with Disney Research and its new experiments with printed optics. As you’ll see in the video and pictures below, 3D printing has the potential to enable functional and interactive objects to be built on the fly — instead of just interesting models and prototypes. The first 3D-printed battery is as tiny as a grain of sand. Imagine a computer so small it could slip through the human bloodstream. Video: e-ink finds new life in bendable computers. Paperphone is a handheld computer that's as thin as a sheet of paper -- and just as flexible too. With rumors swirling that Amazon was preparing to get into the tablet making business, it seemed to be just another indication that electronic ink was surely destined to fade into gray.

Plastic E-Reader Debut  This Wednesday, Cambridge University startup Plastic Logic, which is headquartered in Mountain View, CA, will open a factory in Dresden, Germany, that will produce about 11 million large, flexible electronic-paper display units a year. The displays will be used in an electronic reader that the company showed at the Demo conference in San Diego last week. Print your own Google Glass and look the part. Han Solo, Honest Abe, and even Aristotle are just a few of the people who look absolutely fantastic wearing their Google Glass computers. But unless you're a deep-pocketed developer from the US, chances are nil of getting anywhere near the audacious $1,500 spectacles.

So why not do the next best thing and print a pair? That's exactly what Sander Veenhof and Klasien van de Zandschulp did, whom I discovered this morning in an Amsterdam cafe cheerfully muttering nonsense into their oblivious eyewear. Stunning 3D-Printed Guitars Will Blow You Away [PICS] 3D printing offers ability to print physical objects. 25 November 2010Last updated at 09:53. 5 Axis Robot Carves Metal Like Butter (Video. World's first 'printed' airplane takes to the skies. Southampton engineers fly the world’s first ‘printed’ aircraft. Are 3D-Printed Fabrics the Future of Sustainable Textiles? Step into the world of 3D-printed tech couture. 3D-printed dress for Dita Von Teese.