'...In New Jersey, a police officer pleaded not guilty to charges that he crashed his car into his ex-wife's and then shot her a dozen times while their seven-year-old daughter watched from the front seat.' 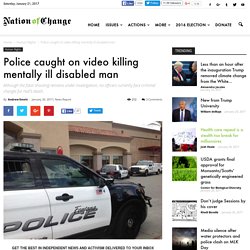 Although the police initially claimed the disabled man lunged at the officers with a weapon, the footage does not corroborate with the official version of events. According to the police report, the Fontana Police Department received a 911 call from a convenience store clerk reporting a possible robbery in progress at approximately 4:15 a.m. on November 22, 2015. Upon arrival, officers located James Hall, 47, in front of the store allegedly holding a knife in one hand and a large rock in the other. In the newly released surveillance video, several officers followed Hall into the store before discharging a weapon and releasing a K9 unit.

Legally blind and diagnosed with schizoaffective disorder, Hall was pronounced dead at the scene. Police Fatally Shoot 66-Year-Old Woman in Bronx. Police shot and killed a 66-year-old woman in a Bronx apartment on Tuesday after she allegedly tried to strike an officer with a baseball bat. 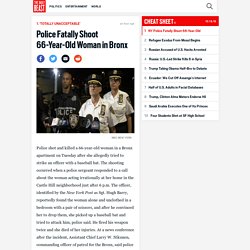 The shooting occurred when a police sergeant responded to a call about the woman acting irrationally at her home in the Castle Hill neighborhood just after 6 p.m. The officer, identified by the New York Post as Sgt. Hugh Barry, reportedly found the woman alone and unclothed in a bedroom with a pair of scissors, and after he convinced her to drop them, she picked up a baseball bat and tried to attack him, police said. He fired his weapon twice and she died of her injuries. At a news conference after the incident, Assistant Chief Larry W.

Video: Louisiana Police Shoot 6-Year-Old. Introducing a “lightning round” during Wednesday evening’s Libertarian town-hall meeting on MSNBC, host Chris Matthews said, “This is where we have fun, and maybe make some news.” 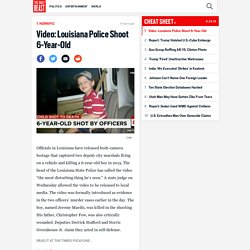 Third-party candidate Gary Johnson ended up doing the latter when he was asked to name his favorite world leader and drew a complete blank. Johnson’s running mate, Bill Weld, attempted to save him by jumping in to name recently deceased former Israeli Prime Minister Shimon Peres as his favorite, but Matthews wouldn’t let Johnson off the hook, asking him to name any living foreign leader. “Any continent, Canada, Mexico, Europe, Asia, South America, Africa, name a foreign leader that you respect,” Matthews implored. Unarmed Black Man Lying In The Street With Hands Up Gets Shot By Police In North Miami.

Fresno Police Release Body Camera Video Showing Shooting Of Unarmed White Man. Widow Seeks Justice for Husband Killed By Police - Daniel Shaver Pleaded For His Life. Advertisement - Continue Reading Below Daniel Shaver, a 26-year-old husband and father of two from Texas, was on a business trip to Arizona on January 18, when a police officer shot and killed him in a La Quinta Inn & Suites — as he begged for his life. 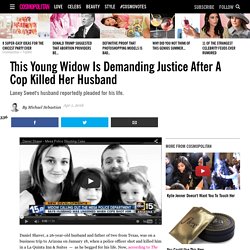 Now, according to The Arizona Republic, the officer, Philip "Mitch" Brailsford, is charged with second-degree murder and fired from the Mesa, Arizona police force. The story of Shaver's death and the aftermath is heartbreaking, angering and, in part, confusing. A report that includes eye-witness accounts, audio and video of the incident reveals that Shaver was on the ground, crying and crawling towards Brailsford while he pleaded for his life. Study: Suspects shocked by Taser “more likely” to waive Miranda Rights. A new study says the obvious: suspects' brains are briefly scrambled when they are on the receiving end of a Taser stun gun and its 50,000-volt delivery. 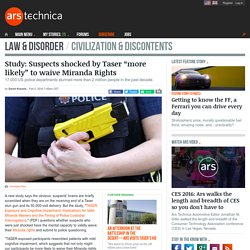 But the study, "TASER Exposure and Cognitive Impairment: Implications for Valid Miranda Waivers and the Timing of Police Custodial Interrogations," (PDF) questions whether suspects who were just shocked have the mental capacity to validly waive their Miranda rights and submit to police questioning. "TASER-exposed participants resembled patients with mild cognitive impairment, which suggests that not only might our participants be more likely to waive their Miranda rights directly after TASER exposure, but also they would be more likely to give inaccurate information to investigators," reads the study, which appears in the journal Criminology & Public Policy. 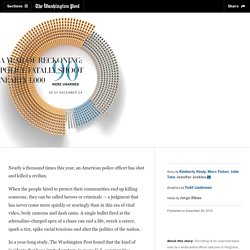 Now she’s zapped him with her Taser and he’s writhing on the ground, on snow, jammed up against a line of trees. Viewed through the camera attached to the officer’s Taser, Kassick reacts to each of three shocks from the stun gun. Miami cops have shot six people since Friday — but only recovered a gun in one case. Police in the Miami area shot five people over the weekend and one on Tuesday. 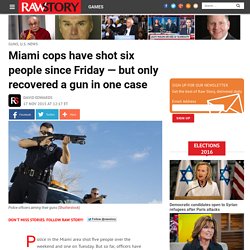 But so far, officers have claimed that only one of the suspects had a weapon. The Miami Herald reported that two officers two from Miami-Dade and one from South Miami shot five suspects between Friday night and Sunday night. A sixth suspect was shot on Tuesday. In at least five of the cases, officers said that they were forced to open fire because they feared for their lives. The Counted: people killed by police in the United States in 2015 – interactive. The Counted is a special Guardian project to record all people killed by police in the United States this year. 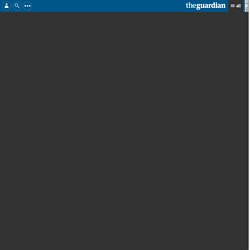 We have gathered information from official databases and crowdsourced counts to create a full and detailed view of killings by law enforcement agents in the US. This page shows the names and, where possible, faces of those killed since January 1 2015, as well as other details about the manner of their deaths and the status of any investigations into the incidents. You can see these incidents mapped throughout the United States, and read more about the methodology of the project here. Texas cops respond to suicide attempt, shoot Hispanic man — and then find out he’s a deputy. The mother of a Texas deputy said this week that Laredo police officers did not have a good reason to shoot and kill her son after they showed up at his apartment to respond to an attempted suicide. 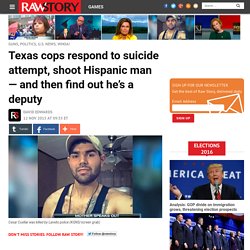 The Laredo Morning Times reported on Monday that two female officers responded to a suicide attempt at around 11 a.m. The department said that the officers opened fire after “repeated commands to the individual who was armed with a handgun.” Unarmed marijuana dealer shot in face and killed by cop who won’t face charges. Derek Cruice was a kind and loving young man who was murdered in cold blood by state agents because he allegedly sold a plant that is legal in five states. 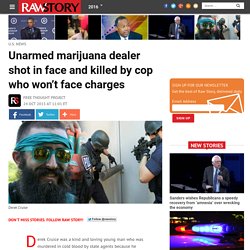 In March, a heavily militarized police SWAT team, knowing that Cruice had never been convicted of a crime, descended on his home on Maybrook Drive in Deltona. Police did not knock. Instead, they used a battering ram to bust down the door, sending multiple heavily armed storm troopers into the house. Why Did A Cop Shoot Robert Chambers In The Head? An Unarmed Teen Flashed His Brights At A Cop And Ended Up Dead. Reports claim shooting of unarmed 12-year-old Tamir Rice was justified. Don't miss stories. Huffingtonpost. The Fifteen Most Outrageous Responses by Police After Killing Unarmed People. Police kill a lot of unarmed people. So far in 2015, as many as 100 unarmed people have been killed by police. Here are fifteen of the most outrageous reasons given by police to justify killing unarmed people in the last twelve months.

First, a bit of background. So far in 2015, there have been around 400 fatal police shootings already; one in six of those killings, 16 percent, were of unarmed people, 49 had no weapon at all and 13 had toys, according to the Washington Post. Of the police killings this year less than 1 percent have resulted in the officer being charged with a crime. One. Two. Girl who watched Wichita cops gun down her dad grows up to see cops gun down her war veteran son.

When Beverly Alford-Allen’s son suffered a mental breakdown last summer, she was afraid to call 911 out of fear that it would mean a death sentence for the Iraq War veteran. But the desperate woman called police, anyway — and her worst fears were realized. Police Killed An Unarmed White Man In Iowa And His Community Didn't Seem To Notice. A few minutes before Des Moines police killed Ryan Keith Bolinger Tuesday night, the 28-year-old white man was dancing in the street, according to an officer. Police didn't find the display funny. In a news conference Wednesday, Des Moines Police Sgt. Jason Halifax said Bolinger had earlier pulled up beside the squad car of an officer who was conducting an unrelated traffic stop, parking his 2000 Lincoln sedan so close that he blocked the police cruiser's driver's side door. Bolinger then left his vehicle and danced around before getting back in and driving away. 137 Shots, No Convictions: Cleveland Cop Acquitted in Killing of Unarmed African-American Pair.

This is a rush transcript. Copy may not be in its final form. AARON MATÉ: The national conversation on policing African-American communities is focused on Cleveland today after a major federal settlement and a controversial verdict. The Justice Department has reached an agreement with Cleveland over a pattern of what it calls "unreasonable and unnecessary" force by police. A probe last year found unlawful abuses across hundreds of cases. The federal settlement could lead to independent oversight and revised policies.

This comes just days after an acquittal in a case that helped launch the probe. AMY GOODMAN: The chase involved speeds of up to 100 miles per hour. JUDGE JOHN O’DONNELL: I find, by a preponderance of the evidence, that Brelo’s decision to use deadly force against Russell and Williams was based on probable cause to believe that they threatened imminent serious bodily harm to him and the other officers, not to mention the public. RENEE ROBINSON: That was my cousin! REV. REV. Man's 'World Destroyed' After San Diego Cop Kills Burberry The Service Dog. Three Shootings In Vallejo - BuzzFeed News. Bungled $60 Meth Bust Ends With Albuquerque Cop Gunning Down Undercover Narcotics Officer. Cleveland police shoot 12-year-old boy holding toy gun. Beauty and Police.

Aura Rosser, a forty-something Black mother of three, was shot to death by police here in Ann Arbor, on November 9, 2014. What kind of human being was she? At the moment the answer depends on what the police suggest (drug addict) and what her sister is reported to have said (an artist). Company Makes Gun Tech That Could Help Prevent Police Brutality. Police Pleasantly Surprised To Learn Man They Shot Was Armed. Sean Groubert, South Carolina State Trooper, Fired & Arrested After Shooting Unarmed Man. Florida deputies gun down man in towing dispute as son tried to explain he was deaf. LA-County-Law-Enforcement-Use-of-Force-2007-2014-Final.pdf. Police Kill Woman, Charge Man They Were Trying To Shoot With Murder.

How cops get away with it: Why the government can read your emails, but not count shooting deaths. The shooting of teenager Michael Brown has focused the nation (again) on the dangers faced by young, unarmed black men walking the streets of America. Video shows police shot Ohio man ‘on sight’ as he leaned on toy gun in Walmart, attorney says. We're Compiling Every Police-Involved Shooting In America. Help Us. This is a great idea, but can I make some suggestions on your data collection that will make this way easier to work with down the road? 1. Instead of letting people data into the spreadsheet, consider using Google forms: 2. The federal government has a standard system for classifying race data: American Indian or Alaska Native, Asian, Black or African American, Native Hawaiian or Other Pacific Islander, and White. "Hispanic" is usually coded separately (either "Hispanic or Latino origin," or "Not of Hispanic or Latino origin.