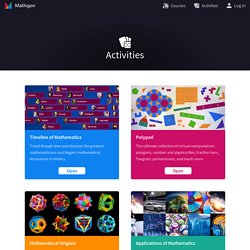 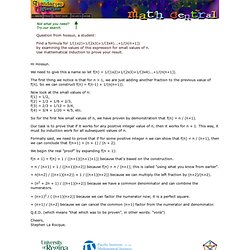 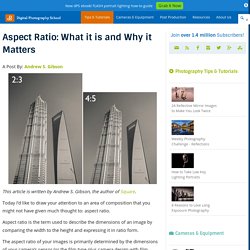 Gibson, the author of Square. Today I’d like to draw your attention to an area of composition that you might not have given much thought to: aspect ratio. Aspect ratio is the term used to describe the dimensions of an image by comparing the width to the height and expressing it in ratio form. Best Statistics Question Ever. CEMC - Math Circles. The Waterloo Math Circles is a free weekly enrichment activity for grade 6 to 12 students organized by the Faculty of Mathematics of the University of Waterloo. 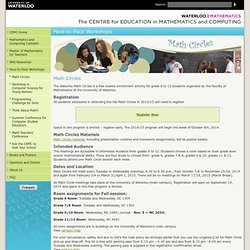 Registration All students interested in attending the Fall Math Circles in 2014/15 will need to register. Space in the program is limited – register early. The 2014/15 program will begin the week of October 6th, 2014. Canadian Mathematical Society. Dave's Short Trig Course. Table of Contents Who should take this course? 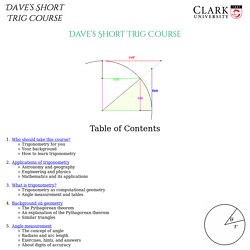 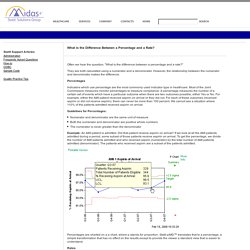 " They are both calculated using a numerator and a denominator. However, the relationship between the numerator and denominator makes the difference. Percentages Indicators which use percentage are the most commonly used indicator type in healthcare. Most of the Joint Commission measures monitor percentages to measure compliance. Fields Institute - Math Circles. NEWS 2014: Math Circles Instructors wanted! 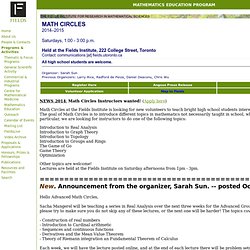 (Apply here) Math Circles at the Fields Institute is looking for new volunteers to teach bright high school students interesting topics in mathematics. The goal of Math Circles is to introduce different topics in mathematics not necessarily taught in school, while keeping things fun! In particular, we are looking for instructors to do one of the following topics: Introduction to Real Analysis Introduction to Graph Theory Introduction to Topology Introduction to Groups and Rings The Game of Go Game Theory Optimization Other topics are welcome! Hello Advanced Math Circles, Sacha Mangerel will be teaching a series in Real Analysis over the next three weeks for the Advanced Group. Ed Barbeau. Lattice Multiplication. Linear Equations (modeling) Math as Artistry. I have a treat for readers today, an interview I did recently with Steven Strogatz, mathematician and writer on math extraordinaire. 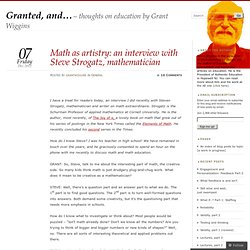 Strogatz is the Schurman Professor of applied mathematics at Cornell University. He is the author, most recently, of The Joy of x, a lovely book on math that grew out of his series of postings in the New York Times called the Elements of Math. He recently concluded his second series in the Times. How do I know Steve? I was his teacher in high school! GRANT: So, Steve, talk to me about the interesting part of math, the creative side. STEVE: Well, there’s a question part and an answer part to what we do. How do I know what to investigate or think about? Mathematical Association of America. Mathologer. MathsStarters - a great start to your maths lesson. MindYourDecisions. Multiplication Strategies. Nth term of sequence. National Museum of Mathematics. Quadrilaterals In Depth. There are many different kinds of quadrilaterals, but all have several things in common: all of them have four sides, are coplanar, have two diagonals, and the sum of their four interior angles equals 360 degrees. 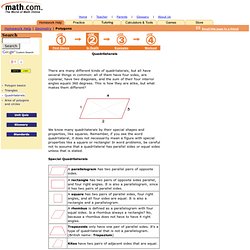 This is how they are alike, but what makes them different? We know many quadrilaterals by their special shapes and properties, like squares. Remember, if you see the word quadrilateral, it does not necessarily mean a figure with special properties like a square or rectangle! In word problems, be careful not to assume that a quadrilateral has parallel sides or equal sides unless that is stated.

Special Quadrilaterals. Short Problems for Practice and Revision. Similar Triangles Applications. Image Source: A powerful Zoom lens for a 35mm camera can be very expensive, because it actually contains a number of highly precise glass lenses, which need to be moved by a tiny motor into very exact positions as the camera auto focuses. 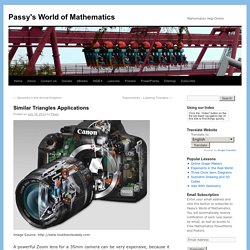 The Geometry and Mathematics of these lenses is very involved, and they cannot be simply mass produced and tested by computer robots. Lots of effort required to manufacture these lenses results in their very high price tags. Here is a diagram showing how the zoom lens internal arrangement changes as we zoom from 18mmm wide angle to 200mm fully zoomed in: Image Source: Some Mathematical GIFs. Here are some GIFs I have collected over internet that explain mathematical ideas. The following GIF explain what is meant by tangent/parallel lines and asymptotes. The following GIF explains how to construct a regular heptagon using straight edge and compass. The following 2 GIFs explain what an ellipse is and how to draw it. The area of the circle with unit radius is and so is the circumference of the circle with unit diameter. The following GIF explain a method to find the Golden Ratio (

Solar System Model in Nevada Desert. Stats: Binomial Probabilities. Binomial Experiment A binomial experiment is an experiment which satisfies these four conditions A fixed number of trials Each trial is independent of the others There are only two outcomes The probability of each outcome remains constant from trial to trial. These can be summarized as: An experiment with a fixed number of independent trials, each of which can only have two possible outcomes. The fact that each trial is independent actually means that the probabilities remain constant. Examples of binomial experiments Tossing a coin 20 times to see how many tails occur. The Math Circle. The Unexpected Math behind Van Gogh's "Starry Night". A few lesson plans exist for teaching visual arts and self-similarity (objects that have the same pattern) that could be used after showing this lesson.

Shodor has some free lesson plans for students in grades 4 through 8. High school students can learn recursion algorithms to create the Koch curve using Scratch for free. Educational technologist Dylan Ryder has also written about creating fractals. A beautiful app worth checking out is Starry Night Interactive App by media artist Petros Vrellis. Download it to your tablet and create your own version of Starry Night. Really interested in mathematics? Turbulence, unlike painting, is mostly a time-dependent phenomenon, and after some time, breaks statistical self-similarity that Kolmogorov predicted in the 1960s.

In fluid mechanics, since we can't often solve the equation for flow patterns, we develop a system of scaling between the physical properties. Visual Patterns. Wolfram.